The Most Interesting Priest in the World

World War I battlefields, Henry Ford, Rum-running Gangsters and the KKK all met their match in the dynamo, Father Vincent Toole. 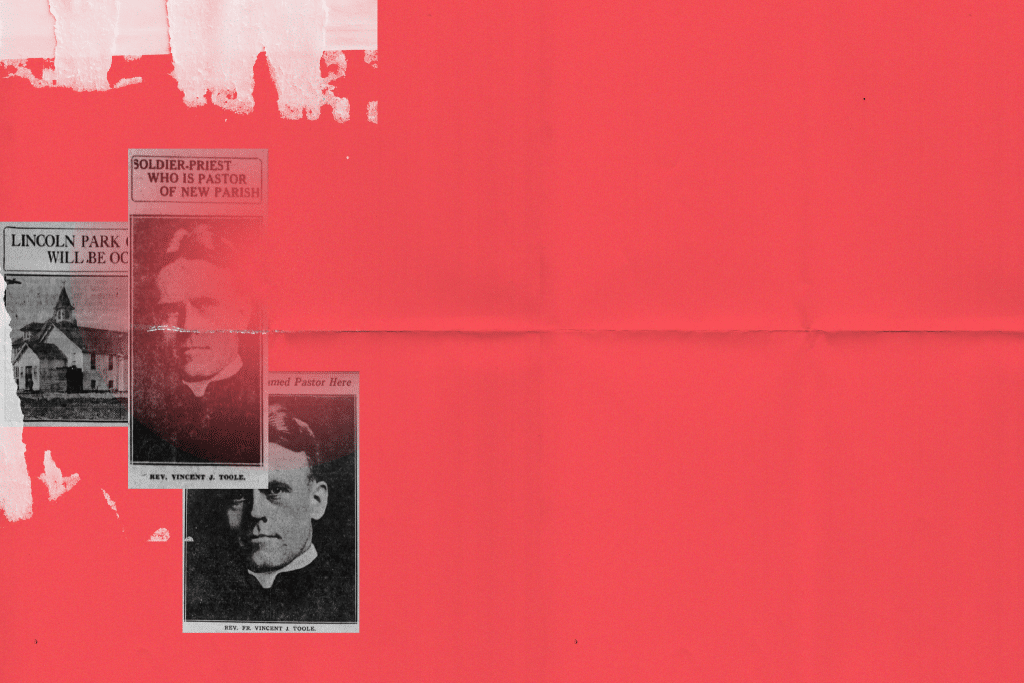 During the final weeks of World War I, an American artillery brigade deep in the Argonne Forest fought for their lives. Out of 55 men and four officers, the 308th ultimately lost 15 men on the French battlefield and the rest were either wounded by gunfire or suffered from the ill effects of chemical warfare. The survivors retreated in what would prove to be one of the deadliest battles in the history of U.S. warfare.

The brigade’s surviving captain desperately desired to see his fallen men given a decent burial though it seemed like an impossible task considering the woods were still under heavy fire.

The situation was brought to the attention of a Catholic chaplain named Vincent J. Toole. His commanding officer noted that the priest “at once volunteered to perform the last rites, absolutely without concern of the dangers involved.”

The chaplain, the captain and a few soldiers were driven by automobile towards the active battlefield and dropped off as close as possible. For two hours, as bullets ripped through the trees and deadly mortars exploded around them, Father Toole diligently took down records, performed the last rites, and supervised the burial of the dead.

It was a heroic deed that would later earn the chaplain a Distinguished Service Cross. Besides the Medal of Honor, it was the second-highest honor a soldier could receive. For any other priest, this military award would be as much national publicity you could expect to have in a lifetime. Yet, believe it or not, this was just one of many incredible feats from the life of Father Vincent Toole, who served much of his post-war career in the Archdiocese of Detroit.

Before his “gallantry in action” in the Argonne Forest in October 1918, Father Toole attracted a national spotlight earlier that year from the trenches. During long periods of downtime in those muddy European ditches, the Catholic chaplain decided to pen a series of letters in defense of the pacifistic Henry Ford. The motorcar mogul from Michigan had stirred up quite a bit of controversy for his criticism of the European conflict. Toole’s letters ultimately were published in the New York World and quickly gained a national audience and Ford as a friend. He commended the carmaker on his “benevolent efforts to bring peace.”

Father Toole, however, made sure to call out Ford for his other controversial views. Ford argued that Jewish bankers were behind World War I and other problems plaguing America. Newspapers reported that the chaplain “took issue with Henry Ford on the Jewish question.” Father Toole told the New York Times, “There is no reason for our dividing into hostile camps, because of race, religion or for any other reason…Mr. Ford is probably the foremost citizen of Michigan. He has done great things for our state. We owe him a great deal. Yet for all that, we do not owe Henry Ford, or any other man, the right of attacking any group because of race or religion.”

Toole would subsequently make note in other interviews of all the positive contributions Jewish people made to the American war effort. His moral disagreement with Ford didn’t completely tarnish the admiration the carmaker had for the chaplain. Newspaper reports indicate Ford attended church functions at Father Toole’s parishes.

By way of his military career, Father Toole also became a friend of former president Theodore Roosevelt. They began a pen pal relationship during the conflict, with Toole keeping him informed of the difficulties faced by the men on the front lines and Roosevelt sharing words of encouragement. Ultimately, they teamed up together for the Third Liberty Loan campaign in New York and New England. Roosevelt, Toole (who was home on leave) and other celebrities went on a barnstorming tour, encouraging the American public to contribute funds to financially support the war effort.

Once the fighting had ended on November 11, 1918, the chaplain and the former president once again unified their powerful voices, arguing that it was the actual soldiers and not the military officers who deserved recognition for winning the war. When the former president suddenly died in his sleep of a blood clot a few months later, Toole asserted to the Detroit Free Press that one of the best ways to commemorate Roosevelt’s life was to support the common soldier and their families. “For the heroic dead, who died that we might triumph,” Toole stated, “many of them had dependents and all of them relatives and friends, for who everything possible should be done.”

Father Toole returned to lead the Catholic congregation of St. Mary’s Parish in Paw Paw, Michigan following the war. He served there for approximately four years before Bishop Michael Gallagher called Father Toole to spearhead the development of St. Henry, a new downriver parish in Lincoln Park, then one of the fastest-growing neighborhoods in the country. Henry Ford was building a massive new factory nearby on the River Rouge and Father Toole’s passion and charisma attracted Catholic factory workers and immigrants in droves to the new parish. He also led a bold fundraising campaign for parish building projects which supported the successful construction of a new church and recreational facilities.

Father Toole also had to confront racist ideologies during his assignment at St. Henry’s. In the 1920s, Lincoln Park possessed a large chapter of the Ku Klux Klan and several of the city’s policemen—including its police chief—openly admitted their membership. In fact, one of these officers had shot and wounded a man in town for throwing rocks at a KKK member distributing racist pamphlets in the Downriver region.

Newspaper reports in 1924 further indicate that tensions were simmering between Catholic immigrants and local KKK members due to a proposed state amendment that would ban parochial education. To demonstrate their support for this bill and their animosity for Catholic schools, robed KKK members burned crosses throughout town and “plastered little red schoolhouse stickers all over” St. Henry’s Church. According to a 1959 essay uncovered by local historian Kathy Warnes, Father Toole did not back down to the intimidating efforts of the KKK. “Armed in his Army uniform and gun he let it be known that he would defend church property in his own way,” asserted the essay. Fortunately, Toole never had to defend St. Henry’s and the amendment was defeated in a landslide vote.

Bishop Gallagher reassigned Father Toole to St. Clement in Dearborn in 1927, another newly developing parish. Once again he quickly became popular with his new parishioners and spearheaded another successful fundraising campaign. The Detroit Free Press reported that the first two Sunday Masses celebrated by Father Toole on St. Clement’s property was in an auditorium designed to seat 800. However, 2,196 people attended these first services, a record Sunday for any new parish in the vicinity of Detroit, the Free Press noted. Father Toole quickly added two more Masses.

Another harrowing incident would garner the passionate priest even more publicity. Prohibition-era crime gripped the greater Detroit area for much of the late 1920s. Unfortunately, on the morning of June 1, 1930, two local officers were brutally gunned down by rum-running gangsters in Grosse Pointe Park.

Claude Lanstra, one of the murdered policemen, was a 24-year-old St. Clair Shores native and a Catholic parishioner at St. Gertrude. Quickly, funeral arrangements were made at the parish and large swaths of the Detroit, Grosse Pointe and St. Clair Shores police departments would be in attendance. Father Vincent Toole was slated to preach.

Father Toole gave a powerful homily, one that directly confronted the prohibition-era crime that concerned so many locals. He emphasized that Lanstra should be commended for his courage and all officers in the pews ought to feel a sense of honor for their service in difficult times. However, the passionate priest primarily spoke about the “real plague” afflicting much of southeastern Michigan.

His sermon was made even more effective since he fervently abstained from alcohol. Father Toole openly admitted “I believe in total abstinence and always I have practiced it…but prohibition is as distant from total abstinence as this world is from the farthest fixed stars in the firmament. It is fanaticism run mad. It is a sinister plague which threatens to ruin our country.”

Father Toole’s passionate preaching against prohibition was seemingly his last moment in the public spotlight. Besides parishioners’ obituaries and local newspapers remembering his courageous military service, the priest essentially disappears from the historical record.

St. Clement’s parish history simply states that Father Toole died in 1951 with no indication of a cause. It is an uninteresting conclusion to the life of perhaps the most interesting parish priest in the history of the United States. A decorated military chaplain, a friend of both Henry Ford and Teddy Roosevelt, protector against the KKK and a teetotaling enemy of prohibition, Father Vincent J. Toole deserves to be remembered not just for his incredible feats. He was a priest of incredible passion for what was good and true, a devoted servant to the evangelizing mission of the Catholic Church in the Detroit area and above all, a pastor who truly loved Christ and the people in the pews.