Archbishop Vigneron discusses the Holy Rosary, its origins, and the special graces that can flow from commitment to this ancient devotion. 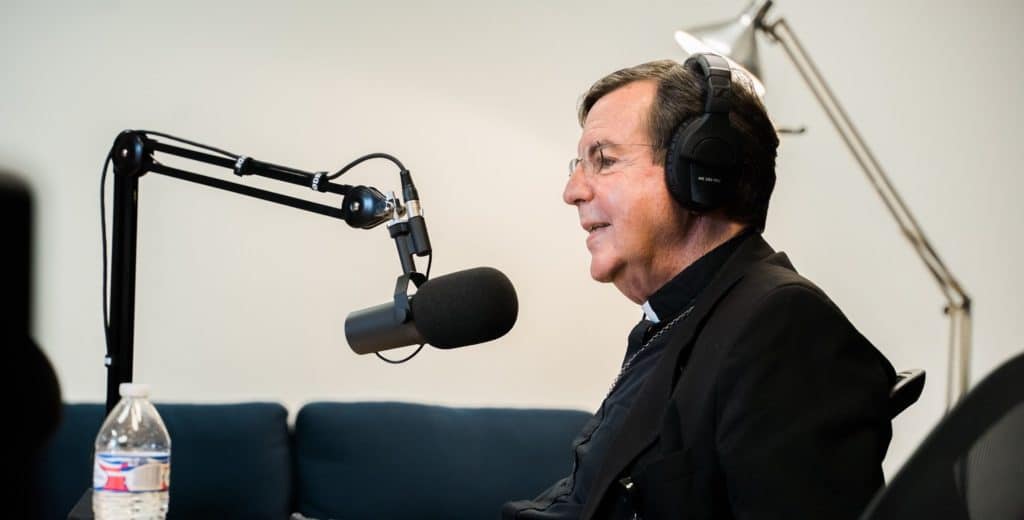 (0:25) Mike, Mary, and Archbishop Vigneron catch up on last month. The Archbishop talks about some of the blessings experienced in the Archdiocese of Detroit as summer has transitioned into fall, including increased enrollment in schools, the September consecration of two new Consecrated Virgins Living in the World, and the ordination of three men as permanent deacons.

(5:25) Mary mentions that Archbishop Vigneron’s birthday is coming up on Oct. 21. He suggests that anyone wishing to pray for him on his birthday could perhaps pray a decade of the Rosary – in honor of October as the Month of the Rosary – and include a special prayer for the eternal repose of the Archbishop’s mom and dad.

(9:28) The Archbishop says it is custom to pray certain Mysteries on certain days, but people are free to meditate on any mystery they feel drawn to on a particular day. On Saturdays, the Archbishop likes to mediate on whatever mystery best fits the time of year, like the Joyful Mysteries at Christmas and the Sorrowful Mysteries during Lent.

(10:38) The Archbishop says counting prayers on beads is a very ancient practice. He says there’s been some debate about the role of St. Dominic in formulating the current format of the Rosary. Whether that’s true or not, the Archbishop acknowledges the important role the Dominicans have had in propagating this form of prayer. The Archbishop mentions that many popes throughout history have promoted the Rosary.

(25:33) The Archbishop talks about the Rosary as a “battle weapon” against spiritual opposition. He uses it in this way, particularly when he is weighed down by negativity and discouragement. He has even found consolation just holding the Rosary. By this gesture, we assert that we belong to the Blessed Virgin Mary, and we are under her protection.

(32:40) The Archbishop says that in Christ there is a new creation, which is epitomized by the humanity of Jesus. This allows what is naturally good to be elevated to a whole new level; we are sanctified through our everyday acts.

(34:10) The Archbishop talks about the Marian apparitions at Fatima and at Lourdes, both of which invited the faithful to pray the Rosary. The co-hosts discuss the power of the Rosary and the graces they have experienced by praying it. The Archbishop urges listeners to pick up the Rosary, even just one decade at a time to build the devotion.

(40:00) Mary and Mike share questions from the faithful with the Archbishop, including the Archbishop’s birthday, languages, and liturgical/calendar seasons. The Archbishop asks for continued prayer for the Archdiocese’s transition to Families of Parishes. They then close with a prayer and blessing.

Links from this episode:

USCCB: How to Pray the Rosary

Napa Institute: Why We Dedicate The Month Of October To The Holy Rosary