A couple shares their experience of choosing life and falling back in love when they were met with an unplanned pregnancy after dating. 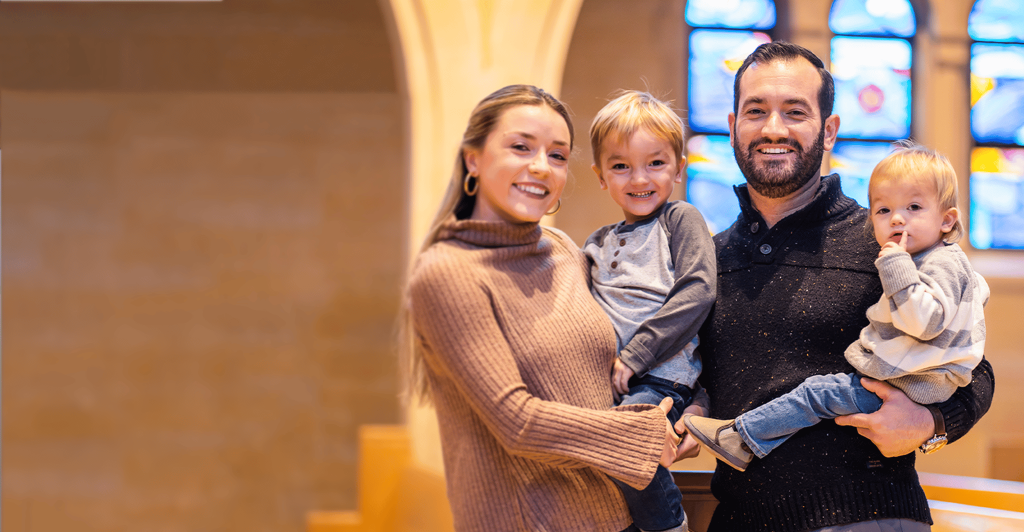 “Do you believe in Jesus?”

This was one of the first questions Alan asked Amy when they met at the crowded Greenwich Time Pub in downtown Detroit among a group of friends in 2018. She answered, “Yeah, I actually do!” Surprised at the question, Amy remembers, “No one had asked me that before.” It wasn’t a typical conversation starter for Alan, either, but their shared belief in Jesus bonded them in that moment. Later on, it became the foundation of their relationship, marriage and family, a continuous source of strength and grace.

Alan was raised in the Catholic faith, attending Catholic schools in south Florida and participating in the sacraments. His commitment to practicing Catholicism ebbed and flowed in his adult life while studying in college and attending law school. After passing the bar in 2015, Alan took a job in Detroit. “I would still go to church but I was more focused on my social life. There were periods of time when I felt guilty since I was not doing what I needed to do. I had also hit a crossroads in my career, not sure what I wanted to do in life. I was in this period of turmoil when I met Amy.”

Growing up in Warren, Amy was baptized Catholic and received her first communion but her family disconnected from the Church when she was still young. Later on, her mother got involved with a nondenominational church and Amy would join her occasionally. Amy attended massage therapy school after high school, a dream since childhood, and thrived on traveling the world. “I was someone who always said, I’m going to travel, I’m going to be the fun aunt, I don’t want kids. I just really enjoyed traveling to the fullest. I went to eleven different countries within a year and a half.”

Connecting over Catholicism and spirituality

Amy felt compelled to rediscover spirituality in the summer of 2018 through the solitary experience of training for a triathlon and a secluded trip to South Africa with her parents. “I had a lot of time to think and process by myself. I just felt more spiritual. So I started going to church with my mom more meaningfully and also joined my two friends from high school who went to the nondenominational youth group called 18/29 at Kensington Church.”

When they met that night in Detroit, neither Alan nor Amy were considering commitment or settling down — let alone starting a family.

Days after meeting at Greenwich Time Pub, Alan and Amy started dating. They traveled to France together, ran a half marathon together, tried new restaurants and bars together and attended 18/29 and Young Catholic Professionals gatherings together. Amy describes, “We were sort of living a double life at the time. We were believing in Jesus and Catholicism but going out and drinking. We were in a relationship but we were just kind of hanging out.”

Their relationship wasn’t very serious, but Amy was blindsided when Alan broke up with her after four months of dating in January of 2019. “Everything was fine and dandy. And a week after New Year’s in 2019, he breaks up with me.” The breakup followed the pattern of Alan’s recent dating life — he would briefly date a girl and then break up with her since he didn’t know what he wanted in life. Right after their breakup, Alan decided to recommit to his faith, going to confession and renewing his prayer life.

About three weeks later, Amy started to experience flu-like symptoms. She became so sick that she had to call off work. After the medication she was prescribed didn’t help, she went back to the doctor for an X-ray. The doctor insisted that she take a pregnancy test before proceeding with the X-ray. Begrudgingly, Amy agreed.

It came back positive.

Amy was shocked and dismayed. How could this be? Her mind racing, she called Alan immediately. He ignored her call at first, so she texted him, “You have to pick up your phone.” When he did, she shared the news. “I’m at the doctor’s office and I’m pregnant.” He responded, “What do you mean?” Amy replied, “I’m pregnant. I don’t know what to do, I’m just letting you know.” She remembers, “I didn’t know who else to tell. This was the last thing on my mind.” At that point, she was between eight and ten weeks along in her pregnancy.

Looking back, the couple sees God’s plan at work that day. Alan said, “Literally ten minutes before she called me, I was on my knees for the first time in a while saying the rosary. I was still feeling lost and I needed to ask for some guidance. When I received the call from Amy, I was like, ‘God, is this a joke? This is where you’re directing me?’”

They agreed to meet up at his apartment later that week. Processing the news of the pregnancy together, their emotions were high. Amy was 22 and Alan was 29, neither felt ready to become parents. Amy said to Alan, “I’m not going to have this kid if you’re not going to be around. We don’t have to get married. But if I’m doing this, then we’re doing this.”

Amy spoke with her older brother who also experienced an unplanned pregnancy at the age of eighteen with his girlfriend and decided to keep the baby, now Amy’s nephew. He helped calm her, saying, “I get it. It’s tough. You might feel awkward now, but once the baby is born everybody is going to be joyous about it and nobody is going to judge you.”

Throughout the pregnancy, Amy and Alan continued to support each other in faith without the pressure of dating. Amy was very sick throughout her pregnancy, often needing to skip work. She and Alan fought and argued but never strayed from their commitment to each other and their child. Their son Asher was born six weeks early on July 31, 2019.

“During those months of pregnancy there was a lot of stress, anxiety and tension, but there were moments of grace when we prayed together. By the time our son was born, I had a whole different viewpoint on everything,” Alan said. About six months after Asher’s birth, they rekindled their romantic relationship. Amy explained, “From the second we met, our whole relationship always revolved around Jesus and God. This was clearly meant to be in some weird way.”

With their different faith backgrounds, they were able to learn from each other — Alan was able to share Catholic history and traditions with Amy and through her strong spirituality, she challenged Alan to develop a personal relationship with God. Their son was baptized at St. Mary Parish in Royal Oak and Amy began to embrace Catholicism more and more. Alan said, “It was cool to see Amy discover something she’d never known before like the saints and devotions. Her curiosity blooming was also getting me excited.”

Alan proposed to Amy in June of 2020 when Asher was about to turn one. “It was an immediate yes,” Amy said, and they had an intimate pandemic wedding in January of 2021.

As part of their marriage preparation, they met with Father Paul Snyder at St. Mary Parish where Asher was baptized. Amy and Alan felt accepted and welcomed by Fr. Paul and the parish community. “Fr. Paul knew that we baptized Asher and then were getting married, but he was just getting to know us as a couple. His response to our story was, ‘That’s really, really great.’ I didn’t ever feel judged,” said Amy.

A quote that they find especially meaningful to their story is, “This life is not about you,” which they heard through a homily by Bishop Barron. Both Amy and Alan had different visions for their lives before the pregnancy, but Alan shared, “This is the vocation God was calling me to. I thought it was always going to be career-based. Now I realize there are more important things and I’m more at peace with my job than I had ever been.” Amy recalls that she didn’t have a specific plan and would tell her 22-year-old self, “Trust in God’s plan. You don’t have one.”

Although they viewed the pregnancy as a burden at first, they now see the error in that way of thinking. Alan explained, “Thinking that you can’t reach the same fulfillment or even more because there’s a baby coming is a comical argument for me now. You don’t know the fulfillment I get just looking at my two kids.” Amy claims she never wanted children before becoming pregnant, but now she said, “I want all the children!” After Asher, they knew they wanted another child and their second son Ambrose was born in September 2021.

Amy was confirmed in June of 2022 and is very involved at St. Mary Parish, specifically the two groups she co-leads with other parishioners — the Mom & Tots group that holds play dates at the church and the Young Married Couples group that gathers monthly. She is also hoping to bring Walking with Moms in Need to the parish to help other moms in difficult circumstances in the surrounding areas. “We can’t be pro-life and not support these women. If I didn’t have the financial support of Alan and his family and the mental and emotional support of both our families, I don’t think I would have done this. I wouldn’t have been able to work or pay my rent because I was so sick during my pregnancy. I want all women to have this amount of support so that abortion wouldn’t be an option to consider.”

Their story of choosing life is rooted in faith and Catholicism, but Amy recognizes the importance of education in creating a pro-life culture. She found power in learning the facts about abortion. “I think that faith is a very compelling emotional tug. But if I’m debating abortion, I try to shy away from it. That is our story and I’m proud to tell it, but I also wish that people would research it like I did. Once you find out all the information, to me it makes more sense. There is no argument for the other side when you research what’s not being seen.”

Their journey to marriage and parenthood was not easy or straightforward, but it was full of God’s grace and providence. Amy shared a favorite quote by C.S. Lewis that wraps up their story: “Children are not a distraction from more important work, they are the most important work.”