Meet the American saint whose faith, courage, obedience, and maternal tenderness have left a fruitful heritage worth preserving. 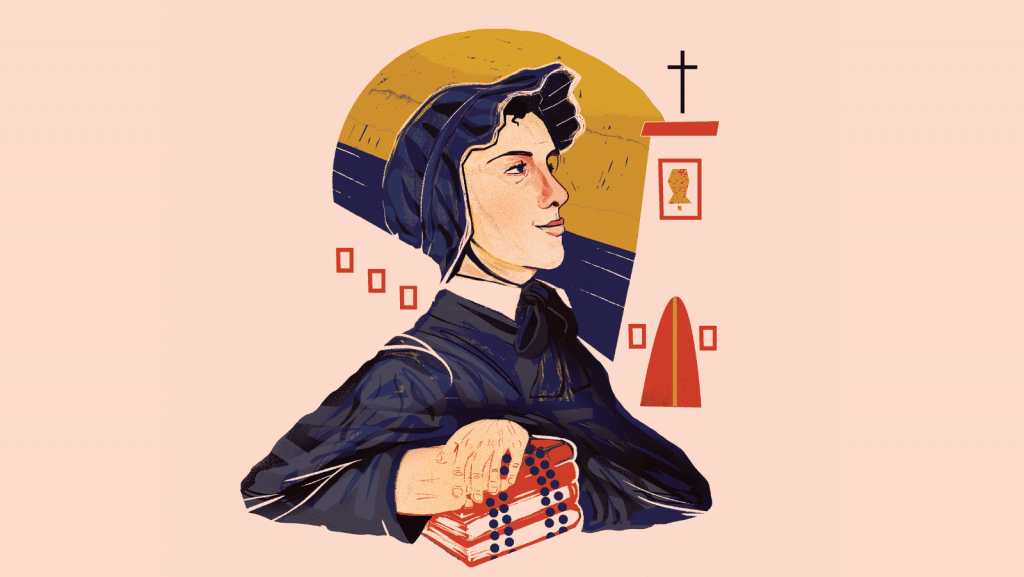 Father Boniface Hicks, OSB has been a monk at St. Vincent Archabbey since 1998 and currently serves as director of spiritual formation and the director of the Institute for Ministry Formation at St. Vincent Seminary in Latrobe, Pennsylvania. Together with Father Thomas Acklin, OSB, he is the co-author of Spiritual Direction: A Guide for Sharing the Father’s Love and Personal Prayer: A Guide for Receiving the Father’s Love, both published by Emmaus Road Publications.

“Beautiful indeed and of great importance is the vocation of all those who aid parents in fulfilling their duties and who, as representatives of the human community, undertake the task of education in schools.” (Gravissimum Educationis no. 5)  Because teachers are expected to be an extension of mothers and fathers for the education of children, they are involved not only in communicating facts or teaching skills but also in forming children in culture and values. The culture of the school should thus be in harmony with the culture of the home, promoting interpersonal relationships “between pupils of different talents and backgrounds [a school] promotes friendly relations and fosters a spirit of mutual understanding…”.

Few have embodied the maternal role of a school teacher quite like the first U.S.-born saint, Elizabeth Ann Seton. We see the same points that the council made shine through in an Aug. 3, 1810, letter to her friend Eliza Sadler: “[Y]ou know I am as a Mother encompassed by many children of different dispositions — not all equally amiable or congenial, but bound to love, instruct and provide for the happiness of all — to give the example of cheerfulness, peace, resignation — and consider individuals as proceeding from the same Origin and tending to the same end than in the different shades of merit or demerit.”

St. Elizabeth Ann Seton’s passion for teaching initially began as a means of financially supporting her family after the death of her husband. At the young age of only 29, with five children, she opened an academy for young ladies. Soon after, she converted to the Catholic faith, a decision that left her deserted by most of her family and friends and inspired parents to withdraw their daughters from her school. In her writings she reflects, “The black clouds I foresee may pass by harmless, or if in Providence of grace they fall on me, Providence has an immense umbrella to hinder or break the force of the storm.” What a comfort. But it was in these years of anxiety, where the livelihood of so many lay on her shoulders, that she kept her eyes steadfastly on heaven, her ultimate end, as evidenced in one of her most beloved prayers:

Lord Jesus, Who was born for us in a stable, lived for us a life of pain and sorrow, and died for us upon a cross; say for us in the hour of death, “Father, forgive,” and to Your Mother, “Behold your child.” Say to us, “This day you shall be with Me in paradise.” Dear Savior, leave us not, forsake us not. We thirst for You, Fountain of Living Water. Our days pass quickly along, soon all will be consummated for us. To Your hands we commend our spirits, now and forever. Amen.

A mother to many

After losing most of her family and friends due to her conversion, she left New York and went to Baltimore, where she was asked by the archbishop to establish a school and found a religious order. She was a quintessential mother and quickly embraced the call to mother children in the school, including her own, and also to found a new family of spiritual daughters, also including her own biological daughters. She had a heart to mother all the poor children of the world. After establishing the Sisters of Charity, a new religious order that spread broadly, and raising a great many children through her schools, Mother Seton died at only 46 years old. She was canonized by Pope St. Paul VI in 1975 as the first canonized saint born in the United States.

St. Elizabeth Ann Seton demonstrated an essential element of Catholic education in the way she approached schooling as a mother. As Vatican II taught, the school should be an extension of the parents’ role in raising children. Mother Seton cared for her diverse classes of children in a maternal way, forming their intellects but also nourishing their hearts with her tender, motherly care. “The girls knew that she loved them, and they loved her in return: not only for her charm, her playfulness, her smile, her solicitude, but because of what shone from her eyes and lighted all her face. It was this that sent them running to her, that made them desperate for her approbation. … It was the maternal tenderness within her that made them always remember her best with arms flung wide to embrace.” (Joseph Dirvin, Mrs. Seton, Foundress of the American Sisters of Charity, New York: Basilica of the National Shrine, 1993, 327)

Round the clock Catholic teaching

In a time when public schools were thoroughly Protestant, Mother Seton’s schools were decidedly Catholic. She taught the children prayer and Catholic culture, taking them to Mass, preparing them for sacraments, introducing them to saints and forming them in their Catholic faith. They began every day at 6:30 a.m. with their morning prayers, followed by Mass and then, after a morning of instruction, they prayed the rosary at 11:30 a.m. There was another period of adoration before afternoon instruction began at 3 p.m., and the end of the day included spiritual reading for the older children at 7:15 p.m. Mother Seton also gave the children spiritual conferences twice per week. Everything was imbued with Catholicism, including the punishments and rewards: “time out” required sitting in front of a picture of the Redeemer, while rewards included holy pictures and holy medals.

St. Elizabeth Ann Seton was singularly holy, but her approach to education from a spirit of motherhood was imitable and able to be passed on to her religious daughters in the Sisters of  Charity and subsequent generations of teachers in schools. Her little school in Emmitsburg was the beginning of the great movement of parochial schools in the United States, and the Catholic faith that children received in those schools formed generations of holy Catholics.

We continue to learn from Mother Seton’s goodness and zeal. We can take Pope St. Paul VI’s words to heart from his homily during the Mass for the Canonization of Mother Seton: “Rejoice, we say to the great nation of the United States of America. Rejoice for your glorious daughter. Be proud of her. And know how to preserve her fruitful heritage.” (Pope St. Paul VI, Canonization homily for Elizabeth Ann Seton).

Reflections from Mark Hart on Living as a Joyful Missionary Disciple

At the heart of the Church