Father Boniface Hicks, OSB, calls us to follow the path of St. Frances Cabrini, whose devotion to the Sacred Heart serves as a model for grace and humility, as we seek to spread Christ’s love through service 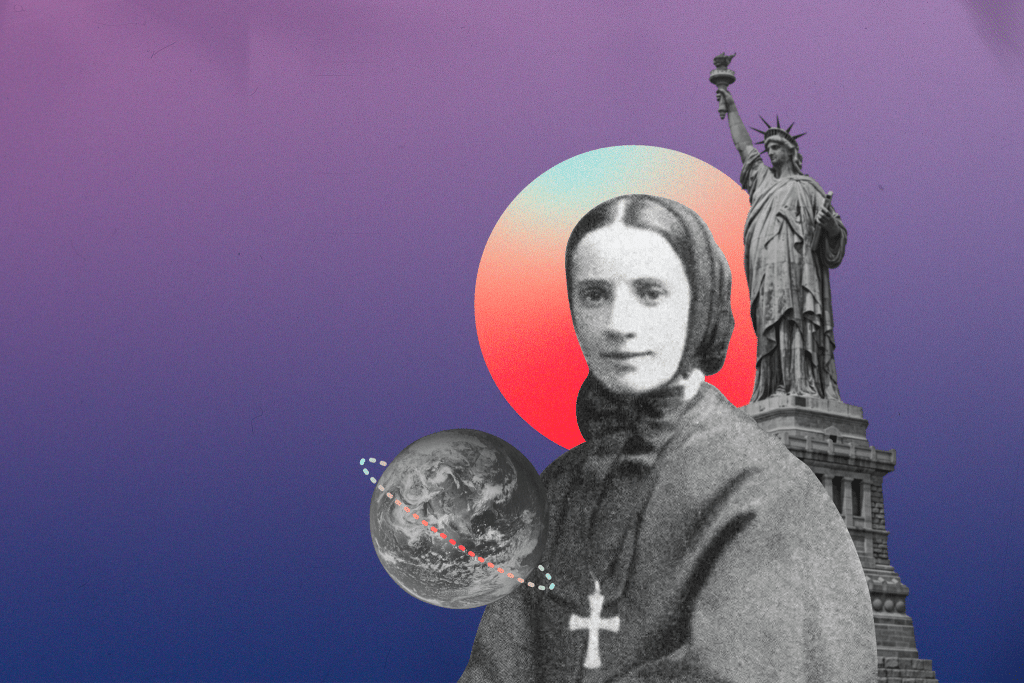 “Not to the East, but to the West” were the famous words spoken by Pope Leo XIII to the holy, zealous woman who sought the pope’s blessing to spread the Gospel in China. With trust in his authority as Successor of Peter, she set out for America instead. This holy, zealous woman, now known as St. Frances Xavier Cabrini, founded the Missionary Sisters of the Sacred Heart of Jesus, who dedicate themselves to caring for immigrants. After canonizing Mother Cabrini in 1946, Pope Pius XII declared her patroness of immigrants in 1950. What did she do to deserve such a title, especially in that time after World War II when immigration was such a significant issue?

She was not a political activist, but, similar to Mother St. Teresa of Calcutta, she focused her attention on the human person. She loved immigrants and, following the example of her Lord, she served them by becoming one of them. She emigrated from her beloved Italy and took up citizenship in the United States. She personally traveled broadly throughout the United States and founded convents, hospitals, schools, and orphanages in major cities across the country. She took 23 transatlantic voyages to remain connected to the Church in Rome and to establish hospitals, schools, and orphanages in Europe and Latin America as well.

As Pope St. John Paul II wrote in a message to her sisters on the 150th anniversary of her birth: “Armed with remarkable boldness, she started schools, hospitals, and orphanages from nothing for the masses of the poor who ventured into the new world in search of work. Not knowing the language and lacking the wherewithal to find a respectable place in American society, they were often victims of the unscrupulous. Her motherly heart, which gave her no peace, reached out to them everywhere: in hovels, prisons, and mines.” These poor immigrants who lived in very difficult conditions found in Mother Cabrini and her sisters an experience of God’s tenderness.

Mother Cabrini arranged services to provide for their needs, to help them learn the language and culture, to apply for citizenship, to find jobs and to keep jobs, but, just as importantly, she gave them dignity in her gaze of love and closeness to them. As Pope Francis reminded her sisters on the first centenary of her death: “[Migrants] also always need, first and foremost, love, friendship, and human closeness; they need to be heard, to have people look into their eyes, to be accompanied; they need God, whom they encounter in the gratuitous love of a woman who, with her consecrated heart, is your sister and mother.”

We find in Mother Cabrini an example of evangelical charity. This was a woman who lived Gospel love for the most destitute, abandoned, and forgotten. Where did she get the fire for that love? She had two secrets. She found fiery love above all in the Sacred Heart of Jesus to whom she dedicated her order and whom she encountered in the Blessed Sacrament. Furthermore, she received his Love so well because she came to him in humility.

We have had the Blessed Sacrament here for the past eight days. The joy we expressed on the first day we had Jesus with us was simply great. Oh, how Jesus makes himself felt in our midst! How he repays us for the hardships we endured during the early days! Now we have difficulties to surmount but the Sacred Heart tells us that he can do all things to show us that we can do nothing worthwhile by ourselves but that it is he alone who does everything for us and will even work miracles if necessary.

Any effort to love like Christ will face obstacles from every direction, even from the Church herself at times. The Sacred Heart of Jesus, whom we meet in the Blessed Sacrament, gives us the strength and spiritual consolation we need to discern, choose a path, and persevere.

Mother Cabrini also cherished humility. She wrote to her sisters in a letter dated May 23, 1890:

Other candidates presented themselves to me but they were capable only, not humble. One candidate went so far as to say that she was doing us a favor by entering our Institute because we had need of someone who spoke English. I dismissed her, saying that the Sacred Heart does not need anyone but that the one who wishes to enter the Institute has need of the Sacred Heart; it is he who grants us the grace of admitting us among his missionaries.

St. Frances Xavier Cabrini not only acted on her convictions and dismissed the candidate, but she also modeled humility in checking her convictions against the judgment of her sisters by asking: “Do you think I did well in saying this? I would like to have your opinion.” Then she concluded the letter with a simple summary of the power of humility: “a humble subject can work for fifty or more.”

One reason she gave for that is that, “without humility peace is lacking and grace departs.” We disperse our energies and waste them when we are too caught up in ourselves. When we are humble, we tend to forget ourselves, focus on the Sacred Heart, and carry out his will. Perhaps this explains the slowness of political processes where personalities and agendas can so easily frustrate the true work desired by the Sacred Heart of Jesus. The result of her devotion to the Sacred Heart, to the Blessed Sacrament, and humility was that she did tremendous work for migrants. Before she died of complications from malaria at age 67 on Dec. 22, 1917, she established 67 missionary institutions to serve the sick and poor in seven states, from New York to California, as well as in multiple countries in Latin America and Europe. Her evangelical charity was manifested in self-sacrificial service even until her last breath — she died while preparing Christmas candy for local children. Let us follow her example of devotion to the Sacred Heart and the Blessed Sacrament, remaining humble and seeking ways to serve the poor, and may the Lord make our efforts fruitful for the spread of his kingdom.