Healings still happen, body and spirit, at the Sanctuary of Our Lady of Lourdes 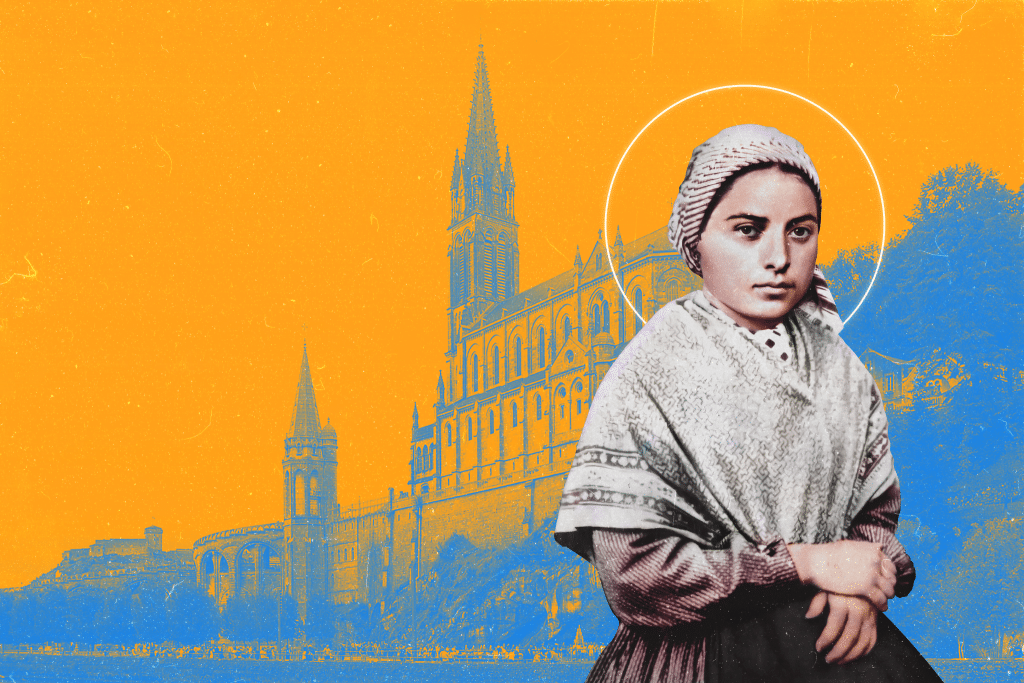 Three hundred people gathered around a young girl kneeling in the dirt along a forlorn stretch of the River Gave. She knelt before a cave, or grotto, in a rocky cliff near the river. She raised her eyes toward a hollow above the cave and silently moved her lips. The villagers of Lourdes, a mountain community in southern France, pastured their pigs here. Could the Blessed Mother really be appearing in this reeking place? And to Bernadette Soubirous, an illiterate 14-year-old living in an abandoned jail cell with her impoverished family? The crowd came to the grotto of Massabielle to find out, maybe to glimpse the Mother of God themselves. Instead of a miracle from heaven, they saw the actions of a simpleton, a fraud, perhaps even a lunatic — at least at first.

“Drink from the spring and wash yourself there,” requested “the lady in white,” as Bernadette described her. It was February 25, 1858, the lady’s ninth appearance to Bernadette since February 11. Bernadette hesitated. The lady pointed to a patch of mud in the back of the grotto.

A confused Bernadette still obeyed. She scraped her fingers into the muddy hole and brought her cupped hands to her lips. Then Bernadette turned to the crowd, her face smeared with muck.

“A filthy little upstart,” said another.

Bernadette’s quiet explanation: “She said do this for sinners.”

That evening, a man had the muddy water brought to his home. He poured it over his ruined eye. Instantly the eye could see — Lourdes’ first miracle. Three days later, this mud hole of shame gushed clear mountain water. A desperate woman plunged her crippled hand into the spring. The hand emerged healed — Lourdes’ first miracle at the grotto.

Water continues to pour from the spring, an astounding 12,000 gallons per hour. Pilgrims continue to come to Lourdes, for healing, spiritual refreshment, or just for curiosity— an astonishing 6 million per year. As for the healings? The shrine’s medical bureau has documented more than 7,000. The Church has endorsed 70 healings as miracles of God. A nun’s instantaneous cure of nerve disease received the most recent approval in 2018.

The beauty of its setting in the Pyrenees Mountains is the backdrop to the human drama of this sacred space, where heaven’s Queen has revealed her most highly favored name, “I am the Immaculate Conception.” It’s no miracle the Sanctuary of Our Lady of Lourdes is the second most visited Marian Shrine in the world.

First-time pilgrims often are surprised at the sanctuary’s vastness. Crossing the St. Michael Bridge from Old Town, visitors encounter the dramatic Esplanade. In this grassy park with its elliptical walkway, thousands of worshippers participate each day in two legendary Lourdes traditions.

An afternoon eucharistic procession circles the Esplanade. With monstrance raised high, the presiding priest blesses the afflicted in wheelchairs along the way. In the evening, pilgrims carry candles and pray the rosary in a crescendo of languages at a torchlight procession.

As pilgrims proceed along the Esplanade, they pass by the Statue of the Crowned Virgin before reaching iconic structures filled with stunning mosaics and precious artifacts: the original Crypt chapel (1866), the Rosary Basilica (1889), and the Upper Basilica with its landmark spire (1871).

Of course, visiting the Grotto of Apparitions is the highlight of a Lourdes pilgrimage. Swing right at the Rosary Basilica and down a shaded path, there it is!

In silent unity, pilgrims line up and enter the grotto, touch its black rock face, peer into the miracle spring. They find the marker where Bernadette experienced the first of her 18 visions. They gaze up at the image of the Immaculate Conception in the grotto niche in awe.

At multiple fountains, pilgrims “drink and wash” with water piped from the grotto well. Some wash more literally at 17 private bath receptacles. They ask for healing while plunging backward into the frigid water with the help of trained assistants. Many visitors continue their pilgrimage by crossing a ramp over the River Gave to light a candle, leaving it as a prayer petition in the Chapel of Light. 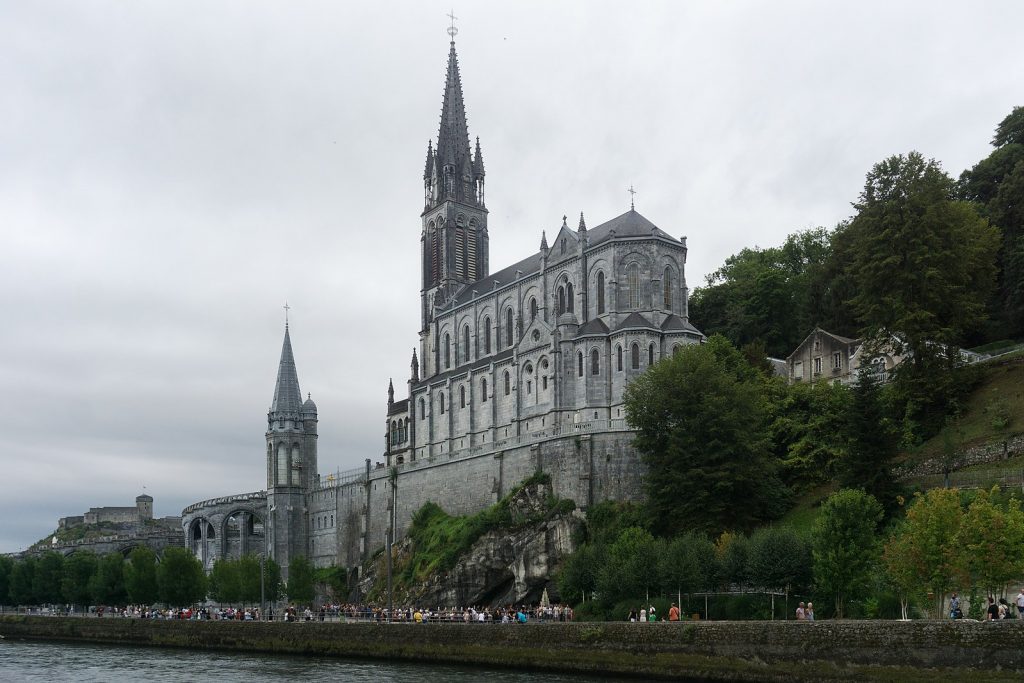 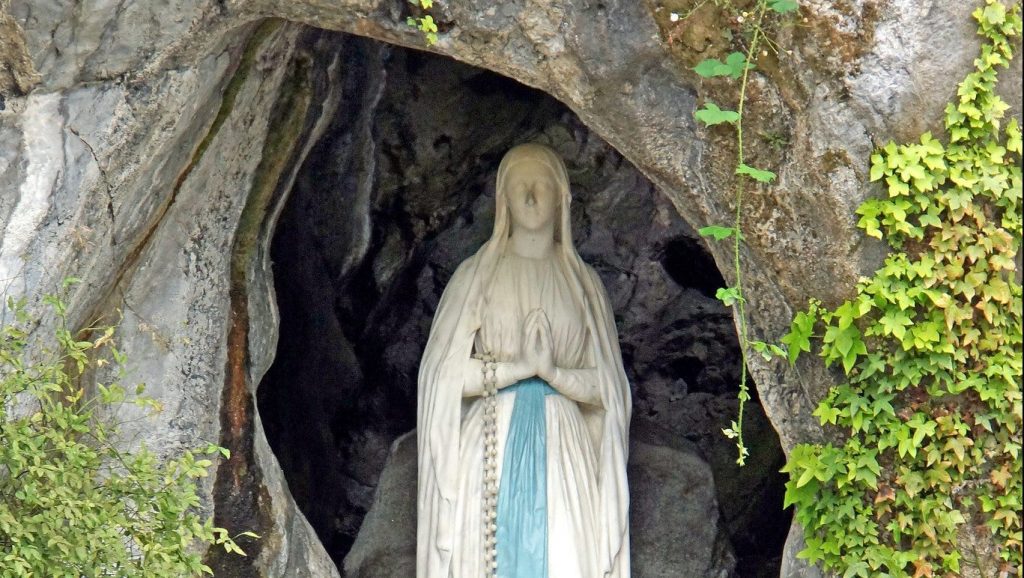 Proud to be Catholic

Laurie Hojak made a journey to Lourdes and Fatima in September, arranged by Northville’s Pilgrimages by Corporate Travel.  “I thought I needed to go on a pilgrimage where Mary appeared,” Laurie explains, “to pray for strength for my family in these hard times.”

Each day at the grotto, the rosary is prayed in different languages, which gave Laurie a heartfelt sense of the church’s universality. “Praying with like-minded people from all over the world — it made me even prouder to be Catholic.” She felt privileged during Mass to sit at the spot where Bernadette first saw Mary. “Of course, I had my husband Bruce take a photo!” she laughs.

Like Laurie, James Forbes of Bay City had his faith reinforced by the pilgrimage. “At Lourdes, seeing how God is at work in the world, gave me a stronger feeling of being grounded and centered in my Catholic beliefs,” he says. The retired elementary school teacher says he did not ask for a miracle. “Only for the maintenance of my own soul. I wanted to let the Blessed Mother know I appreciate all she has done for me.”

Laurie believes physical healings do happen, “but first we have to ask for the spiritual.” She and her daughter have a touching ritual using Lourdes water from the fountains. Laurie pours the water over her daughter’s hands, suggesting Bernadette at the well, and encourages her to “ask the Blessed Mother for help” when a difficult life issue arises.

I also have a small Lourdes story to share. In 2000, two friends, Mike and John, invited me to join them on a whirlwind tour of holy sites in France and Belgium. Lourdes was the most anticipated stop. John had been suffering chronic pain in his right arm since a car accident as a teen. As he dropped into the chilly water at the grotto bathhouse, John asked the Virgin to heal his arm. John’s pain still remains. But the moment he rose from the water, the migraine headaches that had plagued him since the accident disappeared.

“I don’t know if it’s a miracle or not,” John says with humility. “I just know I haven’t had a migraine since that day.”

A pilgrim could spend days exploring the 29 worship areas within the sanctuary. A “Footsteps of Bernadette” walking tour through Old Town is intriguing: to Le Cachot, the jail cell where Bernadette lived, Boly Mill, Bernadette’s birthplace, and to the Shepherds Hut in Bartres, where she tended sheep.

“You hike up lots of hills!” Laurie laughs. “But you really see how Mary must have loved Bernadette’s humbleness.”

“The cell was so little,” she continues, “and we have so much.”

And what became of Bernadette? In 1866, she left Lourdes forever to become a Sisters of Charity nun. She died at the community’s motherhouse in Nevers in 1879, at age 35, from agonizing long-term diseases. Make a side pilgrimage to Nevers if you can. The body of St. Bernadette lies in state at the convent — totally preserved from corruption to this day.

Can’t make a pilgrimage? Take a virtual visit at lourdes-france.org. Walk the grounds through a 360-degree virtual tour. Learn about Mary’s visitations through videos and vintage photos.
Submit a prayer petition or have a candle lit. View events in real-time with TV Lourdes.

A Grotto for Detroit

On March 15, 2020, at the height of the pandemic, Archbishop Vigneron entrusted the Archdiocese of Detroit to the care of Our Lady of Lourdes so that, through her intercession, the people of Southeast Michigan would be under her perpetual care. In gratitude, Archbishop Vigneron announced the creation of a grotto to Our Lady on the campus of the Blessed Sacrament Cathedral. For more information and ways you can support this project, go to: catholicfoundationmichigan.org or call Jim Thomas, the Archdiocese of Detroit Director of Development Mission Support, at 313.596.7450.