Learn how a fated encounter on a plane led Mother Teresa to bring her missionaries to Detroit where their work continues in the city to this day. 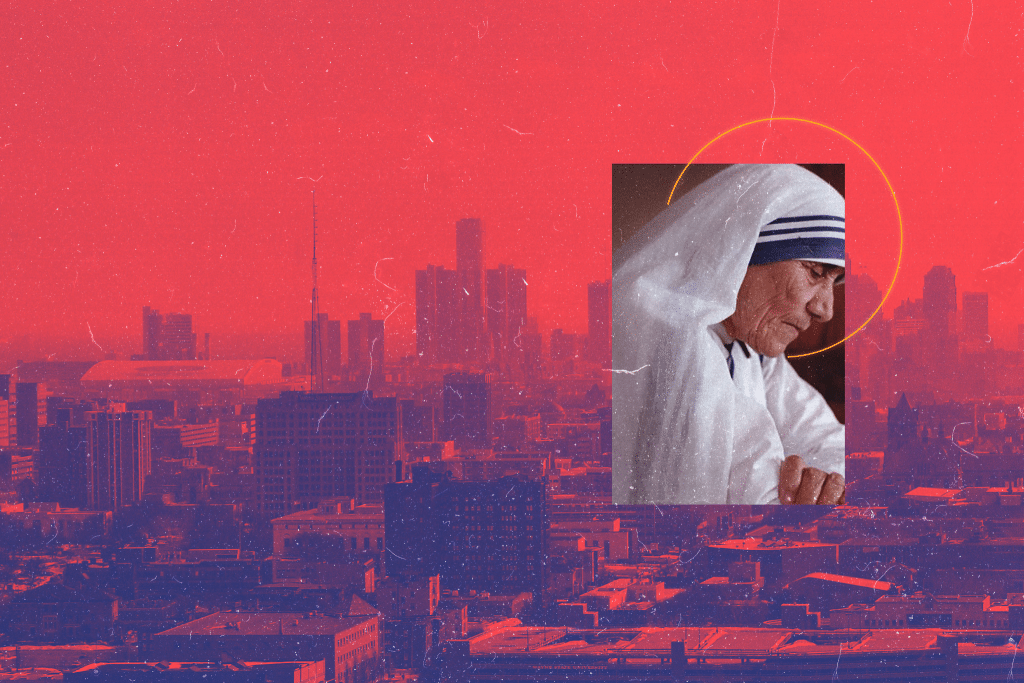 In 1972, Father Edward Farrell boarded a plane at Chicago’s O’Hare Airport to head back home to Detroit. The routine flight turned out to be anything but ordinary.

In an interview several years later with the Detroit Free Press, Father Farrell recalled that memorable trip. “I looked at the person in the seat next to me and there she was. I’d heard of her, of course, and greatly admired the work she does among the poor in Calcutta,” shared Father Farrel.

His seatmate was none other than Mother Teresa of Calcutta, a future Nobel Peace Prize recipient and a saint in the making.

During a subsequent phone call, Father Farrel worked up the courage to ask Mother Teresa if she would ever consider opening a Missionaries of Charity convent in the Detroit neighborhoods. She simply responded, “Nothing is impossible.”

Soon enough, Father Farrel received a promising message from Mother Teresa. She was not only coming to Detroit for a visit, but she was bringing three sisters from her order to minister permanently on the streets
of Detroit.

On the evening of June 22, 1979, Mother Teresa and her trio of fellow Missionaries of Charity arrived at Detroit Metro Airport. A large crowd of priests and clergy waited to greet them, including the overjoyed Father Farrell.

They were then escorted to St. Agnes, which was led at that time by Father Farrell. There, Mother Teresa detailed the mission of Sisters Fidelia, John Janet and Nalina to a crowd of 150 people. The trio was to “search for the poor, the lonely, the unwanted and rejected and bring them home to the heart of Jesus.” Mother Teresa added that these nuns “are my gift to Detroit. Take them to help you search in your city for the poorest of the poor.”

An apartment down the street from St. Agnes would serve as the sisters’ home base from which they would serve the surrounding neighborhoods. Parishioners had donated beds and appliances, but when Mother Teresa gave their “convent” a look over, she instructed them to remove the refrigerator. Modern conveniences would apparently distract them from their mission of serving the poor.

Msgr. Patrick Halfpenny, then a chaplain at Bishop Borgess High School and at that time a member of the archdiocese’s Communications Office, was able to help arrange Mother’s appearance on a local midday radio program before her departure. Monsignor recalls, on the elevator ride up to the studio, Mother Teresa encountered a young woman and asked for her name. To her delight, her name was Teresa. Mother responded, “I am Teresa, too, only the little one.”

Once they had arrived at the studio, Msgr. Halfpenny remembers how Mother Teresa’s feet did not reach the floor when she sat for her interview. She insisted on not discussing politics while the host smilingly asked that Mother not mention abortion. About three minutes into the interview, Mother spoke about the importance of defending the unborn. The interviewer bumped his coffee cup, which clattered noisily. He then smiled and said, “Let the record show that was not a bolt of lightning.” When the interview had concluded, and as they were leaving, the veteran host pulled the monsignor aside saying to him off-air, “If she needs something, please let me know.”

A Free Press report in 1980 revealed the diversity of work the sisters were doing along the “infamous Cass Corridor.” They could be witnessed going in and out of apartments, responding to the unique needs of individuals living in that area. One man who could not leave his second-story flat due to health reasons called the nuns “his girls.” Like clockwork, he could count on the sisters to visit with him and even assist him with picking up groceries.

Father Farrell further detailed the other kinds of services the trio was performing in Detroit. “They bring the quiet but absolutely necessary human joys to very lonely and forgotten people. They bathe invalids, shop for them, sing songs with them and relate to them as human beings.”

The priest also noted that the Missionaries of Charity gained the admiration of an unlikely ally. During one day of ministry, two of the sisters were approached by a gang member on Linwood who in turn encouraged them to meet their leader. In this unique meeting, the gang leader assured the so-called “ladies in the sheets” that they would be protected wherever they served in Detroit.

Mother Teresa returned to Detroit for a brief visit in the summer of 1981. After some observations of the sister’s work in the neighborhood, she bluntly stated that her sisters were not forming close enough relationships with the people they served. Mother Teresa made the executive decision to place two of the sisters in a new residence in the neighborhood where they visited most and “among the people to bring Jesus right there.”

During this second visit, a special Mass was held at St. Agnes with both Rosa Parks and Mother in attendance. One thousand people packed the pews to get a glimpse of the future saint. At the end of Mass, she emphasized two seemingly disconnected issues. First, she made note of the fact that abortion was “killing the image of God.” Mother Teresa also pointed out that serving the poor was “the sure way to go home to God.” Her remarks that day revealed that her pro-life ethic truly knew no bounds. Every single human person, from the womb to the tomb and regardless of economic status, was worthy of respect and dignity according to the future saint. Msgr. Halfpenny noted, “Every human being was valuable to her.”

Msgr. Halfpenny also had the privilege to interview Mother on behalf of the archdiocese’s Communication Office before her departure. Mother Teresa’s personality made a lasting impression on Msgr. Halfpenny. Beyond the “easy humor” she demonstrated in that brief elevator encounter, the monsignor noted that “she radiated joy” and “emanated genuine peace” wherever she went. “She had an unshakeable conviction about the right way to treat every person.”

In the years and decades following Mother Teresa’s final visit to Detroit, the Free Press routinely covered the work of the Missionaries of Charity. They could be seen working in local soup kitchens, visiting housing projects and neighborhoods “even police would not enter,” and using their small living quarters as an emergency shelter.

Today, the Missionaries of Charity continue their tireless ministry in the heart of Detroit’s Mexicantown where they have served since 1984. Five Sisters — Christa, Brunetta, Anima Christi, Trima Maria and Imeldina — devote much of their time helping out at St. Gabriel Parish on the city’s west side.

Father Kevin Roelant, the pastor at St. Gabriel, certainly appreciates their service to the Church community. Father Roelant noted that they help teach the catechism, lead a weekly prayer group for young families to pray the rosary before the Blessed Sacrament and even host faith camps for local youth during the summer.

Their ministry often extends well beyond the parish grounds with the sisters making frequent home visits throughout Mexicantown. Beyond praying with families and teaching the faith, sometimes they sit with lonely Detroiters for a friendly conversation and even do housework. “Anything they want us to do, we do it,” Sister Imeldina plainly stated in a phone interview.

She also made note of other types of charitable work they do in the community. The Missionaries of Charity organize a monthly kitchen pantry in their convent for the poor in the community. They make visits to area nursing homes where they visit with the elderly. Sister Imeldina especially cherishes feeding and helping the area homeless around Christmas time: “They are often forgotten about during that time of year.”

Their presence in the parish, neighborhoods and elsewhere is certainly appreciated and noticed, despite the fact that the Missionaries of Charity do not go out of their way to seek attention.

“I am very grateful for the service and witness that they give. They are holy, joyful sisters who give great testimony to a life of poverty, prayer and love,” Father Roelant shared. “They truly are living witnesses to the Gospel.”

Msgr. Halfpenny added, “They welcome each person in a way that affirms their identity as a beloved child of God. Their presence is another gift from the Father to the Church in Southeast Michigan.”

Their continuing presence in our archdiocese is indeed a present first gifted by Mother St. Teresa during her historic visits to the Motor City. And as the Missionaries of Charity continue to serve the poor and do the will of God in the years ahead, they will remain what Mother St. Teresa herself embodied: a divine gift that keeps on giving.