The Brotherly Love of St. Bernard

Read about St. Bernard recounting his experiences uniting familial affections to his divine love for the Lord, so as to mutually reinforce each other. 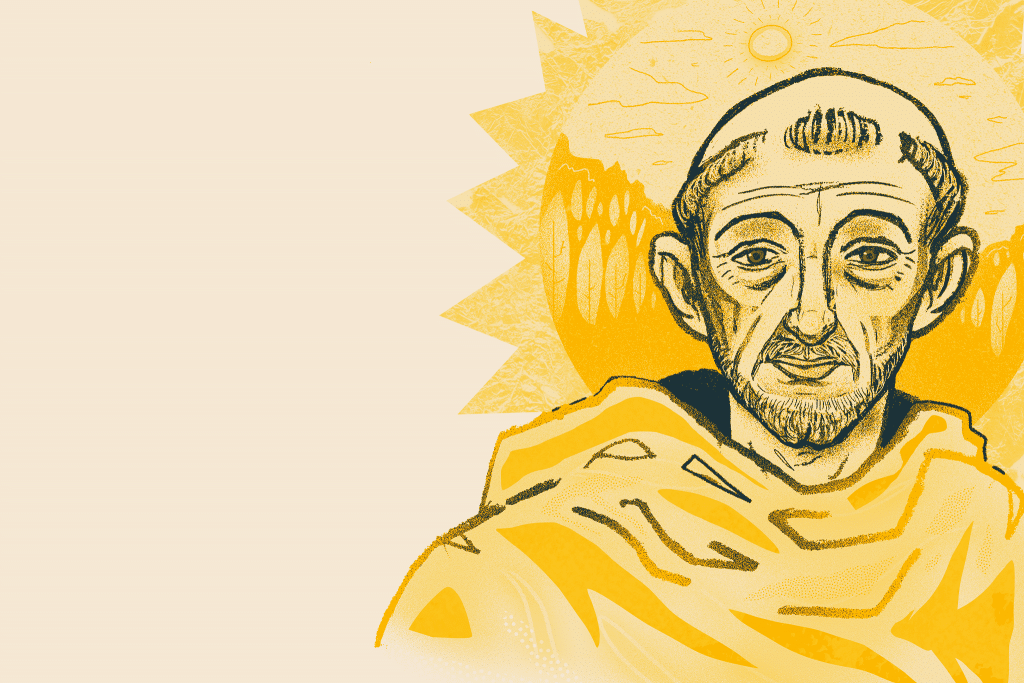 How long shall I keep my pretense while a hidden fire burns my sad heart, consumes me rom within?… Overpowering sorrow distracts my mind… For when he was taken away, he who enabled me to attend to the study of spiritual doctrine so freely and so frequently, my heart departed from me too. (“Song of Songs,” 26:1)

These are the words of St. Bernard (1090-1153), founding abbot of Clairvaux and doctor of the Church. He is famous for his abundant spiritual progeny, having founded 68 monasteries in 35 years and thus being responsible for attracting and forming tens of thousands of Cistercian monks. St. Bernard preached widely and it is said that mothers hid their sons when he came to town, lest his mellifluous words would entice them to join the monastery.

As abbot, he was the spiritual father of his monastery and, in that role, he fed his sons with nourishing doctrine as he taught them through regular conferences. His most famous teaching was an 87 sermon series on the “Song of Songs.” He went through the “Song,” verse by verse, in a monastic style of Lectio Divina. After 87 sermons, now collected in four volumes, he only made it to Chapter Four of the “Song” before he entered into that eternal song at his death on Aug. 20, 1153.

Surprisingly, the quotation above appeared in the middle of Sermon 26. After a few paragraphs, St. Bernard broke from his script and wailed in loud lamentation over the loss of his beloved brother: “Who would not be moved, even with iron for a heart, at seeing me there living on without my Gerard.” (26:3) He had held back his tears while he celebrated the funeral rites because he had held a false ideal that faith in the Resurrection should preserve him from grieving his brother’s loss.

His tender, human heart had been formed in a loving family, however, and he could not ultimately hold back the sensitive affections and terrible grief over the loss of his brother: “But the sorrow that I suppressed struck deeper roots within, growing all the more bitter, I realized, because it found no outlet.” (26:3) Then he took the opportunity to pour out his heart to the monks of Clairvaux: “But let it be poured out before the eyes of my sons, who, knowing my misfortune, will look with kindness on my mourning and afford more sweet sympathy.” (26:3)

St. Bernard was the third of seven children in a very close-knit, noble family. He was raised to be a knight in an era of chivalry, but he became fascinated by the higher ideal of becoming the servant of the one true King. He preached the romance of radical abandonment through monastic consecration so eloquently that he won over his whole family, including his father Tescelin, who joined his son’s monastery after the death of his wife. Tescelin had raised his six sons and one daughter to hold values of high integrity and nobility, while his wife Alethe formed their children with a deep and pious faith. The result was a family of saints, blesseds and venerables without an exception.

In St. Bernard, we discover that a zealous love for God and dedication to prayer, even lived in the context of an austere monastic life, do not diminish the bonds of love and affection that are meant to unite families. Furthermore, those bonds can grow even deeper in religious life and in friendship: “Was he not mine who was a brother to me by blood, a son by religious profession, a father by his solicitude, my comrade on the spiritual highway, my bosom friend in love?” (26:9)

St. Bernard received so much from his dear brother and friend, attributing the fruitfulness of his studies to him, even all his progress and all the good he had done. “Whoever loved me as he? … I was frail in body and he sustained me, faint of heart and he gave me courage, slothful and negligent and he spurred me on, forgetful and improvident and he gave me timely warning.” (26:4)

St. Bernard was a man of radical faith who wrote that God is “everything I can desire and love.” (“On Loving God”) His dedication to God was unquestionable and yet that never led him to forsake the beauty of human love and particularly family love. He did not see them as being in contradiction or competition but rather as mutually reinforcing, experiencing divine love through human love. He spoke plainly about his dependence on his brother and the great pain of his loss: “In every emergency, I look to Gerard for help, as I always did, and he is not there. Alas! Then I can only sigh in my misery, like a man deprived of all resources.” (26:6) From this holy fraternal friendship, we get a picture of what family love can grow into.

St. Bernard referenced the beauty of family life in other contexts as well. In another sermon, St. Bernard spoke about the “necessity” of the marriage of Joseph and Mary before the Incarnation could take place in the womb of Mary. (“Homilies in Praise of the Blessed Virgin Mary” II.13)  St. Bernard also proposed that St. Joseph’s doubt was in realizing his unworthiness to be in such a holy marriage and to remain in a family that was being entrusted with such sublime mysteries. (II.14) St. Bernard did not shrink from declaring the greatness of marriage and the capacity of the family to bear so much divine love.

This goes together naturally with one of St. Bernard’s principal themes: the mystical marriage of the bridal soul with the Divine Bridegroom. Yet he can only speak of that lofty, universal vocation by drawing insight from the intimacies of human marriage. The strongest images of the spiritual life are described with imagery that comes from family life: spouse, son, daughter, brother, sister, mother and father. Given the beautiful family life St. Bernard enjoyed growing up that he was able to take with him into the monastery, it is not surprising he was able to preach with such sweetness about these sublime mysteries.

For those interested in more details, the Trappist Father M. Raymond narrates their family life in a beautiful work of historical fiction: The Family That Overtook Christ.