Enter into the journey of how Frank and Shirley Schilling created the Shrine of Christ's Passion and how it seeks to inspire its pilgrims' spiritual lives. 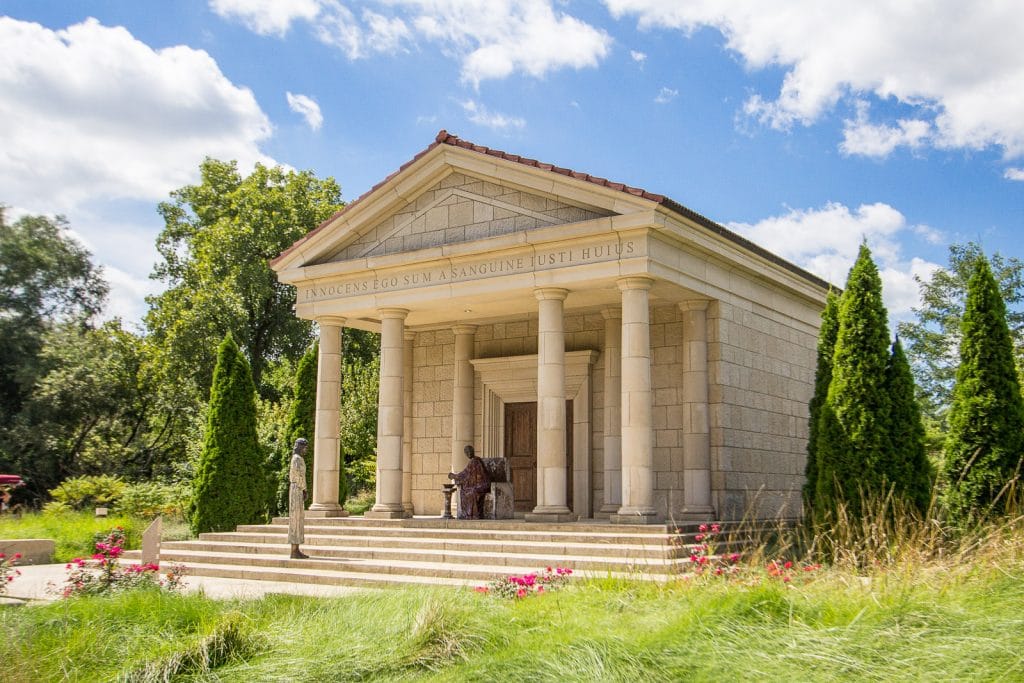 None of the properties moved the spirit of Fr. Sammie Maletta. For weeks, he and business owner Frank Schilling had been driving throughout the village of St. John, Indiana, looking for a site to build a new church. Suddenly, Father Maletta asked Schilling to pull into the gravel parking lot of a Marian shrine along Route 41. Father gazed across the farmland behind the shrine. He saw a white farmhouse with a silo and a rise in the land. He couldn’t believe his eyes.

“This is the site,” he said to Schilling with certainty. “This is where we are to build the church.”

Frank Schilling couldn’t believe his eyes, either. The farmland was once the homestead of his grandfather, Frank Wachter. The farmhouse was where his mother, Sylvia, was born. The shrine, with its 15-foot-high statue of the Virgin, had been constructed by his grandfather in 1954.

“Can’t be done,” Schilling told Father. “A real estate developer owns the land. He would never sell it to me.” But the developer did decide to sell, a seeming miracle. Schilling donated the hilltop land to the parish, where St. John the Evangelist Church has sat since 2008.

Then Schilling, a man of action, had an inspiration.

Why not build a simple path from the hilltop to the shrine? Even erect small Stations of the Cross along the way?

From that simple “why not” has evolved the monumentally scaled Shrine of Christ’s Passion. Funded entirely by Schilling and his wife, Shirley, and visited by more than 200,000 pilgrims per year from 40 countries, it is one of the most popular Catholic shrines in the Midwest.

The shrine’s main feature is a twisting, half-mile trail that connects 18 meditation grottos. Forty life-sized, finely detailed bronze statues depict Christ’s journey to Calvary, along with the Last Supper and the Ascension. The meticulously maintained grounds feature 1,000 trees planted among rolling hillocks and giant boulders trucked in from Wisconsin. The landscaping evokes the rocky, rugged terrain of the Holy Land.

A new supporter of the shrine is the recently installed bishop of the Diocese of Gary, Most Rev. Robert J. McClory. The Detroit priest who became Gary’s bishop in 2020 calls the Shrine of Christ’s Passion a “spiritual jewel” of his diocese. Its statuary is “magnificent,” he says, and its outdoor setting is a “literal and figurative breath of fresh air for those who need hope and healing.”

The shrine took seven years of hard work, Paul Anderson explains — and an investment by Frank and Shirley of millions of dollars — before it was ready to receive visitors, in the spring of 2008. Schilling asked Anderson, his longtime friend, to run the shrine as general manager. Anderson sold his business and now manages six full-time and 10 part-time workers, along with 100 volunteers. In 2019, the shrine team greeted 258 buses filled with spiritual seekers.

“Bishop McClory calls us the ‘gem of northwest Indiana.’ I would expand and say the ‘gem of the country,’ says an enthusiastic Anderson. The shrine incorporates innovative technologies that enhance the pilgrim experience.

At each prayer alcove, for example, visitors can listen to a brief spiritual meditation read by renowned Chicago broadcaster Bill Kurtis. As pilgrims wander the trail between stations, original music plays quietly in the background. The music fits the theme of the upcoming station — sometimes melancholy, as at the Agony in the Garden, sometimes pounding, as at the horrific nailing of Jesus to his cross.

The sound control system, stored inside Pontius Pilate’s court building, is incredibly sophisticated. When Bishop McClory led a Good Friday pilgrimage this year, 2,000 pilgrims along the trail could hear the bishop’s Passion meditations simultaneously through 135 speakers.

The extraordinary detailing of the bronze statuary is another highlight. It took Texas sculptor Mickey Wells three to six months to design and cast each one, especially concentrating on the physical anguish and divine forgiveness in Christ’s facial features. Frank and Shirley discovered the artist by “chance”— meaning by the Holy Spirit — while on a road trip to Santa Fe, New Mexico.

The religious gift shop is an attraction itself. Its products — and square footage — keep expanding and now include more than 17,000 individual items. Non-Catholics often come to shop, Anderson adds, and many take time to tour the grounds.

In 2011, the shrine accepted a gift of a monumental, stainless-steel statue, “Our Lady of the Millennium.” At 33 feet tall, set on a 10-foot pedestal, the image has become a regional landmark and shimmering symbol of Catholic faith along busy Route 41.

Next, Schilling placed a Sanctity of Life memorial near the gift shop entrance, testifying to the humanity of the unborn.

A Moses and the Ten Commandments meditation area opened in 2018. One hundred truckloads of boulders went into its creation, with a burning bush installation visible for a quarter mile. The exhibit pulls a pilgrim’s imagination right to the peak of Mt. Sinai.

Work has just begun on an Our Lady of Guadalupe shrine. It will include an adobe chapel exhibiting a true-to-size replica of St. Juan Diego’s miraculous tilma.

All of this physical activity is meant solely to prompt a response of the spirit, Anderson points out. “Our only purpose is to help visitors relate what happened 2,000 years ago to their lives in 2021. We just want their lives to be blessed — then go out and make a difference.”

I met many pilgrims on my own visit to the shrine, and communicated with others by email. All say that the Shrine of Christ’s Passion has inspired their spiritual lives.

Emily Birlson is a member of St. John Neumann Parish in Canton, Michigan. She grew up in St. John and watched the shrine develop from its beginnings.

“I love going home to see the new additions,” Emily expresses, but she really enjoys visiting on Good Friday with her family. “There is no more fitting place, other than the Holy Land, to relive that day walking in the footsteps of Jesus.”

Emily is amazed how the shrine makes the Passion so personal. “You can go up and hold Christ’s hand, sit in the garden with him, touch the sharpness of the crown of thorns.”

Kim Tyree is equally moved by her shrine experience, sharing that “I often found myself not being able to speak because I was so tearful.” On her return home to Gaylord, Michigan, she happily handed out brochures of “this magnificent place” to friends at her parish of St. Mary, Our Lady of Mount Carmel’s Cathedral.

Carmen Garcia and Maria Guzman, from Chicago, have traveled to the shrine multiple times. Today, they have brought their friend Leticia, who is visiting from Guadalajara, Mexico.

“I give this shrine a 10!” Carmen exclaims. She is an evangelist for the shrine, often bringing people from her parish. “La tranquilidad, la paz” (“the tranquility, the peace”) is what Maria loves the most.

Jennifer Matthew of Valparaiso, Indiana, brings her son Christian, 16, and daughter Eden, 12, with her today. They stop at each meditation site while Jennifer reads from an account of the Passion as a way to keep the Easter season alive.

My final conversation is with Kate Mulvey and her daughter Abbey Cozzo. Abbey knew that her mother, visiting from southern Illinois, would be touched by this special place.

“My husband passed away last May,” Kate shares. “This is like a religious closing, since we didn’t have a funeral for him because of COVID.” Kate’s voice begins to tremble, “So, it’s like a healing journey for me.”

Before leaving for home, I enter the empty tomb again and touch Jesus’ burial cloth. I listen to the pounding drum at the crucifixion scene as it slows and then stops, symbolizing the pounding of the nails but also the beating and fading of the Sacred Heart.

I press the listening button at the Ascension grotto, my final stop, and hear the deeply pitched voice of Bill Kurtis say, “Jesus knew from all eternity you would be here today.”

That is a sure fact for more than 1 million pilgrims who have journeyed to the Shrine of Christ’s Passion since 2008. Why not consider making the journey, too?