Many Faces but the Same Heart

Witness the Hanson family's story of battling infertility and choosing the path of adoption to be united with their three God-given children. 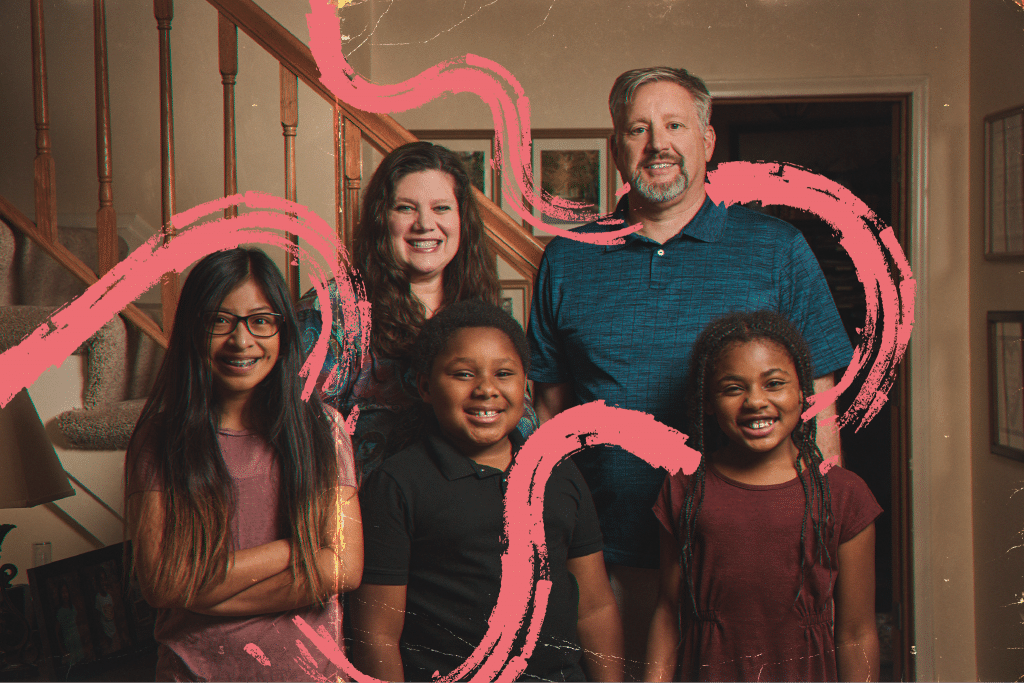 Bridget and Brian Hanson’s love story began with a Christmas party. A friend and co-worker of Bridget’s knew Brian, and they were introduced to each other on a festive December evening in 1994. The day after Christmas that year was their first date, and Bridget and Brian were married three years later in May of 1997.

Like most newlyweds, Bridget and Brian dreamed of health, happiness and one day starting a family, but as years went by, it became clear God was writing a different ending to their love story. After a string of negative pregnancy tests, the couple underwent extensive fertility testing and sought advice from various doctors, resulting in conversations about different treatments available. But there was a different plan at work.

Facing infertility weighed on them individually and as a couple.

“I remember the time when we were dealing with infertility — it just broke my heart — I remember as clear as day, Brian was sitting in the rocking chair, and he was so upset that he said, ‘I’m just so frustrated I can’t become a father,’” Bridget describes. She continues, “That’s the biggest thing I struggled with too, is knowing that you know, friends talk about having a child grow inside of them, giving birth and that’s something that you really grieve, you grieve for that loss.”

After nearly 10 years of marriage without any luck starting a family “the old-fashioned way,” the idea of adoption came up when a friend Brian had met through RCIA before their marriage described her work with an adoption agency.

“We just felt like God was tapping us on the shoulder and saying, ‘Might not be the path you guys were expecting to become parents, I’m giving you another path — look into it.’” Bridget recalls, “It felt kind of like, ‘I’m giving you an answer.’” But it wasn’t without hesitation. Brian especially feared a broken heart. What if they were to grow attached to a child only for the mother to change her mind? Would they be able to connect to these children as well as they would natural-born children? They wrestled with the thought both spiritually and emotionally as a couple when their friend suggested looking into adopting from Guatemala. It was the nudge they needed. “You have to turn your grief and look at the positive of God putting you down a different road, because these children are the children that are supposed to be in your life.” Bridget explains.

With that decision, their journey to meet their first daughter, Molly, began in 2005.

Initially, both new to the idea of adoption, Bridget and Brian read up on the program suggested to them and found various aspects that they liked. They liked that the children were in foster homes, and doctors did monthly checkups. Pleased with the program and happy to know the kids in foster homes were well cared for, they remained hopeful and continued on the path that would ultimately lead them to their daughter Molly.

In December of 2006, Molly was born. Brian, Bridget and both of their moms hopped on a plane to Guatemala to meet little Molly in July of 2007. Bridget was thrilled both her mom and mother-in-law could be there: “It was kind of neat to share that experience with them because if they couldn’t be in a room for a delivery of a baby, this was the next best thing we could offer. They spent the week down there getting to know their granddaughter.” Molly’s adjustment to their family was seamless. “She was great on the plane ride home; she slept through the night the first day home. She was truly the ideal baby, and she fit into our family so perfectly,” Bridget recalls.

Bridget and Brian had hoped to adopt more children from Guatemala, but the state of affairs between the United States and Guatemala was not in good shape, and adoptions from Guatemala were cut off in December 2007. They decided to look at different programs to pursue another international adoption, but weren’t sure any were the right fit. So when a co-worker of Bridget’s suggested foster care, both Brian and Bridget thought that maybe foster care with the intent of adopting again would be a good next step for their family. A short week after getting their foster care license, they got a call about twins from Detroit in the foster care system. At 6 days old, Nora and Noah were placed under the care of Bridget and Brian, and while it was “a bit crazy” going from one to three children, they felt the love Nora and Noah brought into their home.

Unfortunately, the road to adopting their twins was difficult and presented seemingly impossible challenges. The parental rights were supposed to be terminated not even a month after meeting Nora and Noah, but the judge changed the ruling and ruled for the twins to go back to their biological parents. So, in August of 2012, when the twins were 11 months old, Bridget and Brian had to say goodbye to the babies they had been raising as their own for nearly a year. Their worst fear had come true. But Bridget’s fierce faith and new motherly instinct convicted her with the belief that this was temporary. “I never gave up faith that they would come home.” Bridget says, “I just felt in my gut these are my babies; this is why God put them in my life, and they’re going to come home.” She put a box filled with the twins’ clothes under her bed, called it her “October box,” prayed and waited for their homecoming.

Some unforeseen circumstances led to a social worker bringing Noah back to Bridget and Brian in the earliest hours of Thanksgiving morning. When Noah saw Bridget, he put up his arms and cried, “Mama!” Noah was home. And Nora would soon follow. The adoption journey brought Bridget and Brian their three beautiful children, but the road at times was painful and uncertain.

As a multi-racial family, they’ve encountered uncomfortable looks and stares. They’ve faced questions, comments and curiosities, some of which were inappropriate, harmful or unsettling. But, clinging to values from her upbringing and her own Catholic faith, Bridget has found her approach to these situations, “We’re all people created by God, so we try to look at every person as if you’re looking at the eyes of Jesus, no matter how hard that could be.”  Despite the challenges, large or small, Bridget and Brian know this was the path for them. And through their story, faith was their anchor: “The faith that we had to have to stand strong through all of this, the words that were said to us; there’s no way we could have made it without the grace of God and praying a lot. It’s solidified my faith.”

The love they have grown in their family of adoption has been natural. Brian says, “Once you get the family in place, it’s amazing.” Illustrating a picture of the kids, Brian jokes lovingly, “They get along about as well as my brother and I did growing up — not well.” Bridget describes Molly as a total “daddy’s girl,” and Brian explains that he and Molly are on the “same wavelength.”

In their family, it’s essential to Bridget and Brian that they foster a culture of honesty. Molly, Nora and Noah know they are adopted and are aware of their stories. “If the children have questions, they get the truth,” Bridget says. They’ve found home in a community of diversity, and since they got to know Guatemalan culture when they went to meet Molly, the family stays close to their children’s cultural roots. They even keep in touch with a family who once lived nearby and had adopted a little boy from Guatemala. Now in South Carolina, they refer to him as “Molly’s Guatemalan brother.”

Today, Molly is an Irish dancer who dreams of one day becoming a doctor or engineer. At 14, she just made her confirmation this spring and will soon be a high school freshman. Nora and Noah are 9. Together, they, like most siblings close in age, “fight like a little, old married couple,” Bridget explains. “They know how to push each other’s buttons, but yet they’ll say that they’re each other’s best friend. They look out for each other.” Noah, “all boy,” has a “personality that fills the room when he walks in,” an infectious laugh and a natural talent for sports, especially basketball and football. As the peacemaker of the group, Nora likes to express herself through dance, is passionate about Barbies and creates her own little pretend YouTube videos, complete with dialogues and storylines.

You’d see typical family life playing out if you were to drop by the Hanson house on any given day of the week, school drop-offs and pick-ups included. Complete with their new goldendoodle puppy, the Hanson family may not have started as Bridget and Brian envisioned it would back in 1997, but they’d agree that they “wouldn’t trade it for anything.” As Bridget says, “We all look very different, but they have my heart.” 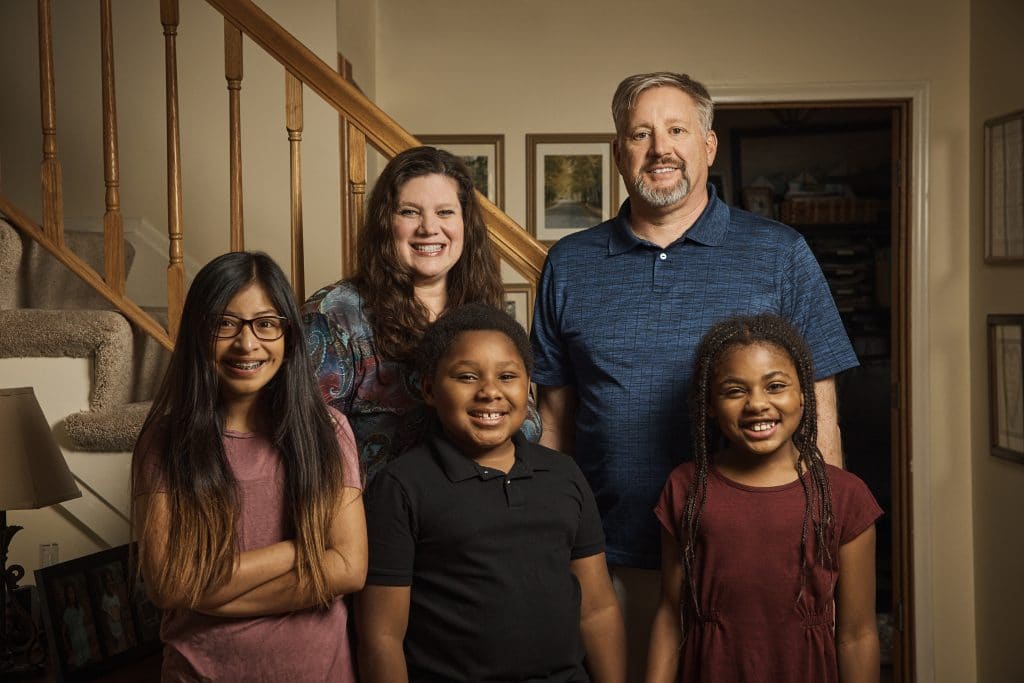 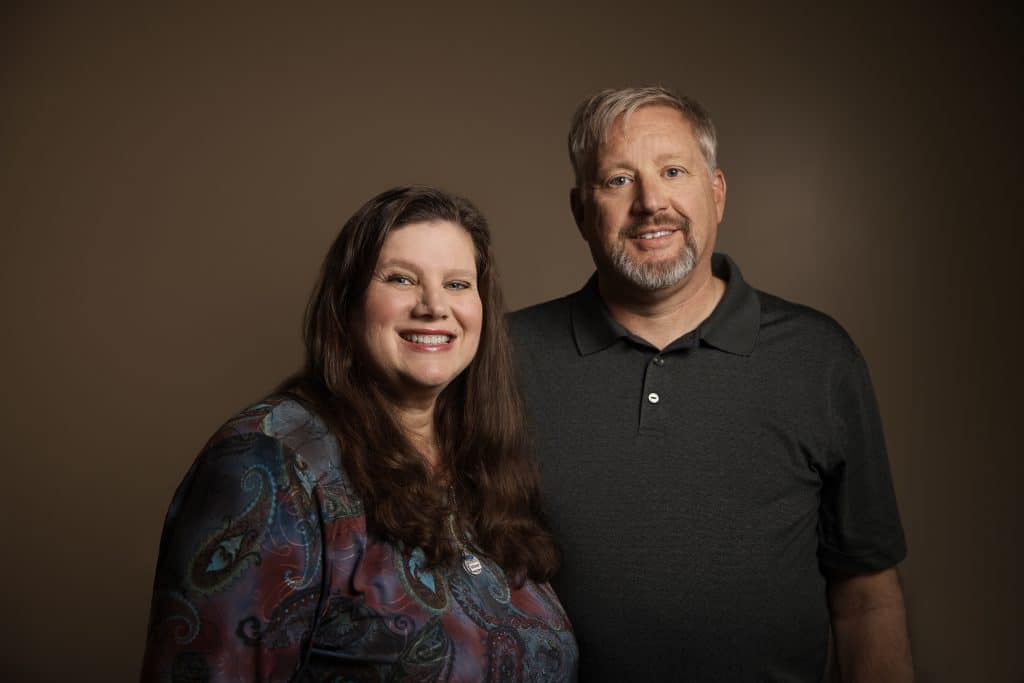