Sacred Heart has long been a forerunner of race relations in the Detroit, from the Civil Rights movement in the 1960s to their local pastoral ministry today. 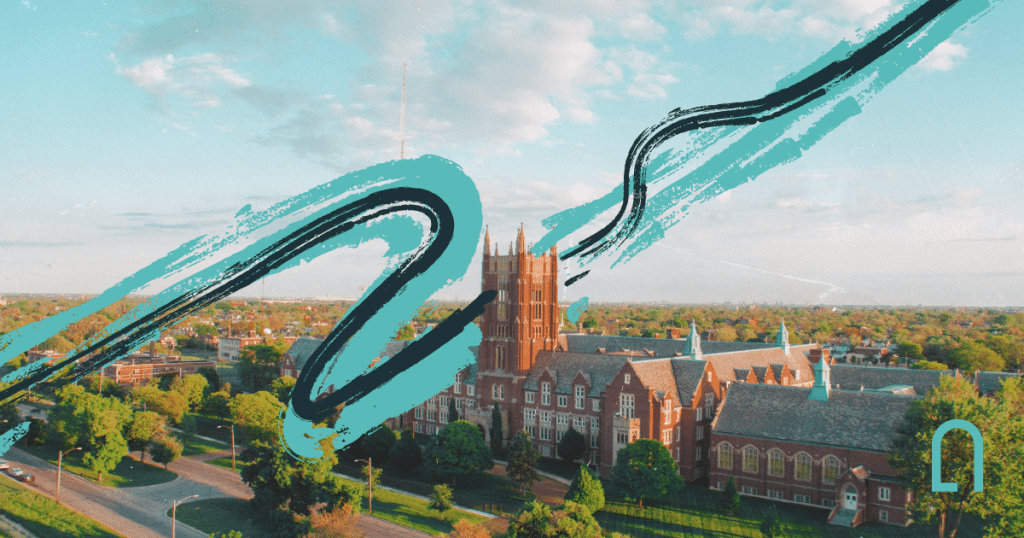 A passage from a local newspaper sets the scene:

“The shrill sirens of the fire engines sounded constantly in the neighborhood background. When darkness came the eerie sound of the police and fire sirens echoed ever louder through the curfew emptied streets … .”

But those words appeared more than 50 years ago in the pages of the Archdiocese of Detroit’s newspaper, now the Detroit Catholic, documenting five days of turmoil in July 1967 that originated only blocks from Sacred Heart Major Seminary.

A police raid on an unlicensed after-hours club located at Twelfth Street and Clairmount Avenue erupted into days of chaos that were silenced only after the U.S. Army and National Guard patrolled the streets. In the end, 43 were dead – 33 Black and 10 white individuals – nearly 1,200 injured, more than 7,000 arrested, and up to $144 million in property damaged or destroyed, according to the American Insurance Association.

The reasons for the two summers of unrest set decades apart are varied and complex. But a strong thread of Black inequality weaves the two together in a fabric of societal racism.

Yet Sacred Heart Major Seminary has stood resolute throughout as a caring neighbor to all and remains unscathed by the turbulence – except for one identifying feature. On that first day of fighting in 1967, it was discovered the face, hands and feet of the welcoming statue of the Sacred Heart of Jesus at the intersection of Linwood Avenue and Chicago Boulevard had been painted black.

Then-rector Monsignor Francis Canfield left the statue as is as a sign of the universality of Christ’s love.

“Most of us here interpreted it not so much as an act of vandalism as a gesture that the Negro wanted to feel Christ was for him as well as for the white man,” he told the Detroit Free Press.

He even ordered the statue to be painted black again when some anonymous painters a few weeks later restored the figure to its original white color.

Seminarians such as current Archbishop Allen Vigneron of Detroit and Bishop Earl Boyea of Lansing were not in class during that summer of violenceand returned in the fall to find the statue painted black.

Bishop Boyea called the painting a “great blessing” for the seminary.

“It was a sign that we are not somehow immune to what takes place all around us, and it is a call to be engaged,” he said.

“I thought it was a very significant sign of our neighbors recognizing that we are a Christian community but also reminding us that means we are in communion with them,” he said.

Sacred Heart has long been a forerunner of race relations in the city, as seminarians regularly reach out to their inner-city neighbors as part of their pastoral ministry. And it was the students who provided a key push in February 1965.

Sacred Heart collegians Eugene Fisher and John Clark created the Student Human Relations Education in Action Cell after spending a summer ministering on the south side of Chicago. This new group organized weekends in which a pair of seminarians would make overnight home visits to a Black family and discuss race relations. After the students spent Saturday night at the family’s home, they and the family would then travel on Sunday to a white family’s home in the suburbs to continue the conversation.

“We knew from experience the best way was to sit down with real people,” Clark told the Detroit Free Press, noting that nearly 90 percent of the seminary’s college students had participated.

The seminarians’ comments about the weekends were enlightening – both to themselves and readers.

“One thing was continually running through my mind: these people are just like my family.”

It was no surprise then when Monsignor Canfield a month later led a group of 400 students and faculty members as part of a group of 4,000 Detroit residents marching with others across the country in support of civil rights.

“The seminarians bore a large placard pledging themselves to ‘Christian Justice,’” the Detroit News reported.

The nationwide event on March 9, 1965, was organized to show solidarity with peaceful Black and white protesters in Selma, Alabama, who two days earlier had been attacked by state troopers on a march out of the city to the state capital. A total of 17 marchers were hospitalized and 50 treated for injuries in what became known as “Bloody Sunday” in the Black community.

As Sacred Heart students were peacefully protesting in Detroit, three priests who taught at the seminary were in Alabama, joining the Rev.Martin Luther King,Jr. on another attempt to march from Selma to Montgomery.

FathersJerome Fraser, William Cunningham and Paul Berg were among the protesters who were yet again turned back – this time peacefully by a federal injunction – but the day was still unsettling.

“My flesh quivered as we passed the spot where the tear gas was used and where the posse had assembled to ride into the praying, kneeling demonstrators on Sunday,” Father Fraser wrote in an essay for the Archdiocesan newspaper. “There is real tension here and the stares of people, police and troopers made me feel it.”

But FathersFraser and Cunningham refused to retreat from the mistrust provoked by racial strife. Two years later, when the city was still reeling from the five days of unrest, the two priests joined with Catholic laywoman, Eleanor Josaitis, to collect donations of food and clothing for survivors.

But they wanted to do more to heal the divisions between Black and white residents of the city. They put out a call in March 1968 for priests, seminarians and laypeople to meet at Sacred Heart for a discussion on what the Catholic community could do to root out racial injustice. Nearly 300 people showed up for what was the birth of a new endeavor called Focus: Summer Hope, writes author Jack Kresnak in his biography of Cunningham, “Hope in the City: A Catholic Priest, a Suburban Housewife and their Desperate Effort to Save Detroit.”

Word spread about the new initiativeso that its first meeting nearly a couple of weeks later at the University of Detroit drew 5,000 people.

“It was like a rally with Scripture readings, folk music and discussions of the Kerner Report findings about the 1967 civil disturbances, the nature of prejudice and Black Power,” Kresnak writes.

During three consecutive Sundays, priests spoke about race relations to an estimated 300,000 Catholics. When King Jr. was assassinated on April 4, no civil disturbances broke out in Detroit.

The gestures of unity offered by Sacred Heart Major Seminary through the years could often be described as bold. But the divine can also be found in the ordinary. Every Halloween, the seminary opens its doors to neighborhood children for the simple fun of trick-or-treating.

“It never is just about candy,” said current rector Monsignor Todd Lajiness. “It really is about being with people, praying with people, and letting them know as an institution that we really do care what’s going on in the community.