St. Joseph: Guardian of the mystery of God

St. Joseph understood the new role God planned for him by contemplating Mary’s motherhood, which drew him from fear to taking Mary his wife into his home. 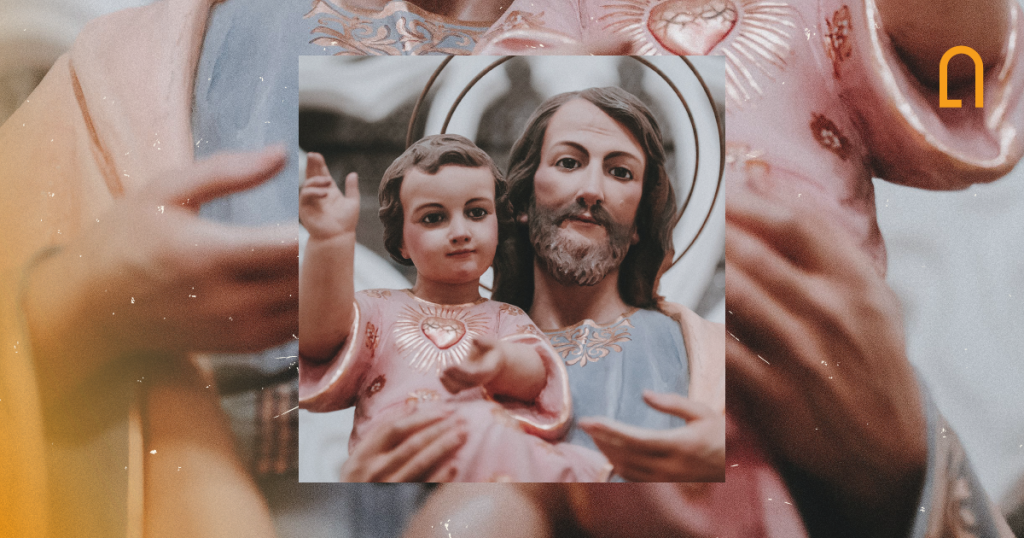 Joseph did as the angel of the Lord commanded him and took his wife into his home.” (cf. Mt1:24)

It was with this concise and gravid passage signaling the resolution of St. Joseph’s dilemma with which Pope St. John Paul II begins his Apostolic Exhortation on the person and mission of Joseph of Nazareth, Redemptoris Custos (RC). The incarnation of Jesus Christ, is, as Blessed Columba Marmion taught over a century ago, the mystery upon which all the mysteries of Christ, all the mysteries of our faith, rest.

Jesus in his own flesh brings to perfect fulfillment the promises made to Israel and the meaning of the name Jesus-Yehos ua’ — which means “God saves.” (cf. RC, #3) It is from this singular event, the Incarnation of the eternal Word, that the Blessed Mother, St. Joseph and all men and women who follow draw their identity.

Mary pondered in her heart what the angel Gabriel’s greeting to her could mean. It troubled her, just as this overwhelming knowledge was to trouble St. Joseph. This stupendous mystery must, if it is to find purchase in our imagination, disturb us and impel us to ponder it. We must allow ourselves to be changed by it, just as it transformed a pious virgin and a simple tradesman into an icon of the eternal Father — a spiritual father who would give Jesus a name and protect him.

Mary pondered the angel’s greeting, and Joseph the mystery of Mary’s motherhood, along with the Church down through the centuries ponders, as Pope St. John Paul II writes. (cf. RC, #3) St. Joseph was troubled, too, and his hesitancy was not born of the scandal that Mary’s pregnancy might present, but rather, the enormity of the mystery that the eternal God was made flesh; that he, a simple carpenter, would be the guardian of God’s plan to re-establish all creation in Jesus.

This, if you’ll allow me a small impiety, blew him out of the water, as it should you and me. Our profit is beyond our comprehension in joining Joseph in his perplexity and wonder.

St. Joseph understood the new role God planned for him by contemplating Mary’s motherhood, which drew him from fear to taking Mary his wife into his home. His troubled spirit found peace in the mystery of the Incarnation. It is in contemplating his life in light of Mary’s motherhood that Joseph’s identity and mission is disclosed to himself. This is true for him, for the Church and for the family, especially the men who, literally and figuratively, like St. Joseph, “will take Mary into their homes.” (Ibid.)

Pope St. John Paul II underlines this truth for us when he writes that it is in reflecting on St. Joseph’s response to Mary’s motherhood that the Church will be able to discover anew her own identity within the redemptive plan. (RC, #1) St. Joseph, the most silent of all God’s witnesses, speaks most powerfully as an advocate for practical action in the service of God’s plan to re-establish all creation in Christ. He is not consumed with the palaver of un-kept promises so prevalent in our age, but rather takes Mary into his home with his own yes to God’s plan for his life.

All of us need to operate from the truth of our identity in Christ. We need to catch the wind of the Spirit in our sails and allow ourselves to be borne by the Church to the renewal which is God’s plan for us. It’s when we have the courage to do this, to trust in the renewal that is God’s intention for the Archdiocese of Detroit and for us, that our transformation will bear the abundant fruit which is God’s plan. This is not only possible; it is the will of God for all of us, as it was the will of God for Mary to be God’s mother and Joseph God’s father and guardian.

Make no mistake; you and your family, your parish and your pastor, your priests and your bishops, are destined for renewal, for transformation, a role in the salvific mystery of Christ.  Don’t let the chaos set by the enemy weaken our families, our churches and our communities. Don’t let it cause you fear. Renewal and rejoicing — God’s plan for us — must be our strength.

I believe sincerely that St. Joseph is a privileged guide for us in this time, particularly so, when our families and our churches are under siege. We must return to the basics, the Incarnation, allowing it to inform us as to our identity and our mission. We especially need the steadying influence of the one whom God chose to guide and protect his family.

Joseph was Jesus’ guardian, and as members of his body, he is our spiritual guardian, too. No other saint occupies the same orbit as St. Joseph, no other saint is for all time the most fitting icon of the heavenly Father. He is not a simply a sentimental figure playing a secondary and supporting role in the Father’s plan, a stand in to be trotted out for Christmas pageants. He is a man of courage who spends himself for the sake of Jesus and Mary, a man who became, and is, an expert in the contemplation of the face of Christ, a teacher of the Jewish faith and an example of a righteous man who answered his family’s need with the sweat of his brow, a man whose juvenile pupil is none other than the living incarnate God.

St. Joseph is the man Jesus would have imitated as a boy; he would have born the cast of St. Joseph throughout his life, born it upon the Cross, born it into his Kingdom. St. Joseph is not known as the terror of demons because he is a subtle figure in the drama of Christ. He is a warrior who discovers himself in the wonder of Mary’s motherhood, he is the perfect spouse and perfect father, who in imitation of Christ lays down his life for his bride and family. In doing so, he became the measure of humble discipleship, of Christian fatherhood, of spousal fidelity and Kingdom chastity, all caught up in the mystery of God made man. St. Joseph is a man not of words but a man of action, who with your permission, will help you “take Mary into your home” as he did.

In the past few months, I have made a 33-day consecratory prayer to St. Joseph. In prayer the Lord has shown me that if I’m going to assist Archbishop Vigneron in unleashing the Gospel in the Archdiocese of Detroit, then I’m going to need more resources than I naturally possess. This isn’t false humility. It is just the facts for me and for all of us.

A consecration is a pious practice of the Church where one unites their prayers with the prayers of a saint, to seek the graces one needs for their particular state of life. St. Joseph is particularly apt for our time, as Fr. Donald Calloway, MIC, points out in his book, Consecration to St. Joseph, because he was and is a family man and a terror of demons — something we arguably need as much help with as we can get in our present age.

Pope St. John Paul II once again gives us counsel in the salutary practice of invoking St. Joseph, and expands the importance to include the primacy of our evangelical pivot as mandated in Unleash the Gospel: This patronage must be invoked as ever necessary for the Church, not only as a defense against all dangers, but also, and indeed primarily, as an impetus for her renewed commitment to evangelization in the world to re-evangelization in those lands and nations where-as I wrote in the Apostolic Exhortation Christdeles Laici – “religion and the Christian life were formerly flourishing and … are now put to a hard test.” (RC, #29)

I would like to take this opportunity, in response to Pope St. John Paul II’s exhortation, and on behalf of the Unleash the Gospel Council, to invite all of the Archdiocese of Detroit — and specifically her priests and fathers, including all men who possess the charism of fatherhood — to consider making a 33-day consecration to St. Joseph with me, beginning this Father’s Day, June 21, 2020.

To receive the daily emails and texts linking to the prayers in English and Spanish, text 33JOSEPH to 84576.

This consecration is appropriate both in the home and in our local parishes, an aid in our missionary pivot as an archdiocese and parish family. We will ask the beloved spouse of Our Blessed Lady to pray specifically for the renewal of our parishes and families in the Archdiocese of Detroit. We can also asking our entire faith community to pray to God to inspire and renew our fathers to be guardians of the mysteries of God, and with their parishioners and wives, bring about the fulfillment of God’s plan for his local church, for our family’s by the power of the Holy Spirit.

May you be blessed this Father’s Day and may the blessing of St. Joseph abide in your parishes and in your families.