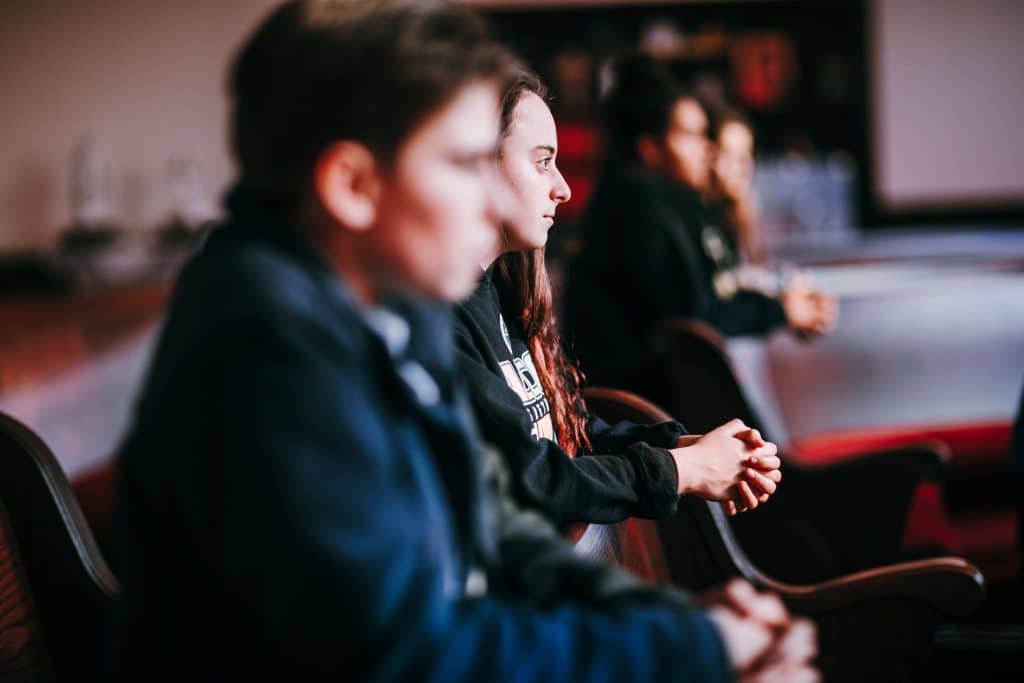 He is the venerable the world needs right now. When sacraments are limited and social distancing can make us feel disarmed in our mission of evangelization, Matteo Farina’s story offers divine consolation. An Italian teenager whose cause for sainthood was advanced by Pope Francis on May 6, Farina’s life isn’t one of seemingly inhuman holiness or sensational miracles that erroneously marks sainthood in many of our minds. It’s the story of a young teenager who lived a largely ordinary life with remarkable heroism. He radically strove to encounter Christ in the humility of typical teenage experiences: a rock band with his buddies, school, sports, dating. And when he came to face considerable suffering, he responded the way with which he responded to everything in his life, by “gripping the hand of Jesus.”

A happy and devout peacemaker

From the earliest years, Farina was a devout and studious Catholic. Beginning at age eight he made a weekly sacrament of reconciliation, prayed the rosary daily and went regularly to eucharistic adoration. At nine he read the Gospel of Matthew as part of his Lenten practice. Growing up in a strong Catholic family in Brindisi, a southern Italian town where his family attended a Capuchin parish, Farina nursed a deep devotion to St. Francis Assisi and St. Padre Pio. He poured over the writings of St. Thérèse of Lisieux. His friends affectionately gave him the nickname “the moralizer” as he was known for speaking often about God and being a peacemaker among his peers. He urged his parents to forgo Christmas shopping in favor of contributing to a fund he created for the missions in Mozambique. It was at nine years old that his devotion was grounded in a deep and life-abiding mission. In a dream, he heard St. Padre Pio: “If you managed to understand that those without sin are happy, then you have to teach it to others so that we can all go together, happy, to the kingdom of heaven.” From that moment Farina felt marked with a specific vocation and an urgency to evangelize to his peers.

Infiltrating his peers with love

In his journal he wrote: “I hope to succeed in my mission to ‘infiltrate’ among young people, speaking to them about God (illuminated by God himself); I observe those around me, to enter among them as silent as a virus and infect them with an incurable disease, Love!” While he was given a renewed sense of zeal for evangelizing love, the practical aspects of his life remained largely unchanged. In many ways, he was still a typical adolescent. He had an insatiable appetite for learning and playing musical instruments with his dad. He felt passionate about science, particularly chemistry, and aspired to a future in environmental engineering. He studied hard and received good grades. He didn’t feel the need to find a different group of friends but instead journaled the importance of “integrating” with his peers, staying “involved in the group without having to renounce [my] Christian principles. It’s difficult. Difficult but not impossible.”

The dream and mission from St. Padre Pio in no way left him longing for a different mission field it only confirmed what in his heart had been forming all along: the knowledge that people needed to encounter Christ any and everywhere: on the soccer field, in the halls of his school, during band practice, the hearth of his home.

Just months after he received his holy confirmation at age 12, Farina started experiencing painful headaches, ones he journaled were merely, “one of those adventures that change your life” and “helps you to be stronger and grow in faith.” These headaches were the first symptoms of a third-degree brain tumor. Over the next six years, Farina endured several brain operations, underwent chemotherapy and countless other treatments for the tumor.

Between hospitalizations, Farina continued to live by outward appearances, an ordinary teenage life. He kept attending school, formed a rock band ironically called “no name,” fell in love with and dated a girl, Selena, whom he called the “most beautiful gift” the Lord could give him. But interiorly Farina was climbing profound spiritual heights. After a stint in the hospital of Milan, he journaled: “You would like to scream to the world that you would do everything for your Saviour, that you are ready to suffer for the salvation of souls, to die for him to have the opportunity of showing him your love.”

Two years after the diagnosis he had his brain tumor removed and spent a month in chemotherapy in Milan. He returned home brimming with joy and the belief that the disease was regressing. But this joy was short-lived. His condition continued to worsen, and this surgery was the first of three. It was during this time that he made a devotion to the Immaculate Heart of Mary and received anointing of the sick. And while family and friends around him were grappling with the grief from the reality that they could lose him, Matteo was vocalizing a different sentiment: “It is useless to despond,” he writes in his journal, “we have to be happy and transmit happiness.”

Joy in the final moments

After his third operation, he was left paralyzed in his left arm and leg. There was nothing more for the doctors to do, they sent him home to live his last moments in peace in Brindisi. He received his last communion and died a week later surrounded by his friends and family.

For those who struggle with the senseless suffering of the world, this would seem like a most senseless loss. Here the young man who urgently desired to devote his life to evangelizing his peers was left half paralyzed. Unable to play the instruments he loved, unable to play sports with the peers who so deeply respected and loved him, unable to be Christ to those in his school. A life full of promise, and yet dying at age 19.

Farina didn’t see it that way. He would often repeat, “we must live every day as if it were the last, but not in the sadness of death, but rather in the joy of being ready to meet the Lord!” The “happiness” urged for him by St. Padre Pio in his nine-year-old dream was one he held deeply with him until his dying day. The postulator of Farina’s cause, Francesca Consolini described his dying years saying, “in him emerged a deep inner commitment oriented toward purifying his heart from every sin, and he experienced this spirituality not with heaviness, effort or pessimism; indeed, from his words there emerges constant trust in God, a tenacious determined and serene gaze turned to the future.”

The mystifying nature of the Catholic Church’s saints is that so many spend their lives largely unknown, tucked away in their corners of the world: bed-ridden with illness, isolated in cloisters, mediocre in learning, writing in journals they never believe a single other soul will read let alone a billion Catholics. Many die young, or alone, or hated or misunderstood. And from the graves the earth punctuates these lives with, God conjures our saints. With God, they continue their earthly mission to heal, to evangelize, to intercede. If we take anything from Farina’s life during this time it should be this: no earthly limitation exists for God. If we have a mission that we give to God, it will be done.

In one of his last journal entries Farina wrote: “My God, I have two hands, let one of them be always clasped to you in order to hold you closer in every trial. And let the other hand fall throughout the world if this is your will… as I know you by others, so let others know you through me. I want to be a mirror, the clearest possible, and if this is your will, I want to reflect your light in the heart of every man. Thanks for life. Thanks for faith. Thanks for love. I’m yours.”