The mind, heart and voice of this pope helped me fall in love with my Catholic faith. 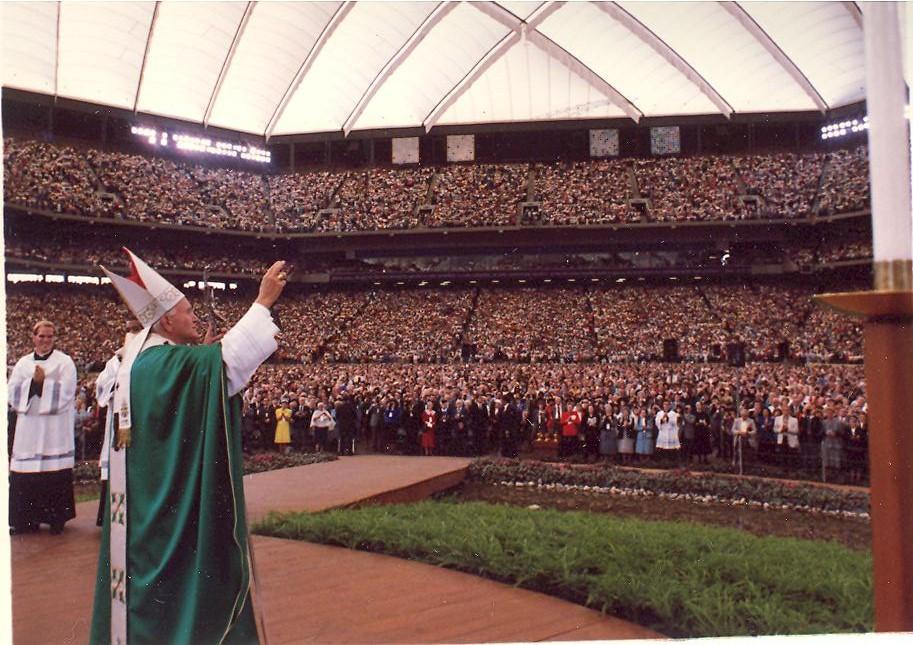 Karol Woytyla’s 100th birthday is May 18, 1920. The man who would later become a pope and a saint, lived through the Nazis, World War II and Communist oppression in Poland. He attended seminary in secret — risking his life to be a priest — and was a bishop at the Second Vatican Council. He visited Detroit multiple times when he was the Archbishop of Kraków and once as pope. It could confidently be argued that he was the most important figure on the world stage for the last 25 years of the twentieth century. His impact on global affairs and the Catholic Church are almost impossible to overstate.

Pope John Paul II wrote fourteen encyclicals and fifteen apostolic exhortations during his papacy. These documents helped the Church of the late twentieth century understand the richness, beauty, and depth of the Catholic faith during a time of unprecedented changes in the world. No longer was the default switch of the world flipped toward religion. Rather, the world after World War II was increasingly secular. Basic tenets of the Catholic faith — from basic harmony between faith and reason to the foundational moral reality of the natural law and divine revelation — were doubted and even mocked by forces outside, and at times within, the Church. The papacy of John Paul II was a tremendous gift to restore confidence in the Catholic Church for generations of Catholics looking for a way to understand and live the teachings of the Second Vatican Council. In fact, it is no stretch to say that John Paul II was the Second Vatican Council pope.

From a personal perspective, there is no public figure who had a deeper impact on my faith, my vocation and my love for Jesus Christ than Pope John Paul II. The mind, heart and voice of this pope helped me fall in love with my Catholic faith and opened my ears to hear the intimate and frightening invitation to my vocation to deeper discipleship and eventually priesthood.

Faith and reason work together

I attended a very small Catholic liberal arts school after high school. I was ready to ask serious questions of my Catholic faith — at times, in the hope of refute aspects which did not appeal to way I wanted to live. One of the first documents we read was his 1998 encyclical Fides et Ratio. This masterpiece begins “Faith and reason are like two wings upon which the human spirit rises to the contemplation of truth.” St. John Paul II convincingly makes the argument that it is antithetical to our human experience to drive a wedge between what we know to be true by faith and what we know as true from science, experience and natural knowledge. The very same God who brought into being all that exists and hold everything in existence, is the God of Jesus Christ. Faith and reason have one source and God does not speak in contradictory ways.

The truth of the Catholic faith is rooted in a serious and dedicated pursuit of finding this unity between theology and philosophy, revelation and science, faith and reason. Time and again the questions I brought to my understanding of what the Catholic Church taught found reasonable, confident, and convincing answers in the teaching of St. John Paul II. Reading his encyclicals, apostolic exhortations and various other writings opened up to me one of the great calls of the Second Vatican Council. The Church is called to be in dialogue with the modern world not done from the point of view of enemies or rivals or in some truncated “live and let live” manner. Our dialogue with the world includes a confidence in the unity of faith and reason. Therefore, the human mind is more dexterous when it is fully given over to Christ, who is “the way, the truth, and the life.” (cf. Jn. 14:6). St. John Paul II taught me that I lose nothing of my ability to think critically, be rigorously committed to truth, or pursue the goods of the sciences when I am a disciple of Jesus Christ.

Seeing the saint in person

Three times I was able to see St. John Paul II. In 1987, I saw him in Detroit; in 2000, I saw him in Rome; and in 2002, I saw him in Toronto. The most powerful encounter — by far — was seeing him at World Youth Day in 2002. I was about half a mile away and he was already rather beset by the some of the worst of his Parkinson’s disease. I made the trip with my brother and three of my cousins. We slept outside overnight and saw him arrive after the rains had cleared on the Sunday morning of the closing Mass. Even in his illness, he was clearly filled with joy and his joy illuminated the hundreds of thousands who were there. There was almost certainly no person in human history who was seen by more people around the world in his lifetime than St. John Paul II.

An infectious love for Christ

The heart of the pope was deeply in love with Jesus Christ. Now this may seem like an obvious statement to make about any pope, in fact it is probably seen as a prerequisite for the job. Nevertheless, it was infectious to me in a way that I had never before seen. Knowing his intellectual brilliance, is clear there were many things John Paul could have done with his life. His talents would have made him a gifted artist, politician or professor. He was a polyglot — able to speak twelve languages — and incredibly charismatic and comfortable on stage. Yet, all of these gifts were at the service of the Gospel.

When he prayed, it was obvious how deeply he desired to hear and speak with God. Watching him pray taught me to pray. His devotion to the Blessed Mother — his papal motto was “Totus Tuus,” meaning “totally yours, Jesus, through Mary” — deepened my own Marian devotion. I had once thought of the Rosary as something old fashioned and outdated. Seeing John Paul’s commitment to this simple and humbling prayer made me redouble my own devotion to pray the Rosary daily. His commitment to time in Eucharistic Adoration and seeking to understand God’s word taught me to pray — or at least to desire to pray — deeply, expectantly and consistently.

Committed to the new evangelization

Like St. John Paul II, I am an extrovert. I think this is another reason why I love him so much. He loved being around people. He would hate being quarantined! In fact, his last number of years living with a disease that made it increasingly difficult to communicate with people was certainly an especially bitter cross for him to bear.

Long before his papacy, St. John Paul II’s missionary voice was clearly heard. His theology of the body —written to defend the teachings of Pope Paul VI in Humanae Vitae — along with numerous other of his writings and homilies are a testament to his commitment to evangelization. More than any other figure, St. John Paul II translated the term evangelization from strictly “going to foreign nations where Jesus had never been heard” to this new concept. Evangelization in our day and age was needed for the countless number of people who had heard the Gospel message and turned away. St. John Paul II taught us to proclaim this new evangelization with a new ardor and with new methods and new expressions.

Again, the call of the Second Vatican Council more than anything was the call for all Catholics to reclaim their baptismal call to be agents of the Gospel proclamation. From the opening words of his pontificate — Be not afraid! — to his visits to 129 countries, St. John Paul II was a tireless evangelist. He wanted young people to hear the Gospel so he instituted World Youth Day. He wanted political leaders to hear the Gospel so he spoke with government leaders. He visited jails, senior centers and spoke to millions in every part of the globe to proclaim the good news that Jesus is alive, that God loves us, sin destroys us and that we can be saints!

This missionary pope taught me the importance not being afraid in proclaiming the Gospel in every part of my life. He spoke of the political demands of the Gospel — condemning the unparalleled evil of abortion, care for the rights of workers and demanding the right to the free expression of men and women of all faiths around the world. Wherever he went, his voice spoke kindly, confidently and clearly the Gospel message.

St. John Paul II was not perfect. He almost certainly should have done more to root out those who sought to close ranks in the light of the sexual abuse crisis rather than bring these challenges to light. Yet, heaven is filled with imperfect men and women. Saints are not perfect, they are sinners, broken men and women who tried time and again do God’s will. Despite his failings, John Paul was a great priest, and a great bishop and a great pope.

When I think about what it means for me to be a great priest, I often think of a young Father Karol Wojtyla who loved Jesus with his mind, his heart and his voice. Our circumstances are far different from his but the call is the same: to say “totus tuus,” through Mary, we are all yours, Jesus.