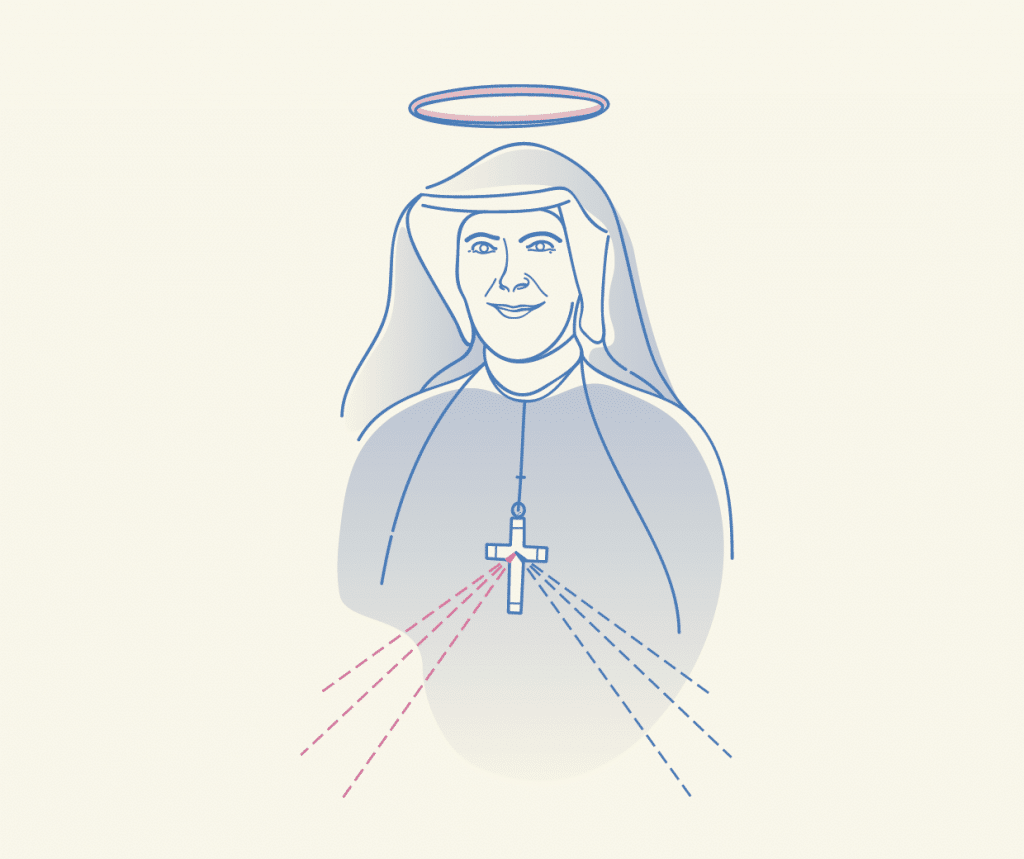 “I am love and Mercy Itself. There is no misery that could be a match for My mercy, neither will misery exhaust it, because as it is being granted — it increases. The soul that trusts in My mercy is most fortunate, because I Myself take care of it.”— Diary of St. Maria Faustina Kowalska

Divine Mercy Sunday was established by Pope St. John Paul II in the year 2000, during the canonization of St. Faustina Kowalska. At the age of 7, Faustina felt a calling to religious life. Her poverty was a serious obstacle. At a time when young women were expected to bring their dowries to the convent, she could not even afford to purchase a habit.

But in one of the visions she had experienced since the age of 19, Jesus himself told Faustina to enter the convent. Despite one rejection after another, she persisted until she found an order willing to take her — as soon as she earned enough money to pay for her clothing.

The message of Divine Mercy, the invitation to trust always in God, may have come to Faustina first because she most needed to hear it. Upon learning of her visions, her religious superiors had her examined for a psychiatric disorder. Her spiritual diary was kept hidden away for 20 years, just in case some heresy was lurking in its pages. And after just 12 years as a nun, Faustina succumbed to the tuberculosis that had caused her years of suffering — suffering that caused some of her fellow sisters to suspect she was exaggerating her illness.

Have confidence in the goodness of God

Sister Faustina often felt alone, out of place and unequal to the task God placed before her. Her diary captured this revelation: “All grace flows from mercy, and the last hour abounds with mercy for us. Let no one doubt concerning the goodness of God; even if a person’s sins were as dark as night, God’s mercy is stronger than our misery. One thing alone is necessary; that the sinner set ajar the door of his heart, be it ever so little, to let in a ray of God’s merciful grace, and then God will do the rest.”

One of the central tenets of the Divine Mercy devotion is understanding that God’s ability to forgive is greater than our own ability to sin. It is easy to focus on our own failings or to become overwhelmed by what we have done, or what we have failed to do. But St. Faustina reminds us to take the focus off ourselves and to keep it on God, whose mercy is endless.

Reflect and pray: Have you ever felt you did not deserve mercy or forgiveness? How can meditation on the Divine Mercy help someone overcome this misunderstanding?

Confession is a gift

The sacrament of confession was a regular feature of Faustina’s life as a nun. She encourages us to see it as a sacred gift to be celebrated. She captured the Lord’s view of the sacrament, writing, “Today the Lord said to me, ‘Daughter, when you go to Confession, to this fountain of my mercy, the blood and water which came forth from my heart always flows down upon your soul and ennobles it. Every time you go to Confession, immerse yourself entirely in my mercy, with great trust, so that I may pour the bounty of my grace upon your soul. When you approach the confessional, know this, that I myself am waiting there for you.”

Again, the focus is on trust. One of Faustina’s most well-known visions concerns the portrait of Divine Mercy — the now-familiar image of Jesus with two rays of light emanating from his heart. There are several renditions of the image. Faustina tried to create one herself but did not like the result. Subsequent efforts by professional artists were better, she said, but no one could capture the beauty of her visions.

Each version shares the most important element, however: the caption reading, “Jesus, I trust in you.” Regular confession is one way to express our trust in the mercy of God and to experience its healing effects.

Reflect and pray: Spend some time reflecting upon the image of Divine Mercy. Consider how confession is an act of trust in Jesus and resolve to make it a regular practice.

The Chaplet of Divine Mercy is a series of prayers prayed on regular rosary beads. In addition to the usual rosary prayers, it adds several focusing on the mercy of God. The one most repeated — and perhaps most familiar — is, “For the sake of his [Christ’s] sorrowful passion, have mercy on us and on the whole world.”

The less-used closing prayer, though, is “Eternal God, in whom mercy is endless and the treasury of compassion inexhaustible, look kindly upon us and increase your mercy in us, that in difficult moments we might not despair nor become despondent, but with great confidence submit ourselves to your holy will, which is love and mercy itself.”

Our repeated prayers for mercy are not designed to increase the mercy of God — already endless and inexhaustible — but to increase our own ability to believe in the depths of that mercy. As Faustina captured in her diary, “Oh how much I am hurt by a soul’s distrust! Such a soul professes that I am holy and just, but does not believe that I am mercy and does not trust in my goodness.”

Those who have confessed and asked forgiveness are forgiven. Sometimes we need to take the time to accept this truth.

Reflect and pray: Learn to pray the Chaplet of Divine Mercy. With each repetition of its prayers, reflect on all for which you already have been forgiven, even as you pray for mercy for yourself and others.

Be merciful as God is merciful

St. Faustina wanted to be the presence of Christ to those around her, always radiating Divine Mercy. She prayed to have mercy in her eyes so she would look with compassion, rather than judgment, on her neighbors. She prayed that her hands and feet would be filled with mercy, so she would rush to the aid of others and help in whatever way she could. She ended this prayer with, “Help me, O Lord, that my heart may be merciful, so that I myself may feel all the sufferings of my neighbor. I will refuse my heart to no one, I will be sincere even with those who, I know, will abuse my kindness. I will bear my own suffering in silence.”

Faustina’s visions confirmed that this was God’s will for her life — and for our own. She writes, “Then I heard the words, ‘I am glad you behaved like my true daughter. Be always merciful as I am merciful. Love everyone out of love for Me, even your greatest enemies, so that my mercy may be fully reflected in your heart.’”

Reflect and pray: Is there someone who needs your forgiveness but who may be too fearful to ask for it? Consider ways you can show mercy, even in small ways, to the people in your life.