Daily meditations for the Easter Triduum 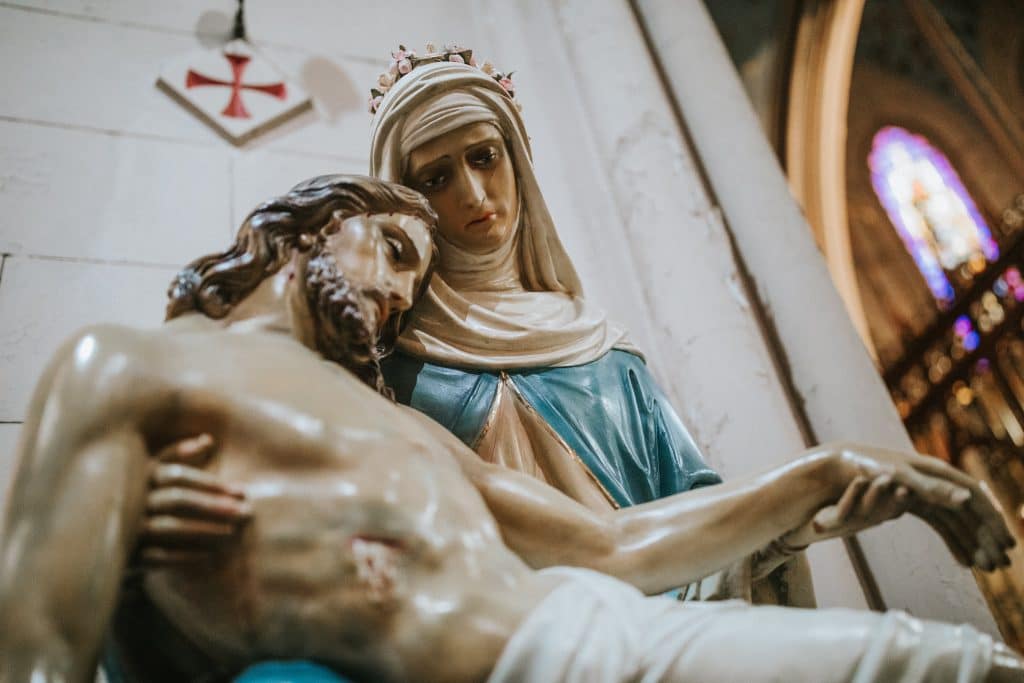 As Lent concludes and we enter the Easter Triduum, the Church invites us to draw close to Jesus in his suffering and death. We can do so by participating in the Triduum liturgies, but we can also do so in our own personal prayer. We hope these daily meditations will complement or guide your individual or family prayer from Holy Thursday through Easter Sunday.

While the story might seem familiar to us now, everything that happened on Holy Thursday would have been startling to Jesus’ followers.

They gathered by themselves in the Upper Room to eat a Passover meal, and instead of a lowly servant, it was Jesus who washed their feet. Jesus — who just days prior had ridden into Jerusalem on a donkey, glorified by people carrying palm branches and singing “Hosanna in the highest” — was on his hands and knees, with a towel around his waist, scrubbing the dirt from the lowest part of their bodies. The God-King was a servant, not a tyrant.

He shocked them again when he said that the bread and wine (a normal part of a Passover meal) were more than that. This was his body, his blood; this ritual they’d celebrated all their lives took on an even deeper meaning: they became one with their Rabbi and Lord. A once-distant God was not so far away after all.

In the same breath he predicted their betrayal and proclaimed his love. He declared their power to forgive sins, and he expressed his sadness at the way they’d turn from him. Though the disciples didn’t understand it, they would soon see that Jesus loved them beyond their shortcomings. God forgives us even when we can’t ourselves.

The events of Holy Thursday herald a new Kingdom: where the weakest are the strongest, the distant are brought near and the greatest sinners receive the greatest mercy. Jesus reorders the social structure by pouring warm water over dirty feet. He breaks bread and tears down an empire. He speaks forgiveness, bringing God closer than ever.

Truly, the Kingdom of God was at hand. It wasn’t the Kingdom anyone expected, but it’s a Kingdom in which everyone would be included. It grows and multiplies as we follow his command: “I have given you a model to follow, so that as I have done for you, you should also do.”

The Incarnation takes on new meaning on Good Friday. God became man and experienced the full human journey — joy, of course, but also the deepest sufferings. Even two thousand years later, the message resounds: in our worst moments, we are not alone. God understands.

Jesus understands the pain of betrayal. His dear friend handed him over in exchange for money. Another friend denied even knowing him. Most of his friends ran away in his time of need, not offering so much as a kind face to lighten the burden. In one way or another, we’ve felt this too: the moment when someone you thought you could depend on lets you down. When we feel the most alone and abandoned, we know that God is there, weeping with us.

He stands beside us when we feel rejected by society. It seems like the whole world turned against him on that day; everyone from the priests to the peasants mocked and misunderstood him. He came as a king, so they crowned him with thorns. He boasted of God’s strength, so they laid a burden on his shoulders. When our convictions turn people away, we can be certain Jesus is standing with us when it seems no one else is.

The nails in his hands, the hours carrying a cross, the lashes across his back — Jesus experienced unbelievable physical pain. He has felt the way bodily suffering can test our spirit’s strength. Whether it’s an illness we’re fighting, a taxing job or a chronic pain that wears at our endurance, we find new meaning in knowing that God does not leave us to suffer alone.

And even Jesus — who knew his Father’s love more than we could ever imagine — has asked the terrifying question, “My God, my God, why have you abandoned me?” For those of us who have been to the depths of despair, asking where God is, it can be hard to believe that God’s own beloved Son has been there, too. But it’s true: he has felt that emptiness and fear, that deep aloneness of not knowing where God has gone.

In our times of greatest need, we can call upon him — not because he is “better than” or beyond our needs, but because he knows them to the core.

“For we do not have a high priest who is unable to sympathize with our weaknesses, but one who has similarly been tested in every way, yet without sin. So let us confidently approach the throne of grace to receive mercy and to find grace for timely help.” (Hebrews 4:15-16)

Holy Saturday: Between Death and Resurrection

What were those days like between Jesus’ death and Resurrection? How deep was the quiet in the hearts of those who loved him? Was it strange to watch the rest of the world keep moving as if nothing had happened, as if all was well?

Jesus’ disciples had seen him perform miracles. This was the man who walked on water, who calmed storms with a word, who multiplied bread and fish, who loved them like no one had loved them before. And now, he was just … gone? The solid ground on which they stood had vanished without a trace. The Scriptures may have predicted Resurrection, but their hearts cried out with confusion.

Each of us has lived through a moment like Holy Saturday; in fact, we may spend good portions of our life there: in the mystery, on the precipice, inside a cloud of unknowing. In these times our hope and faith seems less like a blazing fire and more like a smoking, huddled ember, trying its best to keep smoldering among the ashes.

Maybe it was a time of grieving the loss of a loved one. We wondered, how will I make it through this? Will I come out on the other end? Perhaps some aspect of our lives became unstable — finances, friendships or even faith in God — and we didn’t know how to make sense of it. It may have simply been the general anxiety that accompanies being alive and having to face a world that is mysterious and ever-changing.

While the quiet anticipation of Holy Saturday can be uncomfortable, it’s important that we don’t simply rush to Easter Sunday. This day is here to remind us that we don’t always have easy answers or a sense of control.

Doubt and suffering, fear and confusion, loss and uncertainty — they’re not failures. They’re part of being human.

Feeling “in-between” or unsure do not mean our faith has flickered out or that God has left us alone.

On the contrary, it may just mean that God is doing something new. He certainly was on Holy Saturday.

So instead of losing hope, we approach these moments with a new watchfulness. We pause with wonder at the quiet, at the smoke and at the shifting ground.

At the edge of the tomb of our old life, we patiently await the new life God has in store.

Easter Sunday: You Were Raised with Christ

As we read the stories of the resurrected Jesus revealing himself to his disciples — Mary Magdalene, Peter, John and many others — we might brush past the details and skip to the summary: He is Risen! Christ rose from the dead. He saved us by dying and rising again!

Just as Jesus reappeared to his followers one by one, he appears to each of us. He encounters us at the tomb or on the road or in our home or in our workplace. Christ’s Resurrection saves you as a distinct person, right where you are. The details of your life aren’t unimportant; in fact, it is in those very circumstances that God wants to reveal his glory.

What road are you on? Where are you heading? Are you “in-between” where you’ve been and where you want to be? God is on the road with you, showing you his path.

What tomb are you standing at, and what loss are you mourning? Christ wants to share his healing power.

Are you simply going about your daily life, working or resting, awaiting the next step? The resurrected Jesus is there to lift your eyes from the ordinary to the extraordinary.

St. Paul writes to the Colossians, “If you were raised with Christ, seek what is above … When Christ your life appears, then you too will appear with him in glory.”

Jesus appears to us, wounded and glorious. He does not blur out the details of our lives but makes them shine in his light. We can see the living color of the world: the flowers blooming, the sun and sky shimmering, the rich feast he has prepared for us. He invites us to live Easter Sunday each and every day.

Christ is risen, and so are we.