America’s Church — and Michigan’s, too 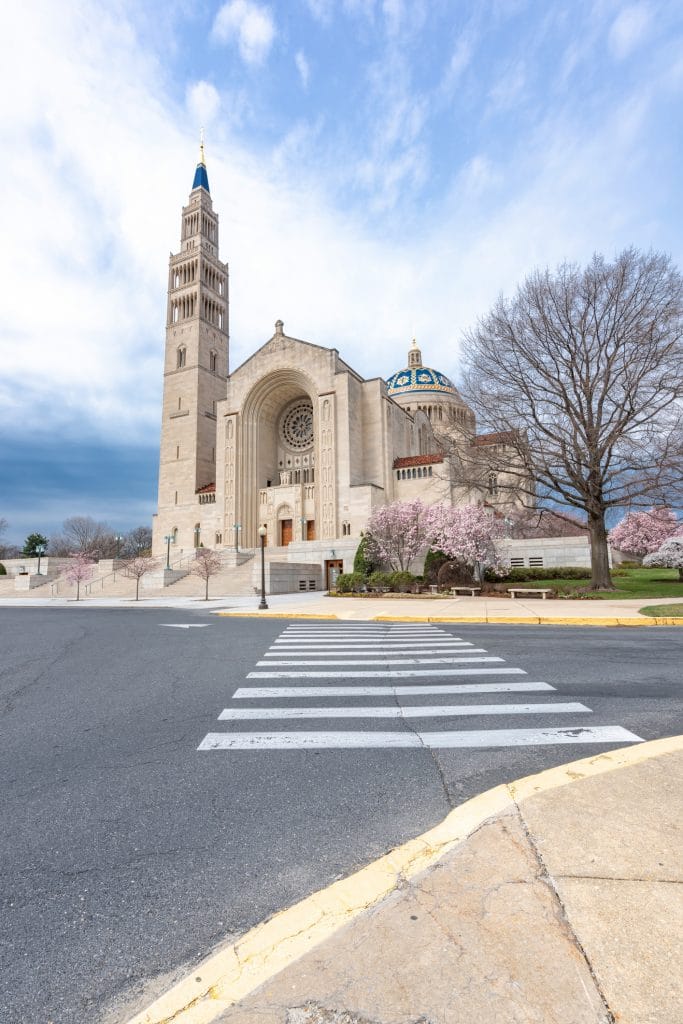 Msgr. Thomas Shahan had reason to be anxious. As rector of the Catholic University of America in Washington, D.C., he had been in many high-level meetings, but not thishigh.

Across the desk from Msgr. Shahan sat Pope Pius X. Monsignor had made the long boat trip to Rome to present an extraordinary vision. He wanted to build a church on campus, and not just a university chapel. It would be a monumental shrine to the Mother of God and a place of worship for the entire nation.

Would the Holy Father give his approval? A hopeful Msgr. Shahan wondered.

Pope Pius X did approve — and then some. He was so impressed by the presentation that he drew Italian lira worth $400 from his desk drawer and presented them to Msgr. Shahan.

This personal gift, on the feast of the Assumption in 1913, was the second-earliest donation to help build the Basilica of the National Shrine of the Immaculate Conception, popularly known as “America’s Catholic Church.” (The first donation, incidentally, came from Msgr. Francis S.J. Van Antwerp, vicar general of the Diocese of Detroit.)

Today, with its 80-plus chapels, five monumental domes, Marian shrines representing 22 nationalities, six daily Masses and room for 6,000 worshippers, this 10th-largest church in the world is a place of historical significance and profound beauty for Catholics everywhere and visitors of every belief.

The national shrine also is a place of pride for Michigan pilgrims. It has the world’s largest installation of Pewabic Pottery ornamentation, designed by Mary Chase Stratton, the pottery’s co-founder and one of Michigan’s most gifted artists. 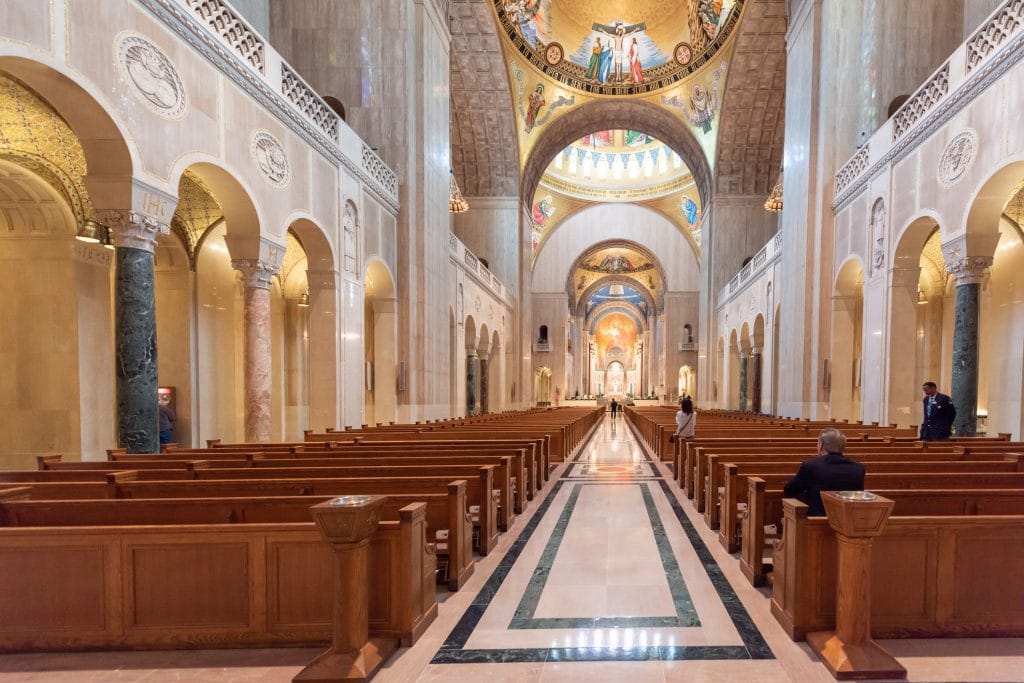 As volunteer pro-life coordinator for the Archdiocese of Detroit, as well as liaison for the annual Youth Rally and Mass for Life, Kathleen Wilson has attended every March for Life in Washington, D.C., since 2003. Although Kathleen has visited the National Shrine of the Immaculate Conception 15 of the past 17 marches, she keeps discovering aspects of the shrine’s art, architecture and liturgies that touch her spirit.

“Being a part of the universal church, worshipping in accord with brothers and sisters from so many nationalities drawn to our universal mother,” says Kathleen, has drawn her closer to Jesus on her most recent visits. “I’ve also benefitted greatly from sitting quietly before a piece of art, or right beneath one of the five domes in the upper church that lay out our salvation history.”

In these moments of Lectio Divina, or “holy reading” of the spiritual message within the sacred artwork, Kathleen asks the Holy Spirit “to stir in me what he would like me to know through this work of art.” She cites a moving sense of Mary’s intercession after January’s march, while praying for a sick acquaintance with her husband, Jim, before the Virgin of Antipolo, Our Lady of Safe Passage. The statue is in a lesser-known chapel of the Filipinos tucked behind the lower church altar— a perfect place for heart-to-heart prayer.

Father Joseph Kirkconnell luckily does not have to travel far to enjoy this sacred place. He is studying for a doctorate in catechetics at Catholic University and lives just blocks from the shrine.

A favorite meditation spot for Father Kirkconnell is the Our Lady of Guadalupe chapel. It features pilgrims from North, South and Central America honoring the “Queen of the Americas.” Colorful walls wave in and out to create an embracing sense of movement.

“The first time I stepped into the chapel, I felt as though Mary was surrounding me with her presence,” Father Kirkconnell recalls. He also appreciates the Our Lady of Sorrows chapel “just for its sheer beauty. The green and black marble is just stunning. It’s hard to put into words.”

The national shrine’s Great Upper Church, built in the Romanesque/Byzantine style of the early church, is so imposing — a massive central dome, a 329-foot-high bell tower and “main doorways so large,” says archdiocesan priest Father Salvatore Palazzolo, “giants could walk through them” — it’s hard to believe the upper church was almost not built.

Catholics at first followed Pope Pius’ lead and donated generously to make Msgr. Shahan’s vision real. Monsignor especially sought the help of Catholic women’s organizations; the Detroit chapter of the National Council of Catholic Women gave the first contribution, in fact. One appeal invited every woman named Mary or a derivation of Mary to give $1. The outreach to America’s Mary’s generated an amazing 30,000 responses.

The ground-level crypt church was completed first, in 1931. But donations dried up because of the Great Depression and World War II. Shrine leadership postponed construction of the Great Upper Church for 24 years, until 1955.

When the upper church was finally completed in 1959, visitors were stunned, as they are today, by the dramatic Christ in Majesty mosaic in the sanctuary. This very human Jesus has realistic body features, but a fiery halo bespeaks the Lord of Creation. It is the largest mosaic of Jesus in the world.

“There are 34 feet of mosaic space between his wounded hands,” Kathleen points out, speaking of hands that are more than 5 feet high. “You are truly confronted with his power and might.”

“Try it for yourself,” Father Palazzolo says. “There’s nowhere in the basilica you can look at the face of Christ and not feel he’s staring right back at you!” The lesson Father keeps relearning in this holy space: “When life is hard, look up! And keep your eyes fixed on Jesus.” 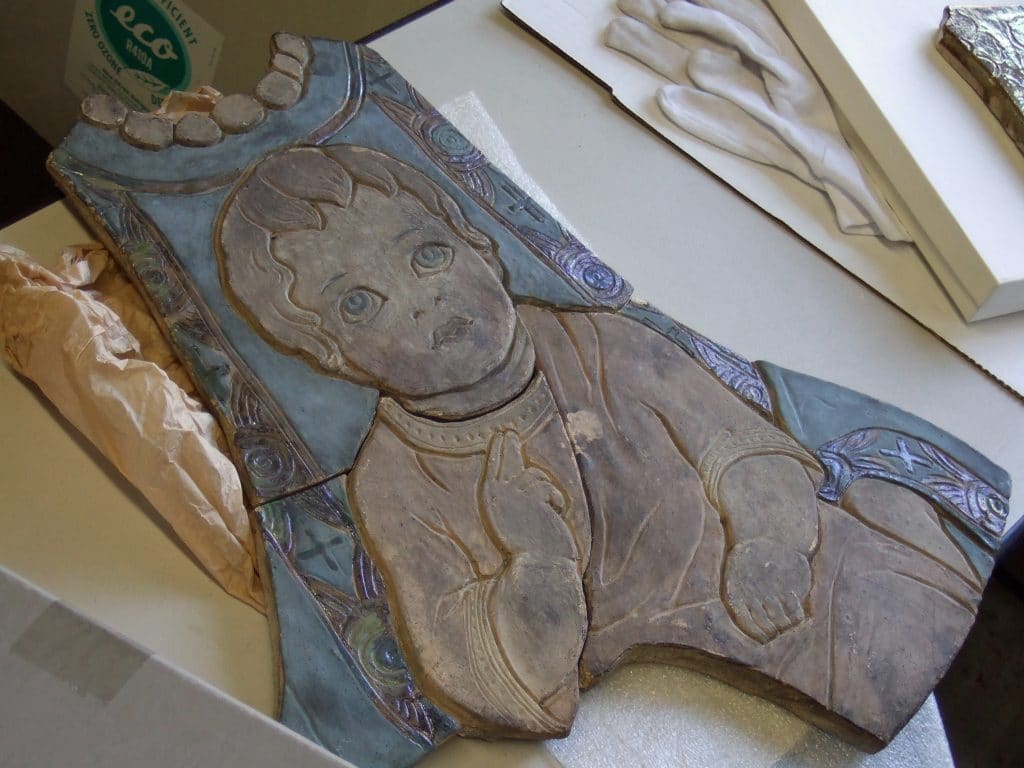 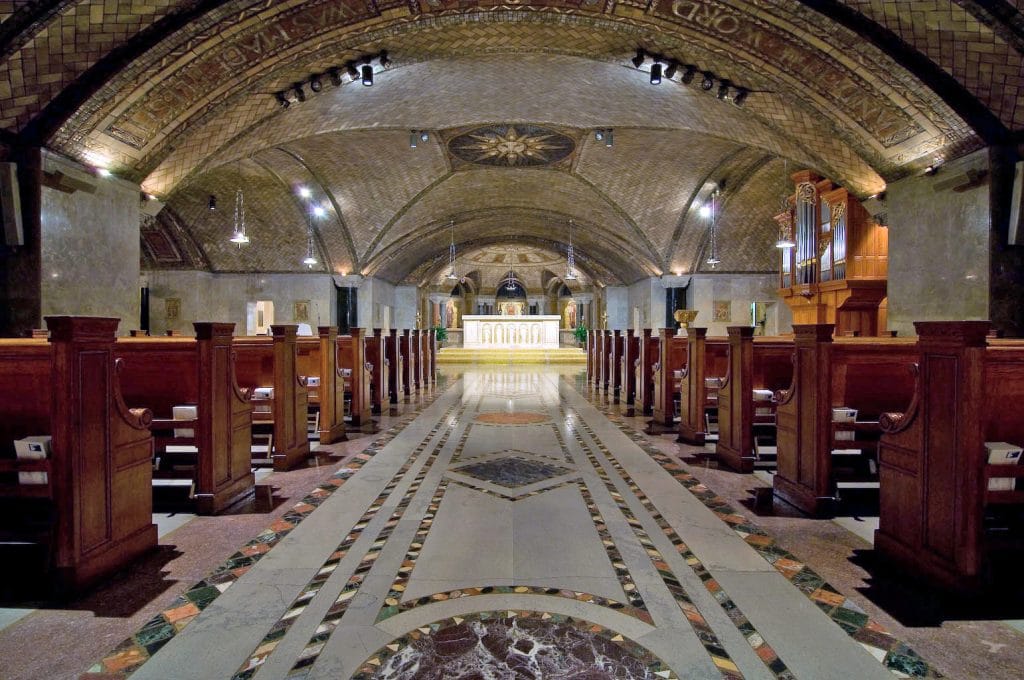 In contrast, the crypt church has a subdued, cavern-like feel, intentionally evoking the catacombs of Rome. Yet the worship area is filled with welcoming light that shines through 15 half-moon stained glass windows above 15 mosaics, almost all depicting women saints, including the patroness of the Detroit archdiocese, St. Anne.

Pewabic’s Stratton wrote that she was particularly proud her work contributed to the “Spirit of Motherhood” and the “shrine ideal” of “devotion to the Virgin Mary and the women of the Scriptures.” The crypt’s massive stone arches and ceiling vaults are the canvases upon which she expressed her spirituality and God-given genius.

Annie Dennis, education director at Pewabic Pottery, graciously gave me a tour of its archives while telling stories about the pottery’s history. She points out that after receiving the national shrine commission, Stratton traveled to shrines and churches throughout Europe for inspiration. Stratton explored the Roman catacombs and studied the art of the first Christian centuries, which helped her create imagery in keeping with the crypt’s design, Dennis explains.

Stratton and her team worked steadily from 1924 through 1926, producing tens of thousands of glazed tiles and scores of ceramic plaques and ornaments. Identical backups were cast in case of damage. These backups are kept in the Pewabic archives today.

Wandering through the crypt’s three apses, or semicircular worship areas, a pilgrim will discover glorious Pewabic ornaments representing God the Father, the life of Christ, prophets and martyrs and thousands of nature images. Looking up, the Holy Spirit as a dove seems about to plunge from the vaulted ceiling. (View an exact match of the medallion in Pewabic’s exhibition gallery, in the building the pottery has occupied on Jefferson Avenue since 1907.)

Stratton’s remarkable creations earned her a second commission, designing the national shrine’s Stations of the Cross.

“Sometimes an artist is only meant to do one thing in life,” says Dr. Geraldine Rohling, national shrine archivist. “In Mary’s life, I think the shrine was it, her pinnacle. You feel you are in a holy place because of her artwork.”

When Father Kirkconnell walks about the crypt chapel taking a break from his studies, he’s reminded of his days as a seminarian at Sacred Heart Major Seminary — which is blessed with the second-largest collection of Pewabic tiles in the world.

Consider making a pilgrimage to what Pope Pius X called a “masterpiece of religious architecture.” Expect to leave even more proud to be Catholic because of the magnificence.

Seek out the Slovenian shrine to Our Lady of Brezje, where a marble tablet depicts Michigan’s heroic “snowshoe apostle,” Bishop Frederic Baraga. Find his portrayal in stained glass in the upper church sacristy, along with pioneer priest Father Gabriel Richard.

“My relationship with the Blessed Mother has become a rich reality in large part because of the blessings of so many moments spent in this beautiful place,” remarks Kathleen Wilson, who has made more than 50 visits with her family to the national shrine. “Think of it as time with someone you love, a chance for new discovery and intimacy.”

May greater intimacy with Mary and her son result from your pilgrimage, too. 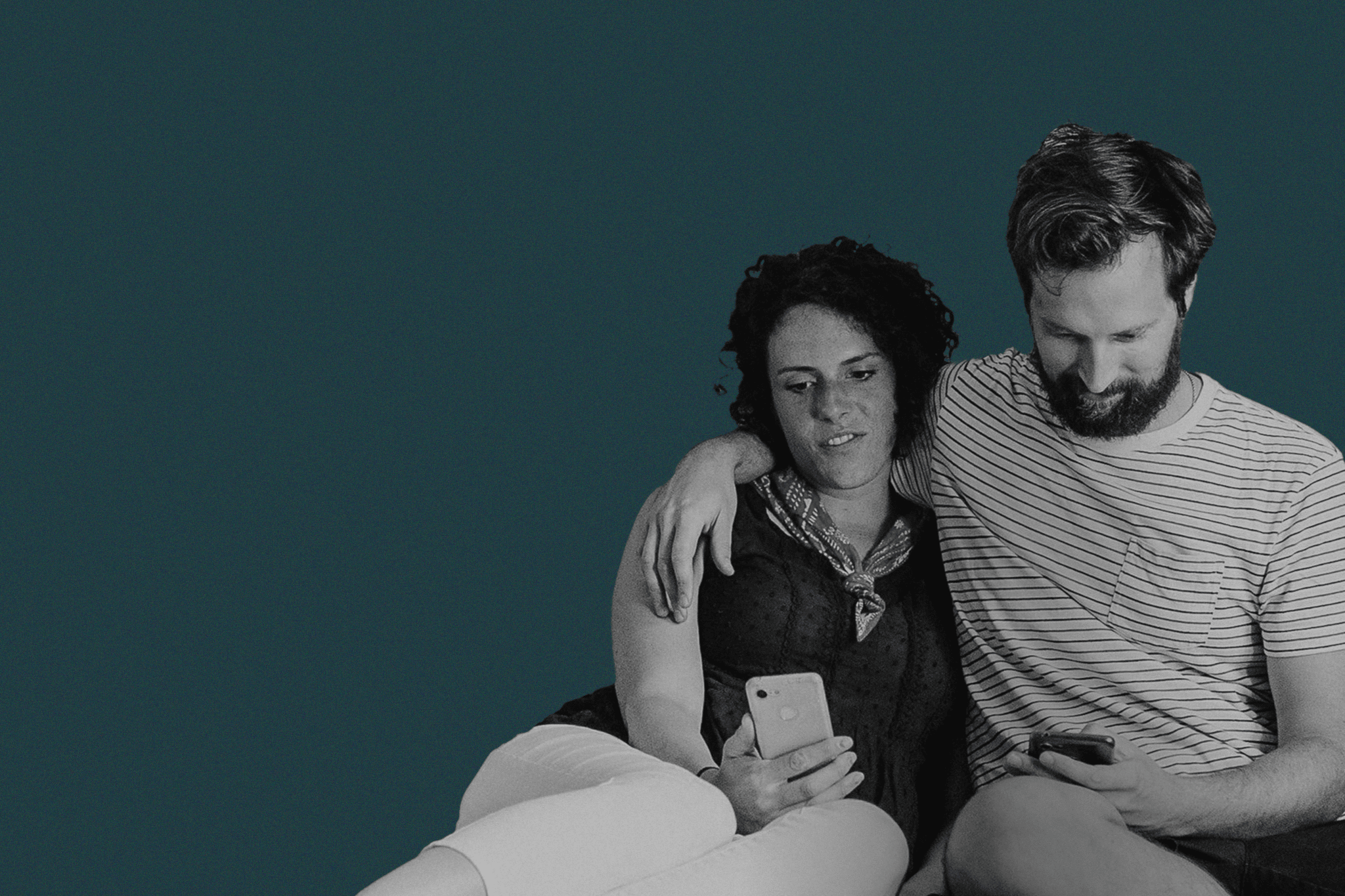