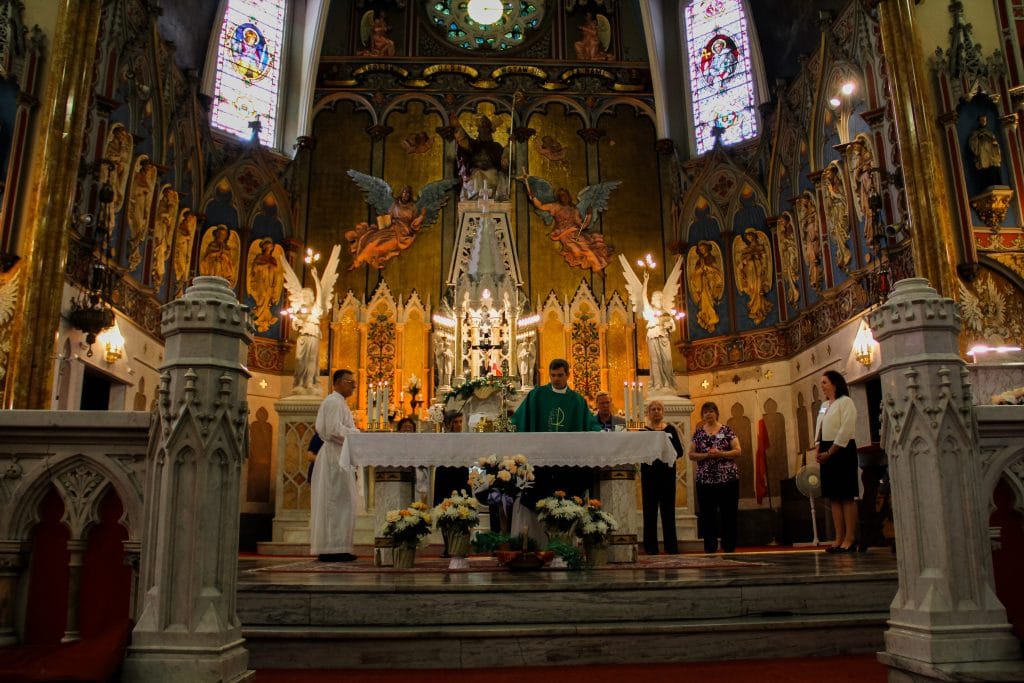 “It’s the Mass that matters.”

In early 20th century England, a politician used a rallying cry against English Catholics at a time when they were largely ostracized. This rallying cry found a ready audience, not only with those sympathetic to the politician’s anti-Catholic position, but also among Catholics themselves. These Catholics turned the politician’s words into a slogan that succinctly expresses the essence of their faith: “It’s the Mass that matters.”

It’s the Mass that matters. How those words touch a chord in American Catholic hearts today, when so many now find themselves unable to attend Holy Mass. The state of emergency created by the COVID-19 (“coronavirus”) outbreak has made it imprudent, in the judgment of many Church leaders, medical experts and politicians, to celebrate public Masses for the next few weeks.

There are many good articles already articulating the reasoning behind the suspension of public Masses, as well as offering inspiring advice about how to make a spiritual communion and to spend the Lord’s Day at a time when participation in Mass is impossible. In this article, I would like simply to reflect a bit on the gift of the Mass, the greatest gift we have from God in this life.

This is an extremely difficult time for Catholics who love and depend on the Mass, which is the “source and summit” of our lives as followers of Christ and members of his Church. But good fruit can come even from such heavy crosses, perhaps especially from our heaviest crosses. And one kind of good fruit we can cultivate now is a renewed love for the Sacrifice of the Mass and a hunger for the sacrament of Holy Communion.

About 20 years ago, I had the tremendous blessing of visiting Ireland for the first time. Being 100 percent Irish, I had always wanted to visit the land of my ancestors. And as I was touring the country, I was very much impressed by all of the predictable experiences: the graciousness of the Irish people, the beauty of the landscape, the neat stone churches and cobblestone streets and even a few Irish pubs. But the object that provoked the greatest sense of wonder in me was something I never would have predicted.

One day, I was touring a village church in County Clare with some Irish relatives of mine, distant cousins. It was the church in which my great-grandmother had been baptized and received her first Holy Communion. In the back of the church they showed me what they described as a “wheelbarrow chapel.” What I saw was a wooden-frame chapel mounted on a platform of about 4 feet by 8 feet, with wheels and handles more or less like those of a wheelbarrow.

I had never seen such a thing before, so of course I asked my cousins what the purpose of this unusual chapel was. They told me the story of a time, during the English occupation of Ireland, when the celebration of Mass was strictly forbidden. The penalty for those caught attending Mass was the seizure of their food vouchers. The vouchers were government-issued tickets redeemable for what was the only food available in Ireland at the time. Lose the vouchers, and your family lost its food: a very simple, and very severe, penalty.

The penalty for those caught attending Mass was the seizure of their food vouchers. The vouchers were government-issued tickets redeemable for what was the only food available in Ireland at the time. Lose the vouchers, and your family lost its food: a very simple, and very severe, penalty.

But the people of this village, like so many people throughout Ireland, were good enough to treasure spiritual food more than physical food. And so they built the wheelbarrow chapel. Late at night, the people would pull the chapel down to the seaside — the only place that offered even a reasonable degree of secrecy. There, under the cover of darkness, a local priest would step up into the cramped chapel and celebrate the Mass in sotto voce, a voice so low as to approach a whisper, for the villagers huddled around their tiny new parish church.

We can only imagine the contrast between the intensity of the prayers of the Mass as they welled up in the hearts of those people and the soft murmuring of their actual voices. And we can only imagine the devotion with which they received the Bread of Life, knowing it was at the risk of losing their only earthly bread.

Stories of celebrating Mass under conditions of persecution are many and riveting. Persecution was such a regular part of life in the early Church that there was a name used for the hidden nature of the Mass: the disciplina arcani, or “discipline of the secret.” And this need to “go underground” has been a recurring theme throughout the centuries, even down to our own age in places where practicing the Catholic Faith is forbidden. The late-Jesuit priest Fr. Walter Ciszek, who was a prisoner in Soviet prisons and Siberian labor camps for 23 years, from 1940-63, tells the story of a rare opportunity he had to celebrate Mass while in the Dudinka prison camp.

In his book With God in Russia, Fr. Ciszek writes:

“That first night, they brought us a half liter of soup apiece and two hundred grams of kasha, plus hot water. We wolfed it down. Then everyone collapsed on the plank bunks like a company of dead men. After years in prison with little exercise, this first day of hard work had been torture. My muscles were too numb even to ache; every sinew felt like a piece of twine that had been unwound and shredded into string …Toward the end of the first week in Dudinka, Fr. Casper came looking for me in the barracks one night. Some of his Poles had told him there was another priest in the camp. He found me before I had a chance to look him up and asked me if I wanted to say Mass. I was overwhelmed!  My last Mass had been said in Chusovoy more than five years ago. I made arrangements to meet him in his barrack the next morning as soon as the six o’clock signal sounded.

“The men in Fr. Casper’s barrack were mostly Poles. They revered him as a priest, protected him, and he tried to say Mass for them at least once a week. They made the Mass wine for him out of raisins … the altar breads from flour ‘appropriated’ in the kitchen. My chalice that morning was a whiskey glass, the paten to hold the host was a gold disc from a pocket watch. But my joy at being able to celebrate Mass again cannot be described.”

Today, in an age when many people are tempted to prefer flashy church services with very obvious emotional outreach, now is a good time for us to see with fresh eyes the beauty and the genius of the Mass, in which the most powerful mysteries of God are communicated to mere mortals, by means of a ritual beautiful enough to be fittingly celebrated in the majesty of St. Peter’s Basilica, but also simple enough to be celebrated in a wooden chapel mounted on a wheelbarrow on the beaches of Ireland; a ritual grand enough to be celebrated by hundreds of thousands of people at every World Youth Day, but also brief enough to be memorized, so that devout priests could write the prayers down from memory and celebrate with only a few huddled prisoners in a Soviet labor camp; a ritual contemporary enough to be celebrated in each of our parish churches, in situations normally free of any palpable tension, but also traditional enough that we do — in substance — the very same thing done 2,000 years ago by Our Lord, on that night of unspeakable tension, when He would be betrayed by one of His best friends, the night before He would die for us.

“Do this in memory of me,” Jesus told His apostles that night. And the gift, mystery, and the duty of the Mass first entrusted to the apostles has been handed down from generation to generation of Catholics ever since, down to our own day. Each Sunday, we have the inestimable privilege to gather not merely to remember what Jesus did, but to do what He did. And we “do this” in the kind of remembrance of Him that makes Him present to us once again — present in a way that is more perfect, more complete than any other way we find Jesus present in our world. It is what Pope St. John Paul II has called the presence of Jesus par excellencein our world.

In our time, of course, we face, not the swords or guns of persecutors, not the fear of capture or starvation, but only a little inconvenience, the need to give up just a little time: sacrifices so small that those who have been persecuted would certainly pray, and perhaps would even weep, for us if they knew how easily our generation is distracted from what is essential.

Yet now we face an acute suffering, a deprivation the likes of which none of us who are lifelong Americans have ever known. Public Masses have been suspended, and we are invited to fast, and pray, and to discover once again the riches of divine grace we have too often taken for granted.

And so, may we who under the ordinary circumstances of our lives enjoy the privilege of celebrating Holy Mass in peace and freedom never be tempted to use words like “boring” to describe it! May we never again think of other things as more important, but, rather, may our hearts burn with thanksgiving for the awesome gift of celebrating Mass, of receiving Jesus’ Body and Blood, and, to use the words of St. Paul, of proclaiming the death of the Lord until he comes, the death that, at every Catholic altar, brings us new life.

Fr. Charles Fox is a priest of the Archdiocese of Detroit currently assigned to the theology faculty of Sacred Heart Major Seminary. He is also a weekend associate pastor at St. Therese of Lisieux Parish in Shelby Township and chaplain and a board member of St. Paul Evangelization Institute, headquartered in Warren.

This article was originally published on Detroit Catholic.