Pilgrimage to the Center of the World 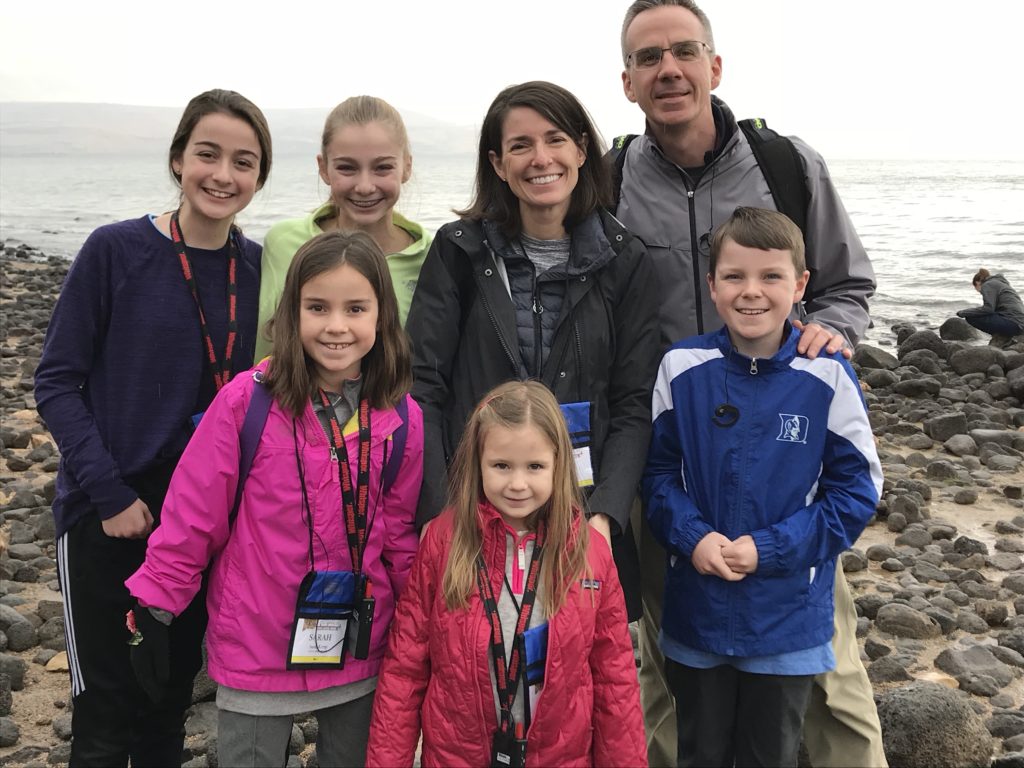 There is a stone marker in the middle of a large hall in the holiest place on earth.

Pilgrims often overlook the marker — it’s just knee high and shaped like an urn — as they seek out the rock of Golgotha and the tomb of Christ in the Church of the Holy Sepulchre in Jerusalem.

Medieval mapmakers would depict the nations circling the holy city of Jerusalem — the ultimate “still point of the turning world,” to quote poet T.S. Eliot. The marking stone is also a symbolic center of a powerful spiritual attraction.

The lure of the Holy Land drew Abraham to found a Jewish homeland and drew Jews from across the world to begin a new nation. Jerusalem has drawn millions of Christian pilgrims to itself since Rome legalized Christianity in the early 300s, and it continues to call pilgrims despite the region’s political strife.

In December 2017, this millennium-old attraction unexpectedly drew the family of Harry and Leslie Kemp, parishioners of the Shrine of the Little Flower in Royal Oak, on a moving eight-day Christmas pilgrimage to the Holy Land that continues to touch their lives today.

“I wasn’t sure if the timing was right,” Leslie says about the pilgrimage friends had been encouraging her to consider for months. Leslie recalls how she and Harry would discuss taking the family to the Holy Land someday, just not any time soon. After all, their children ranged in age from 14 to 5. Wasn’t it a little early to take Elizabeth, 14, Katherine 13, Joseph, 10, Sarah, 8, and Margaret, 5, on an overseas pilgrimage?

On the other hand, Harry and Leslie often take weeklong trips with Catholic families who are committed, as the Kemps are, to providing a faithfully Catholic home life for their children, so a “holy vacation” is not something out of the ordinary.

“So the idea of taking the kids on a trip surrounded by friends was appealing,” Leslie says. But after wrestling with the decision, Harry and Leslie agreed this bucket list item would have to wait.

Or so they thought.

The enrollment deadline had almost arrived when Harry decided to attend noon Mass at Transfiguration Parish.

“I remember going to Mass and not having a revelation, per se, but walking away afterward with this prayer very much on my heart: ‘We should do this.’”

Leslie attended Mass the next morning. The Gospel passage quietly, persistently remained with her: “Let the children come to me.”

“Until that point, we had let our minds take over: It’s too expensive, it’s too much work,” Leslie relates. But after comparing their words of confirmation and taking the issue to prayer, the decision became clear.

“The Church of the Holy Sepulchre is the most impactful place in history,” Harry states as we discuss the symbolism of the center of the world stone.

Although the lines of pilgrims approaching the crucifixion and resurrection sites are long, the payoff is profound. You can literally touch the stone upon which Christ died and enter the sepulchre from which he rose.

“To be there is surreal,” especially while praying within the tomb, Harry says. “To put it into words … it felt like home.” While hunched inside this holy space, the words of St. Peter on the Mount of Transfiguration immediately came to Harry’s mind: “Lord, how good that we are here” (Mt 17:4).

“The most memorable place for me?” Leslie’s answer comes quickly: iIt was “standing right between Golgotha and the tomb, where Mary stood beneath the cross.”

Leslie describes, almost to tears, meditating at the Place of the Holy Women, which commemorates the three Marys who remained with Jesus until the end (Jn 19:25).

“Thinking as a mother, I said prayers for my family, but particularly for moms who have lost their children.

“I felt so connected to Mary … It was very powerful.”

The Christmas pilgrimage included about 100 people, many of them children. The sponsor of the journey — Pilgrimages by Corporate Travel — wisely inserts recreational time for young people into the eight-day itinerary.

The Kemp children enjoyed a break from holy site visiting when they traveled into the desert near Jericho to ride Sammy the camel.

“When we mounted Sammy, we had to hold on to each other to not get flung off,” Elizabeth explains. “And while we were riding, we all took our hands off and tried to ride with no hands. It was fun!”

“We also talked about the wise men riding camels to visit Jesus,” adds Katherine. “It was fun, but it was religious, too.”

One joyful experience happened spontaneously. The pilgrims had gathered to listen to a lecture outside the church that surrounds the traditional home of St. Peter in Galilee. The young people naturally began to gravitate toward a grove of olive trees nearby — and perched in the branches while listening on their headphones.

“The speaker gave them full permission to climb and have fun,” Leslie laughs. “They were just like kids would have been when Jesus was there.”

The Weight of Love

Guides Steve and Janet Ray often schedule events in the early morning to avoid the crowds. An example is a 3 a.m. walk through the winding streets of Jerusalem’s Old City along the Via Dolorosa, the Way of Sorrow, praying at the 15 stations of Christ’s passion.

“It was sad hearing about what Jesus suffered,” Sarah remembers. “It was exactly like you were there with Jesus.”

Harry experienced an unexpected moment of grace during the walk. Little Margaret couldn’t stay awake, so Harry lifted her up and carried her the entire way.

“It was a joy, but honestly, it was not easy,” Harry recalls. “I was given a sense of the weight of which God was carrying us.”

Open to the Unexpected

Two years have passed, but the Kemps still carry with them the blessings received in the Holy Land.

Elizabeth feels closer to Jesus when she envisions the places where he was born and died. For Katherine, reliving the events of Jesus’ life helps her feel more engaged when reading the Bible. Sarah would like to go back again “because I would be more mature and experience it in a different way.”

“My teachers loved hearing about it and my friends, too,” Joseph says. Sharing his experiences, such as praying shoulder to shoulder with Jewish worshippers at the Western Wall, motivated his friends to learn more about the Holy Land, he adds.

Leslie has encouragement for parents considering a family pilgrimage.

“So many people on the trip said to us, ‘Oh, I wish I had done this when our kids were in the house,’” she says. “Even if you don’t feel like you’re ready for an extended pilgrimage, use the opportunity of a normal vacation to visit a holy site.

“There are going to be bumps on a pilgrimage. Just be open to the graces God is going to pour out in unexpected ways.”