“It’s very important for us that we do this very soon,” says Daniele Martins Gimenes about the baptism of her baby boy. But there’s been an unexpected delay. 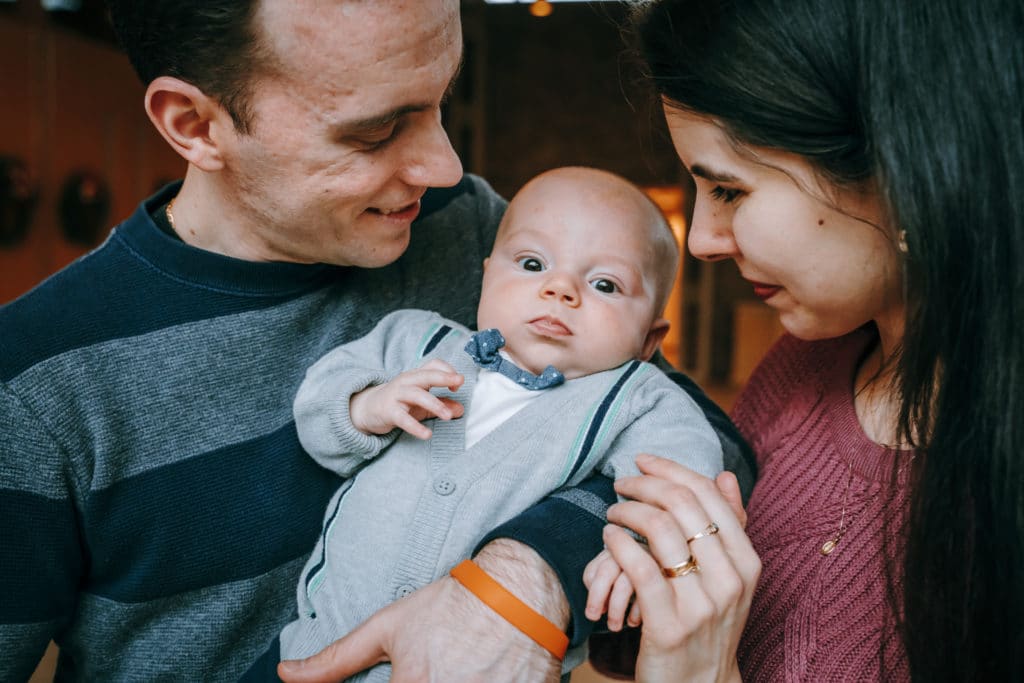 “It’s very important for us that we do this very soon,” says Daniele Martins Gimenes about the baptism of her baby boy. But there’s been an unexpected delay.

Their pastor at St. John Vianney in Shelby Township is on medical leave for cancer treatment — and both Daniele and her husband, Fernando, have agreed to postpone the baptism until April to give Father Timothy Mazur the chance to baptize their months-old baby, Miguel Gimenes Andrecioli.

They have a special reason for requesting that Father Timothy administer the baptism. Daniele and Fernando, who married in 2010 in their hometown parish of São José in Gália, Brazil, tried for seven years before they were able to conceive.

In 2014, the Gimeneses moved to Detroit for Fernando’s work, and they say it was providential that they ended up as parishioners at St. John Vianney. “Our parish made a huge difference in our process to move to a different country and establish our residency here,” Fernando says. “We felt welcomed and at home.”

Daniele was quickly able to learn English with the help of parishioners who were eager to practice with her. “It was a blessing for us,” Daniele says. Friendships amongst the parishioners quickly formed, but one of the most influential was the friendship with Father Timothy.

“It all started when Dani had her surgeries scheduled,” Fernando says of the operations they hoped would help Daniele conceive naturally. “After Mass we talked with him, and we asked for the sacrament of anointing because she was going for surgery.”

From there, Daniele began regularly going to confession, and Fernando soon followed suit. Fernando says it helped that the Catholics at their parish were deeply engaged in their faith. Daniele and Fernando were able to join Bible study groups and found other opportunities to learn about their faith.

The Gimeneses say the spiritual direction and confession opportunities with Father Timothy worked as a form of marriage renewal. “We told him our story,” Fernando says. “I think it was healing for us, for our marriage and for us as a couple.”

In the Hands of God

Daniele is grateful that Father Timothy kept their faith strong. “He didn’t allow us to be hopeless or give up on having a child in the natural way — and he told us to wait on God’s timing.”

Still, some doctors were discouraging. “Some doctors told us that it was almost impossible for us to conceive naturally,” Daniele says. But she and her husband rejected in vitro fertilization.

“We believe that when the cells come together and form the first cell, life begins. It’s a new life and it’s a new soul,” Fernando explains. “We know that with IVF they freeze the eggs, and that’s like freezing a life. We didn’t think that was right.”

Looking back, Daniele and Fernando say the seven-year journey to having a child was a gradual surrender to God’s will. “In the course of seven years, I found myself closer to God. My relationship with God grew a lot,” Daniele says, adding, “In the beginning, it was hard to accept that I didn’t have a baby.”

Shortly before Miguel was born, she remembers thinking, “It’s OK if I don’t have a baby. I’m OK. I’m happy. My life is good. God is good.”

Fernando agrees. “We got to the point where it was entirely in the hands of God. We did our best that we could, and now we just have to trust in God that he provides us with whatever he wants,” he says. “And I think we got to that point over the course of seven years.”

Daniele and Fernando agree that they grew in their faith from the experience. Throughout their journey, Fernando says he was grateful for his wife’s example. “I always felt like Danny was the person who led me back to the church,” he says, recounting that he initially attended Confirmation classes as a teenager only to be with her.

Daniele says baptism is the most important thing in our lives. She looks forward to her son’s baptism, saying, “It’s the moment when he will be washed from original sin, and it’s the beginning of his spiritual life.”

Miguel’s godparents are set to fly in from Brazil in April for the baptism — another reason for the couple’s decision to postpone the event. Baptisms in Brazil are an important family celebration, bringing everyone together. Since it will be impossible for their entire family to travel to Detroit for the occasion, the Gimeneses plan to broadcast the baptism to their family in Brazil.

Daniele notes that Father Timothy isn’t the only priest who supported them in their journey. “We have two special priests in our story of Miguel,” she says.

About a year ago, before Daniele was expecting, Father Stephen Pullis, the director of evangelization, catechesis and schools for the Archdiocese of Detroit, stopped Daniele and Fernando after Mass and said that while he was praying, God had told him to go to dinner with them.

Fernando says they were happy to invite Father Steve to their house for dinner. Afterward, they asked him to bless their house. He made the rounds with holy water, blessing the windows, doors and every room in the house.

“We felt so peaceful after,” Fernando says. “It was a really nice sensation. I felt like I was clean.”

Their years of praying didn’t stop after Daniele and Fernando learned they were expecting. They needed a baby name.

“We were praying constantly about it,” Fernando recalls. One day, while in the waiting room to learn the baby’s sex, they were still undecided about a boy’s name. “It came to us, something whispering in our ear saying, ‘You should call him Miguel.’”

Fernando immediately turned to his wife and said, “We should call him Miguel.” And she said, “I like Miguel.” She notes that the name could easily be pronounced by their Portuguese-speaking family and their new English-speaking friends.

St. Michael the Archangel had always been their family’s patron saint, Fernando says. “We always were praying for his intercession, to protect our family, so when they did the ultrasound and it was a boy, we thought, ‘Wow, that’s amazing.’ We had been struggling a little bit to find the name.”

Father Timothy also has a special devotion to St. Michael the Archangel, and his grandfather, with whom he was close, was named Michael. “When we went to tell Father Timothy that we were having a boy, and his name would be Miguel, I saw some tears in his eyes,” Fernando says.

The Gimeneses are slowly making preparations for Miguel’s baptism. “At Father Tim’s last Mass before he went on leave for his cancer treatment, he was very adamant that he would be back to baptize Miguel,” Fernando says. “So that is our hope.”

Adds Daniele, “I always say that Father Timothy is the American grandpa of Miguel.”