Spontaneously Sharing the Love of Christ 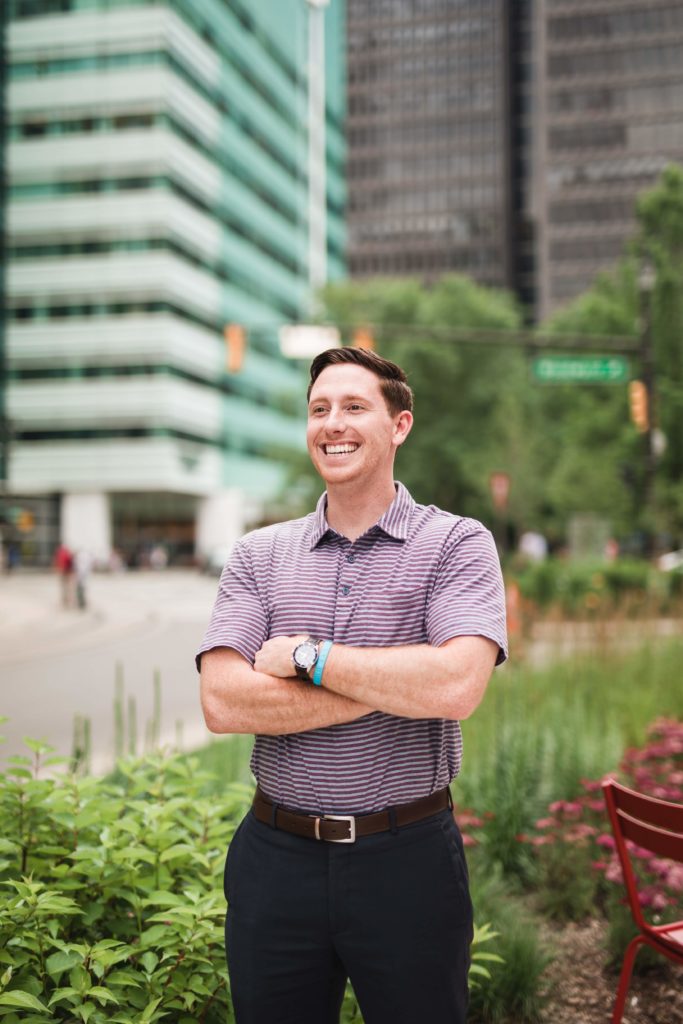 It all happened on a dance floor in a bar in downtown Detroit.

The music was loud, the lights were bright and people were lost in their dancing when Jordan Beachnau happened to notice the words on a woman’s sweatshirt. It was a short but poignant message: “Jesus can’t save you.”

Jordan kept dancing, working his way closer to the woman. When he got to where she was dancing with her friends, he smiled and handed her a necklace with a Miraculous Medal of Mary.

“I apologized, saying, ‘If any Christian has hurt you, I’m sorry,’” Jordan recalls. “‘That is not what Jesus would have done. He said he’d rather die than live without you.’”

A simple gift, a simple greeting, a powerful message. It’s the kind of encounter that seems to happen a lot for Jordan, a parishioner at St. Mary in Royal Oak.

An accountant for Deloitte in downtown Detroit, the former Grand Valley State University wide receiver and quarterback has a sports-like mentality when it comes to evangelization: You only get good at what you practice.

“There are people who don’t know the love of Jesus and the truth and goodness of the Catholic faith, so you have to meet that person with love,” says Jordan, 27. “I don’t know of anyone who ever converted because of an argument.”

Raised in the Lansing suburb of Holt, Jordan was baptized Catholic, but his family rarely practiced. He lived a “typical secular lifestyle” at Grand Valley, where he majored in accounting and attended a nondenominational church. He moved to Royal Oak in 2015 after getting his job with Deloitte, and everything was going pretty much according to plan.

Then, Jordan received a surprising text message from his sister, Nicole.

“The text said, ‘I’m going to the RCIA program at St. Mary’s. It’s a Catholic church,’” Jordan remembers. “She asked me to join, and I said, ‘No, I’m good.’ But I decided, ‘I will go until I hear something that’s wrong, and then I’ll leave.’ I was there to support my sister. After months of questions, podcasts and bugging the crap out of Father Paul (Snyder, pastor at St. Mary), I came to know this was the church Jesus founded.”

Jordan entered the church at Easter of 2017, but his journey was really just beginning. He started listening to Catholic podcasts and reading apologetics, enthralled by people’s individual testimonies. Personal witness became such a powerful part of Jordan’s journey that he wanted to share his own with everyone else — friends, family, coworkers, strangers at Trader Joe’s.

“It does take courage the first time praying with somebody,” Jordan says. “I thought at first, ‘I’m going to pray with people I’ll never see again.’ The next thing you know, I’m praying with family and friends, praying with people I see at Trader Joe’s. It’s all natural now.”

Jordan even started a podcast, “Crossing the Jordan,” to talk about his experience praying with people and explaining the faith.

“I was in a Walmart with a guy in the checkout,” Jordan says. “He was talking about how the church isn’t a building. I said, ‘You know, I used to be really anti-Catholic, too, but not after reading all these things. I’m now Catholic.’ I gave him a card with my podcast and said I’d be praying for him.” 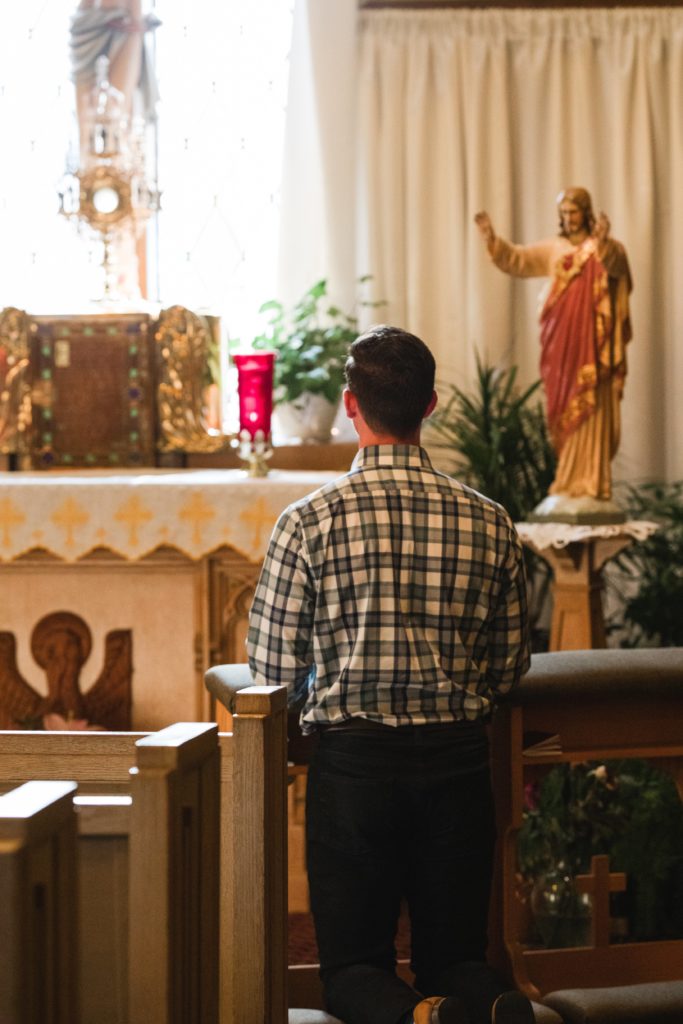 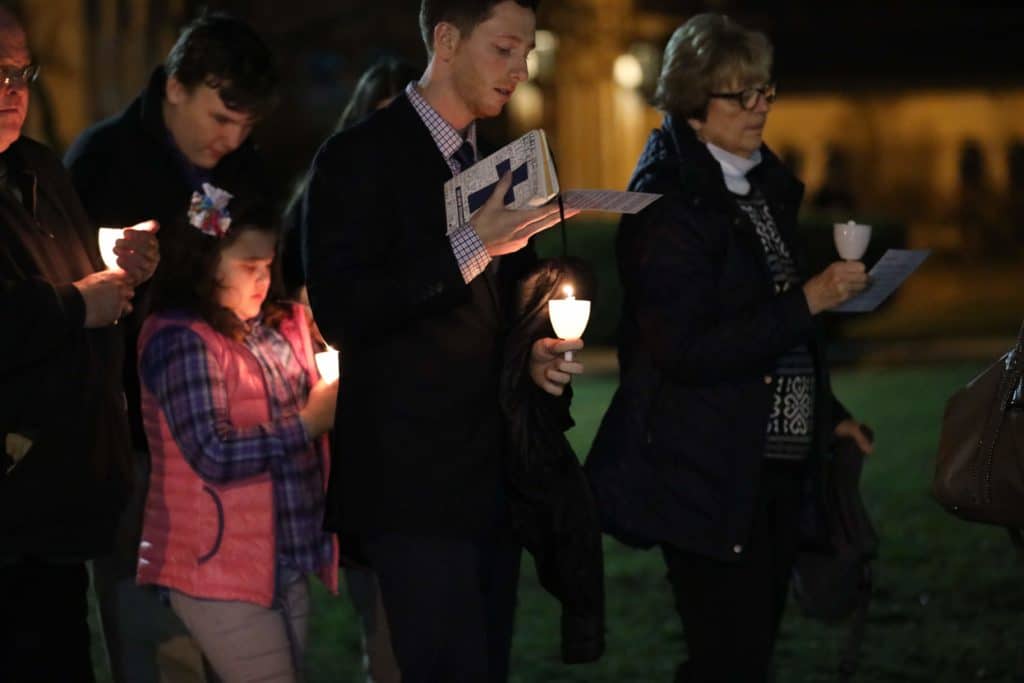 Empowered by the sacraments

Jordan doesn’t plan these meetings with strangers; they happen organically. Since coming into the church, he feels comfortable talking about Jesus with people he meets. He joined Young Catholic Professionals in Detroit and the Brighton-based Encounter Ministries to have more opportunities to share his faith.

“In YCP, you become part of a community, and it is encouraging to see other people’s faith,” Jordan says.

“He was just open, personally, always asking, ‘How are you doing?’ ‘Are you good?’ ‘Is your soul good?’” Molnar says. “There is a genuine care about him. Every time I see him at a YCP event, it is ‘Hey, how are you? How is your day? Can I ask to pray with you that Jesus could heal you?’

“I remember last year, we had this opportunity to go to Archbishop Vigneron’s gala to work the Catholic Foundation table,” Molnar recalls. “We were sitting there, and there was this security guard at Cobo Center. Jordan just walked up to her, asking how she was, handing out a Miraculous Medal. Then this woman just opened up about her son. That’s the effect Jordan has on people.”

When talking about God with people on the streets or in the office, Jordan doesn’t dive into deep theological details. Sometimes it’s just sharing that he went to daily Mass or describing an experience he had at eucharistic adoration.

“What is so beautiful about being Catholic is your life is completely strengthened by God’s grace and the sacraments,” Jordan says. “We feed on the bread of life in the Eucharist. When we fall from grace, we have the sacrament of reconciliation. But these are not one-and-done things. We are supposed to move from there, empowered to live out the Gospel.”

For many Catholics, that daily choice to tell strangers about Jesus can be intimidating; Jordan is the first to tell you he talks more than most. But Jordan advises that there are other ways to witness.

“What is beautiful about being Catholic is we have a communion of saints that look completely different,” Jordan says. “A person who is a doctor of the church, St. Therese of Lisieux, hardly ever spoke. Then we have St. Dominic, who went to the ends of the world preaching Christ.”

For Jordan, having that honest conversation about Christ in the streets is his charism.

Shortly after joining the Church, Jordan discerned the priesthood, even attending a discernment weekend at Sacred Heart Major Seminary. But then, during a pilgrimage with some friends to Lourdes, France last year, Jordan felt called to marriage. The group then traveled to Spain to continue their pilgrimage walking the Camino de Santiago, one of the oldest Christian pilgrimage routes that ends at the Cathedral of Santiago de Compostela.

Jordan’s college friend Napoli Oraha also made the trek and the two began dating after the journey. Now, they’re engaged and planning a future together. For guidance, Jordan maintains a close relationship with priests, especially his pastor. “The Church is the beautiful family in communion, and with the priests I have in my life, I feel I have a great relationship with them where they are friends first,” Jordan says. “They are supporting me, and we’re walking together. Father Paul Snyder is a friend of mine, and we constantly support each other in an authentic relationship. Me and my future wife go to dinner with him. We want to have a family where it is natural to have priests over for dinner.”

From a college quarterback to a Camino pilgrim who invites priest friends over for dinner — it would be quite a transition for most people! But Jordan doesn’t think there’s anything special or out of the ordinary about his witness to Christ.

“Jesus wants to give us a divine light, the Holy Spirit life, and to do that is to will the good of the other,” Jordan says. “So, what is good for the person in front of me, whether they are a stranger I just met or a friend I’ve known for years? If I want what’s best for this person, I want them to have Jesus, and it’s all rooted in love.

“It’s how you communicate with people,” Jordan adds. “It means being rooted in our faith, first and foremost, and making that decision to love this person. It means being gentle, humble and having that relationship with Jesus, building that relationship with the person across from you. And from there, the Holy Spirit does its work, where you just want to share that love with everyone else.”