The Finest Thing This Side of Heaven 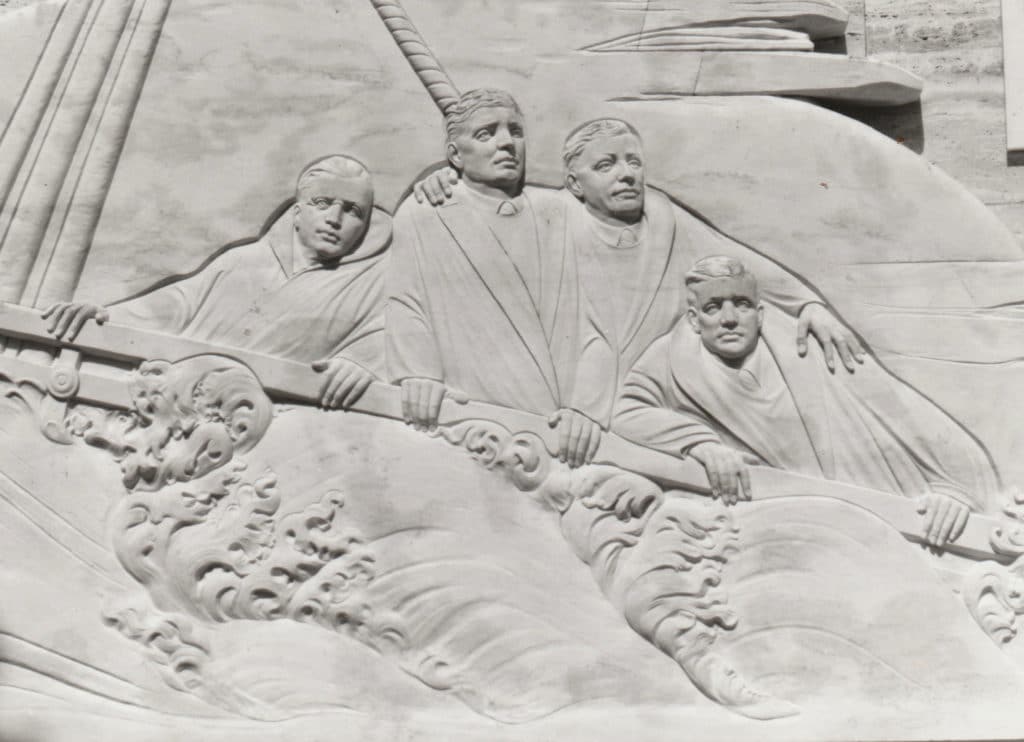 Most books on inter-religious dialogue simply record the actual dialogue. They seek to preserve the honest exchange of ideas that typifies interfaith relations at their best.

A few years back, I received an interfaith book of a very different sort, and I would like to share its story with you because I had never heard it before I saw this book.

The story begins like a bad joke: “There were two ministers, a priest and a rabbi …” But the narrative takes a serious turn quickly.

It was World War II and these men of God were military chaplains on the U.S. Army troop transport ship SS Dorchester. They were on their way from Newfoundland to an airfield in Greenland along with 904 soldiers, sailors and civilian workers when the ship was hit by a Nazi torpedo Feb. 3, 1943.

What happens next takes interfaith relations well beyond the realm of words into the realm of deeds—the heroic act of four men who have become known as the Four Immortal Chaplains.

Who are the immortal chaplains?

George Fox was born in Pennsylvania and enlisted in the Marines during World War I, in which he served as a corpsman. He attended the Moody Bible Institute and Boston University School of Theology and was ordained a Methodist minister in 1934. Rev. Fox was serving a congregation in Vermont when World War II broke out. He enlisted as a chaplain and eventually was to be stationed at Camp Tauton in Greenland.

The oldest son of a rabbi, Alexander Goode was born in Brooklyn, N.Y., and grew up in Washington. He became a rabbi in the Reformed tradition, having attended the University of Cincinnati and Hebrew Union College. He served Temple Beth Israel in York, Pa., while pursuing a medical degree at Johns Hopkins University in Baltimore. As a chaplain in the U.S. Army, Rabbi Goode was unhappy being stationed stateside and pulled some strings to get assigned to Greenland.

Clark Poling was the son of a minister in the Dutch Reformed tradition. His father moved the family around frequently while Clark was growing up. Poling attended Hope College in Holland, Mich., and Yale Divinity School before being ordained like his father. Before going overseas, Rev. Poling asked his father to pray that his son would have courage.

John Washington was an Irish thug from Newark, N.J. Becoming an altar boy and singing in the choir began to transform him until he discerned he had a vocation to the Roman Catholic priesthood. He was educated at Seton Hall University and Immaculate Conception Seminary and was ordained a priest in 1935. Father Washington served several parishes in the Archdiocese of Newark before enlisting in the Army as a chaplain. He trained at Fort Benjamin Harrison and was then assigned to go to Greenland.

A torpedo at night

Voyages through the North Atlantic are always unpredictable, but this time the danger was magnified by the presence of German submarines. The Dorchester, a converted luxury liner, was accompanied on its way to the Greenland military base by two freighters and three U.S. Coast Guard cutters, including the Escanaba, which was stationed in Grand Haven, Mich. (The Escanaba itself was sunk only four months later, with just two survivors.)

To be ready if the worst happened, the men on the Dorchester were ordered to sleep in their clothes and to wear their life jackets. Tragically, comfort triumphed over safety below decks that night.

What happened next has been the subject of a documentary and several books. One such book, No Greater Glory: The Four Immortal Chaplains and the Sinking of the Dorchester in World War II, by Dan Kurzman, brought this story to my attention. The events have been immortalized in stained glass at the Washington National Cathedral’s War Memorial Chapel and at the chapels at West Point and the Pentagon, among other places.

The story that began like a bad joke ended like a Shakespearean tragedy. After the torpedo hit and the order to abandon ship was given, many of the men rushed onto the deck of the ship without their life jackets. They were met by the four chaplains, who calmed the frightened, helped the wounded and guided the men to lifeboats. The chaplains began handing out whatever spare life jackets were available. When the last of the jackets were gone, they gave out their own.

“It was the finest thing I have seen or hope to see this side of heaven,” survivor John Ladd said of the selfless act.

“I could hear men crying, pleading, praying,” remembered William Bednar, another of the 131 sailors who survived the ordeal. “I could also hear the chaplains preaching courage. Their voices were the only thing that kept me going.”

As the Dorchester plunged into the icy waters of the North Atlantic, witnesses saw the four chaplains at the rail locked arm in arm, each praying in his own faith tradition. 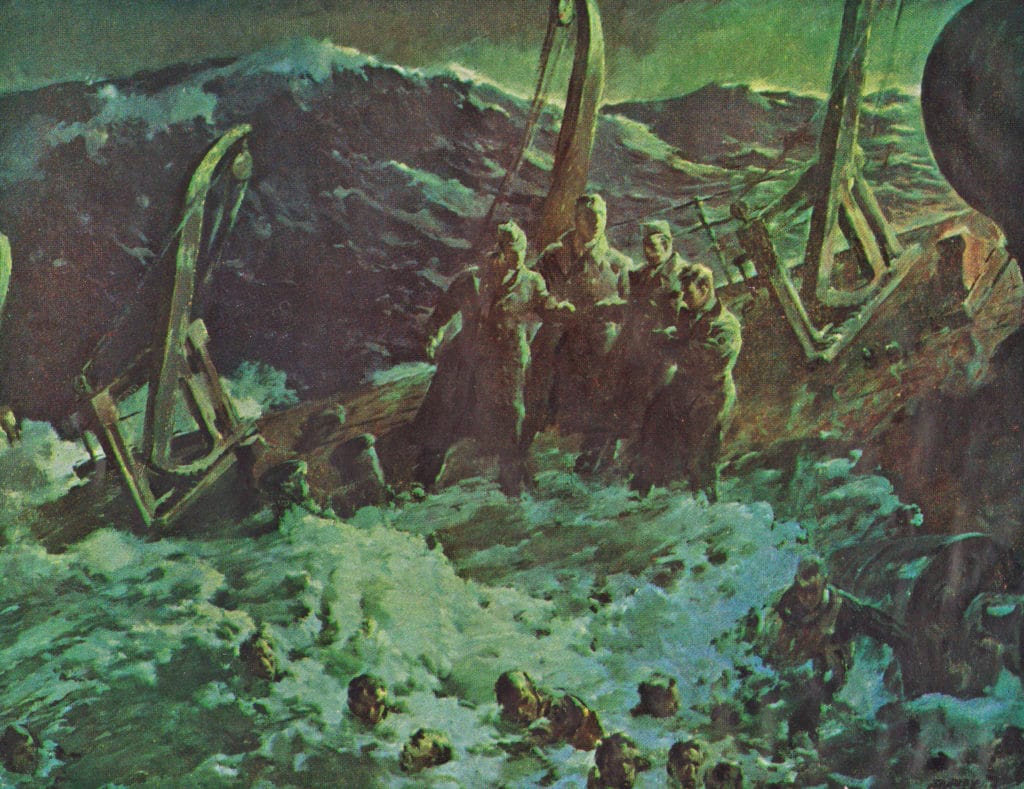 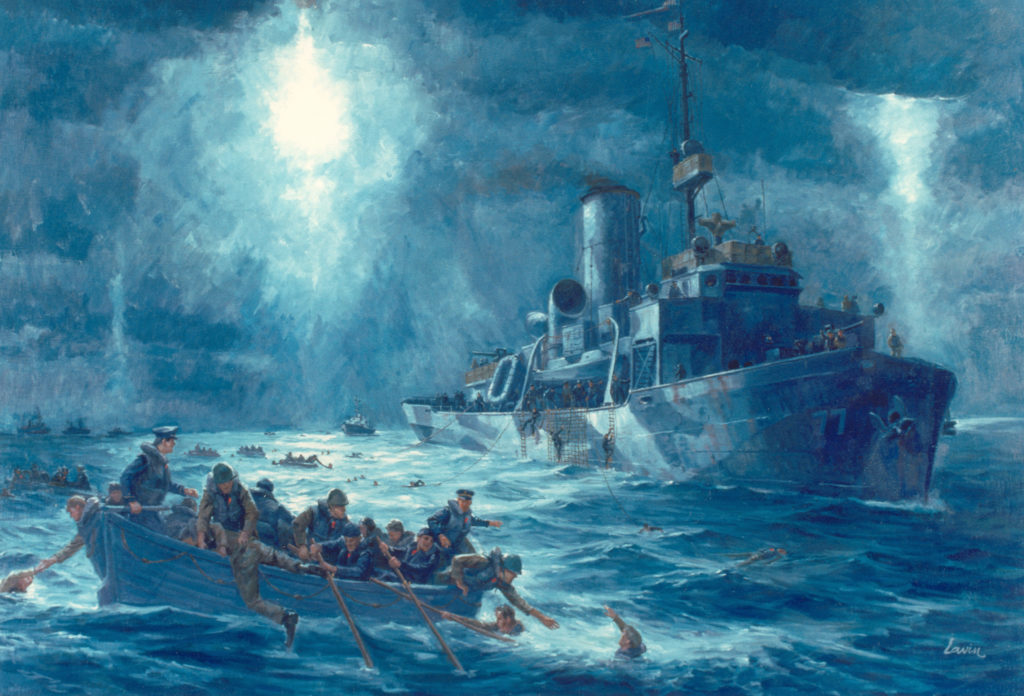 This final image of the chaplains, for me, speaks volumes about the nature of inter-religious dialogue. While words help build bridges to understanding between people of differing faiths, it is ultimately the deeds of those people that enable the bridges to be crossed. The saga of the Four Immortal Chaplains is about the fulfillment of words by a deed—a deed of four men of different religions who had become friends before this calamity occurred.

I suspect the major reason why this story became popular during the war was that it showed fearlessness in the face of danger. In the military, this fearlessness is called “bravery” or “courage,” as is portrayed in the windows and paintings at various military chapels around the country.

While undoubtedly these men of God were brave, I would propose there is a deeper root to their courage.

In the First Letter of John, 4:18, we read that “perfect love drives out fear.” Though the rabbi in the group obviously would not have considered this letter to be divinely inspired, the same idea has been shown to be present in the Rabbinic Judaism of the first century.

I think the fearlessness of these men was centered in their love for one another as brothers in the Lord, symbolized by their linked arms as the Dorchester sank beneath the waves. The point of making a record of inter-religious dialogue is to inspire deeds of love among sisters and brothers of different religions, like the deed of the Four Immortal Chaplains.